Skip to content
August 1, 2008 in Penthouse See more stories from this title 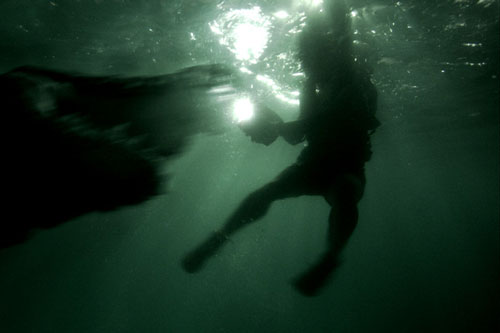 There’s a new new wave in horror. No, that’s not a misprint. The Australian new wave of the 60s and 70s driven by directors like Fred Schepisi, Bruce Beresford and Peter Weir was a defining moment in our cultural history, but a look at the box office of most Australian films of the last decade proves those days are far behinds. There are still gems, but they’re few and far between amongst the Wannabes, You and Your Stupid Mates and Hating Alison Ashleys, and deservedly so.

In 1999 two filmmakers from Maryland picked up a camcorder, sent three actor friends into the forest and turned a passion project worth $40,000 into a $240 million global behemoth called The Blair Witch Project. Suddenly film directors weren’t a professional class living in the Hollywood Hills swimming in pools of cocaine with starlets. Anyone with a camera and an idea could be one.

Of course, The Blair Witch Project wasn’t quite the revolution everyone thought. It just took advantage of immediacy and reach of the web to compress the news cycle. Revolutions in film and horror in particular, from the slasher (Halloween) to the zombie film (Night of the Living Dead) have always come from lone rebels and miscreants working outside the system. As Greg McLean, writer/director of 2005’s tour de force Wolf Creek and 2007’s Rogue, told Australian Penthouse,”Change always comes from the ground up, not the top down.”

As such, there are two reason horror’s so in vogue at the moment. One is Hollywood’s eagerness to turn popularity into cash. The other is because the directors holding the creative — everyone from McLean to Tarantino, Eli Roth (Hostel) to Neil Marshall (The Descent) came of age in the video nasty era of the 1980s, when exploitation and splatter merged to become one of the most enduring genres around. Thanks to the fandom cult of such films thanks to the aforementioned Mr Tarantino. Now, thanks to the aforementioned Mr Tarantino, grimy, back room, exploitation horror is finally big business.

And all the while, fans with cameras continue to shake up the status quo and set the course in movies.

Australia occupies a unique position. With the same culture, business environment and language as the US, we’ve already been voracious consumers of cinema. But we’re neither the ideal territory to consume or emulate Hollywood output. With a population little more than most US states, the gross from the Australian and NZ territories is chump change for most films with a global market. And with so little buying power and no self-sufficient studio system, we can’t wrangle Hollywood budgets. Breakout hits like Wolf Creek, or even films in other genres like Priscilla or Muriel’s Wedding were cheap movies that got lucky (or just had decent scripts and direction, depending on your point of view).

But like no other genre, horror is the one that attracts many emerging directors. Besides being popular, it’s the only genre among the traditionally expensive fields of action or sci-fi where all you need is a recipe for blood and friends who are good screamers. Plenty of Australasian filmmakers started that way, including a certain portly, bearded kiwi who went on to win an Oscar for his Lord of the Rings films.

In 2003, Michael Spierig — half the twin brother writer/director team behind the break-out hit Undead ?explained what a comparatively easy sell their film was to backers and distributors simply because of the genre.”You can make a low budget horror film with no stars and still sell it,” he said,”because the genre’s the star.”

Still, it’s a double-edged sword. Horror’s popular with audiences, particularly the lucrative teen one that will make or break your box office. But while it’s easier to finance than drama (which needs a star attached) or action (that usually needs big money), it’s a crowded field, so you have to do something special to stand out.

So why doesn’t horror have a more natural home in Australia, if it can be done fast and cheap (indeed, that’s the appeal to many fans)? Why the endless string of Look Both Ways, Somersaults, Candys and Septembers that win all the awards but which audiences avoid in droves? Shane Abess thought the same thing when he conceived Gabriel. Though not a horror film, his noir/action tale of angels and demons battling in purgatory took a lot of cues from the genres with Matrix, Underworld and The Crow-like trappings.

“One of the driving forces behind doing Gabriel is because in Australia we very rarely make genre films,” Abess reckons,”and the ones we have haven’t been that good, so we knew we had to raise the bar and do something big, commercial and international.”

Yes, many of our biggest hits, from Crocodile Dundee to The Dish, have traded on a sense of ‘Australian-ness’. It doesn’t always work, and for the occasions where it doesn’t, some cinema institutions like love, excitement or fear are universal. Good horror travels.

That’s what James Wan and Leigh Whannell found out after trying to hawk their film school project around. The two young Melbournians filmed the infamous jaw trap scene that ended up in the 2004 hit Saw, which spawned three sequels and wrote Wan and Whannell’s ticket in Hollywood. The duo couldn’t find an Australian investor and US distributor Lionsgate stepped in, marketing a smash that caused much hand-wringing in Australia at letting these two young talents slip through our fingers at home. Saw was made for $1.2m, average for a ‘big’ Australian movie, but the global $80m haul would have been quite a return for an Australian producer.

So who decides what movies get made in Australia, and why aren’t they making horror movies? Since Wolf Creek, Greg McLean says he gets a lot of praise from peers because now the funding bodies in Australia don’t consider horror a dirty word. It’s easy to blame the funding bodies for the ills of Australian film, but it’s also lazy, according to Tait Brady of the Film Finance Corporation.

He says there’s a culture that sees certain films go in certain directions, and until something sells, he simply doesn’t see similar scripts come through the door for assessment.”We’ve always been market driven,” Brady says,”so if producers come in with projects where they have other funding from sales agents and distributors and so on, that’s what would get them on the table for funding here. And funding from sales agents comes from what’s already selling.”

There’s also the assertion that as soon as a horror film comes through the door of the FFC they snort derisively over their lattes and turn to the next rural, 1960s coming of age story. But Brady claims the assessment process is inherently no tougher on them.”Our program is to support the most interesting, most original films,” he says,”and by definition, genre films can be very derivative.”

Of course, there’s the DIY route, one a good deal of our filmmakers took, many of whom made their name in horror. It’s the method Victorian brothers Luke and Alix Jackson went, self-financing their zombie movie When Evil Reigns to the tune of $5,000. Writer/director Alix thinks the horror resurgence is great, but cautions against one-upmanship.”We’re making a positive step in the right direction, but at least the funding bodies are starting to realise horror is marketable product,” he says.”I just hope our horror films don’t peak and die quickly. These extreme gore films aren’t doing much for the industry as each one just tries to top the last one. Effects don’t make the movie, and Australia has to return to quality storytelling before jumping on this ‘bloody’ bandwagon.”

The expertise is here and the tools are here. When Hollywood realised Australia was a great place to make movies in the late 90s, money flooded our filmmaking economies, giving experienced practitioners room to grow and creating enough employment for a new generation bought up on popcorn blockbusters.

But having no budget is no impediment to a slick product, thanks to plenty of new tools like cheap CGI. The Spierig brothers did the 300-plus effects shots in Undead on their Macintosh. All that’s needed is the idea and the passion to realise it. And whether you’re Peter Jackson doing Bad Taste or Peter Jackson at the helm of Return of the King, the audience will know.

And to extract that kind of heart, we might have the perfect filmmaking industry. Speaking from LA after working on the latest Resident Evil sequel, Russel Mulcahy told Penthouse;”You can do a film for $2m or $20m and you never seem to have enough. But if you do it with enough passion and the idea is timeless and doable you shoot it accordingly.”

“There’s a vulnerability to women,” says Diana Glenn, one of the damsels in distress in Black Water, the latest horror film where hapless humans stumble into the wrong crocodile’s territory.

Penthouse is asking Glenn why women make horror so much more effective. Isn’t it a bit sexist of us as a society?”Maybe,” she agrees,”but it’s a very instinctive reaction. Men have a thing of not showing how they feel, but women make horror a bit more expressive because we tend to scream and cry more when we’re frightened.”

Then there are the girls of Gone, Razorback, Lost Things and countless others. And who can forget the demure, angelic schoolgirls who vanished at Hanging Rock in Peter Weir’s 1975 classic?

In every case, our sense of danger’s been heightened by the sight of the fairer sex in the firing line. A collective lack of faith sisters can do it for themselves, or an instinctive desire to protect the gender that bears the next generation of our species? You decide.