Skip to content
December 2, 2004 in Xpress See more stories from this title 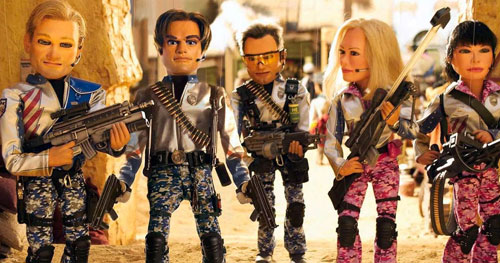 There’s an old axiom in TV advertising — you don’t have to work nearly as hard to get your message across if you do it with humour. You have your Michael Moores, The Corporations, No Logos and Manufacturing Consents. But the sharpest barb yet thrown at the power structure of western society comes in the guise of a puppet show sending up a typical action movie.

An elite American military unit laying waste to nations in the interests of peace — funny? In the hands of South Park creators Matt Stone and Trey Parker, you’d better believe it — the current political climate is ripe for their brand of satire in Team America; World Police.

And make no mistake, under the puerile gags that hold millions of their younger fans in sway, Parker and Stone are satirists; underneath the modern and gross-out frills to most of their stuff, together they’re a 21st century Oscar Wilde, keenly documenting the modern American condition as witnessed by billions but off limits for discussion in society at large.

Stone explains over a very quiet phone line from LA. ‘It’s about the emotions behind all the crap and politics that we’ve heard for the last three or four years,’ he says. ‘The cacophony of confusion we’re up against.

‘There are all these extreme points of view and most Americans are really confused in the middle and the movie’s about that confusion. If you can laugh at the extremes, you can find out what’s wrong with the extremes.’

Team America; World Police is a two-pronged assault. There’s the heavy dose of the sort of subversive, tongue in cheek parody the title suggests, and there’s the comedy that naturally emerges from the use of puppets themselves.

The sex scene is beyond bizarre, the bloodshed farcical, and the shots of physical contact — from varied fisticuffs to a woman trying to hush her lover by putting a finger to his lips and poking him in the eye — hilarious in a so-ridiculous-it’s-funny way.

Ironically, it was the latter that formed the original intention, political satire not even figuring in. ‘It started out as a Thunderbirds parody,’ Stone says, explaining the progression, ‘It just grew and grew and eventually we thought ‘why don’t we make it a Bruckheimer action film parody?’

‘Originally it was all about the question ‘what would we like to see puppets do? And it was always trite stuff that wasn’t funny, but watching puppets get murdered or talk about nuclear weapons — that was funny. Watching puppets tell jokes wasn’t.

‘The whole movie changed after the first week of shooting. We had a script we’d worked on for a year and a half and we knew it had to have a seriousness to it. At the end of the day we’re comedy writers, but when we started shooting it, it was because obvious it had to be more serious that we thought.

‘Every day we literally rewrote the script to make it more serious and more dramatic because the little jokes just didn’t work. In fact there’s only two left in the movie — other than that there’s no comedy moments, it’s all played like a Bruckheimer movie. That’s the stuff we liked about it.’

After successfully stopping a meeting of terrorists by destroying half of Paris, Team America get wind of a major terrorist operation, and recruit Broadway star Gary Johnson to pose as a terrorist in order to learn about rumours of another big attack (9/11 times a hundred — ninety one thousand one hundred, as calculated by the brains of the outfit), but after meeting with seeming success — and destroying most of Egypt in the process, the terrorists strike in Panama.

Gary flees, disgraced, and the team suffer both an attack on their home ground and being shot down and captured by the real brains behind the terrorist operations — a priceless interpretation of North Korean dictator Kim Jong Il.

With most of the world and the Film Actors Guild (FAG) against them, can Team America save the day and enact every action film cliche you’ve ever seen?

Parker and Stone would have been shot dead in the old communist regimes for most of their work — from South Park right up to Team America, and for the fact that they live in a country where film distributors care less about parodying politics than making money, we can be glad for celluloid terrorists like them. Team America; World Police is a Weapon of Mass Hysteria.