Skip to content
December 3, 1997 in Nine To Five See more stories from this title 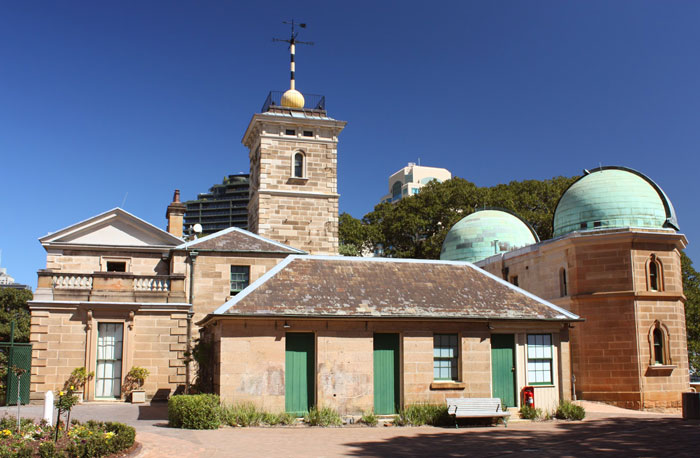 Travel to other worlds at one of Sydney’s most accessible and best-kept secrets, perched on a picturesque hill in The Rocks.

When, in 1796, the first structure was built on Observatory Hill (a windmill, hence it’s original name of Windmill Hill) it would have had one of the new town’s best uninterrupted views of the harbour and surrounding settlements. So much so that in 1803 it was accompanied by a fort to defend against a possible attack on Sydney Harbour by the French.

Nowadays the view is no less awe-inspiring, with the majesty of the Harbour bridge rising alongside, the jewel of the harbour spread below, and at night, the lights of North Sydney and countless boats twinkling on the water.

But nestled where it lies today among the bustle of CBD living, Observatory Hill still exudes a quiet calm, and even surrounded by glass and steel towers and endless traffic, it seems to exist a few steps back in time with its rolling grounds of huge Port Jackson Fig trees and charming sandstone buildings.

The Observatory itself is only part of a small complex of buildings that weave part of the rich tapestry of historical Sydney. The fort also served as a signal station for incoming ships, and the oldest parts of its construction, dating back to 1804, still stand. The rotunda is a charming gazebo just outside the grounds with views across the harbour.

The windmill, which no longer stands, only lasted ten years but gave Millers Point its name, and the Observatory building itself was added to in 1877 to house another telescopic dome and library space. Plus, if you follow the path from the hill back up Kent St, you’ll find the Agar steps and houses, which were carved and constructed in the 1800’s to link the hill with the West Rocks.

It was originally planned for Sydney Observatory to be a simple time-ball tower, where the ball that still sits on top of the observatory building would drop every day at exactly 1.00pm, along with a firing cannon at Dawes Point (and in later times at Fort Denison). But then Governor Sir William Denison, after whom the island prison is named, was keen to replace Sydney’s only real observatory in Parramatta with a new, major government establishment on the new site. So in 1858 a fully functional observatory was opened, with a domed observatory chamber for the equatorial telescope, a longer room for other telescopic equipment, an office and a small residence, all of which still stand today.

Throughout the next 150 years, Sydney Observatory played an important part in Australia’s scientific development, including the Astrographic Catalogue, the first ever worldwide project to catalogue the stars. Among the duties of the Observatory right up to modern times were meteorological and seismographic stations, and it was Sydney’s chief site for providing solar and lunar rising and setting times, tide timetables and earthquake activity.

In 1982, city lights and air pollution became too big a problem and the official duties of the Observatory were shut down. Most of Australia’s astronomical research is now done in country areas through radio astronomy facilities, such as Parkes and Tidbinbilla, and Sydney Observatory is now a museum of astronomy, under the control of the Museum of Applied Arts and Sciences, together with the Powerhouse Museum and the Sydney Mint Museum.

Sydney Observatory runs a basic night tour, which operates six nights a week, and includes a short talk and tour of the buildings, films and a telescopic viewing of the night sky, often a planet, galaxy, star cluster, even a comet.

Hands On Astronomy is an interactive exhibition of astronomy and some basic cosmic laws, and fun, interactive computer software can be used to show the position and motions of the planets, depict the constellations, or even design your own telescope.

Relive history with Sydney’s Eye to the Sky, a display of some of the country’s oldest astronomical equipment, and you’ll appreciate the technology we take for granted in scientific research in the 1990’s.

There’s always something happening in the universe, and the Observatory is there to cover it. In late 1996, special viewings were set up to see Comet Hale Bopp as it approached Earth. A celebration night was held on the autumn equinox, March 21 (when the Sun crosses the plane of Earth’s equator), and an open night will be held on September 17 for the lunar eclipse.

Regular events, particularly during school holidays, include adult and children camp-ins, which run for part of or all night and are spent following planets, constellations or nebulae. As a museum, the observatory is dedicated to education, and both day courses and open nights are popular with school classes for excursions. Workshops are held on everything from astro-photography and telescopes to mini rocket launchers and building a solar barbeque for the kids.

The observatory also runs, together with the Worker’s Education Association, a specially design course, Introductory Astronomy, once a week as an introduction to the field of astronomy.

The Sydney Observatory is still well placed and equipped for amateur astronomy fans. Besides the older 29cm refractor telescope and more modern, computer-guided reflector model, they have several hand-operated telescopes. There’s an atmosphere of discovery among architectural beauty, and a wealth of knowledge to be found in exhibitions, pictures and the friendly and informative staff, who are as eager to talk about astronomy as you are to listen.

The Sydney Observatory is a delight for history or astronomy students as well as tourists. It is part of the successful history that Australia has played in international science and the development of astronomy in our own country. Within its Florentine Renaissance architecture and quaint surroundings are the latest technology in instrumentation gadgets, tracking computers and viewing equipment, placing it at the top of Australia’s amateur viewing facilities. And with major changes planned for the building and new exhibits later in 1998, the Observatory will become more informative and more fun.

For space enthusiasts, a small shop of space paraphernalia is set up on open nights, and in late 1998, the Observatory will have its own full-time gift shop. For diehard amateur astronomers who just can’t wait, the Powerhouse Museum Shop has a range of astronomy products, or Observatory staff can direct you to specialised astronomy shops around Sydney.

And best of all, it’s just a stone’s throw away from anything in the city, halfway between Circular Quay and Darling Harbour, easily within reach by train to Wynyard, bus down Kent Street, ferry from Circular Quay, or on foot.

No admission fee is charged from 2-5pm on weekdays, or from 10am-5pm weekends and public & school holidays.

From 10am-2pm the Observatory is reserved for bookings by schools and students groups.

Night Tours are available every night except Wednesday, and bookings are essential. Admission $6 adults, $3 children/concession, $15 family (consisting of 2 adults and 4 children).

The Observatory is closed on Christmas Day.

The 1997 Sydney Sky Guide is available from the Observatory or the Powerhouse Museum Shop for $12.95.