Skip to content
November 8, 2014 in Cosmos See more stories from this title 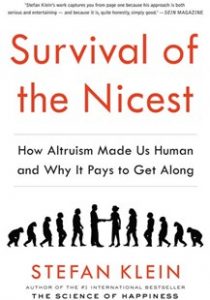 In case you hadn’t noticed, a little war is going on in popular anthropology. Since the advent of the Dawkins era the selfish gene (the title of his seminal 1976 book) has held sway. It’s the idea that we’re all in competition with each other for resources and mates to pass our genes on.

But some writers have recently begun to wonder if Dawkins’ appraisal of evolution is too simplistic. Sex At Dawn by Christopher Ryan and Calcida Jetha in 2010 claimed the human pair bond instinct is a construct of agriculture and private property, suggesting that our ancestors lived in a time of resource and sexual plenty.

Now German analytical philosopher and biophysicist Stefan Klein joins the dissenting chorus, by adding to Sex At Dawn’s conclusion that while our genes are in competition at a cellular level it doesn’t mean the whole organism is: sperm may be at constant war, but people are not. To be fair to Dawkins, The Selfish Gene raised the point, but its success has made the title a sound bite all on its own.

Now Klein expands on the argument that it was our extraordinary capacity for sharing, giving and inclusion that drove our evolutionary success, and Survival of The Nicest makes some eloquent points to support it, investigating both the reasons and the effects of altruism.

Klein refers to the fossil and scientific records – some made by Darwin – as well as modern theories and behavioural science to support the idea that fairness and justice are innate human characteristics.

For example, he explains how game theory proves egocentrics rarely win in (traditional) human society in the long run, how neuroscience shows we receive bigger jolts of reward hormones from solidarity than winning, and much more.

There are even snippets from economics, such as when a researcher found that “if a mere 7 percent of citizens agree … that one can trust most people, it translates into a 1 percent increase in annual economic growth”.

Along with fascinating theories such as altruism’s role in the neurons thought to be responsible for empathy, Survival of the Nicest is a powerful addition to the debate about our essential nature.