Skip to content
July 1, 2006 in Filmink See more stories from this title 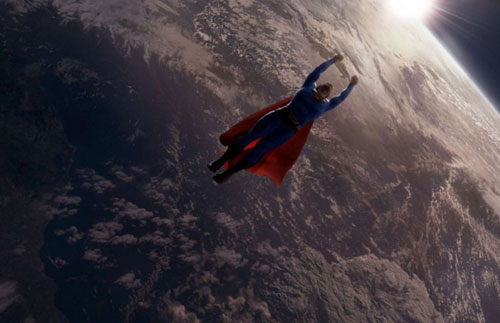 After September 11th, 2001, every comic strip superhero that had inhabited the American (and by extension, world) consciousness for the last 75 years was rendered redundant.

Superheroes protecting the American way were the cultural face of America’s military supremacy throughout the world, and all that power and righteousness couldn’t stop 19 fanatics with Stanley knives.

What’s worse, that same military supremacy that channelled the export of American culture around the world changed into the aggressor, arrogantly bending the rest of the world to its will by force, regardless of international opinion. In just five years America had changed from Luke Skywalker and the rebel alliance to The Galactic Empire, from Superman to Lex Luthor.

The canniest move made by both the studio and X Men director Singer (who jumped ship from Fox’s mutant franchise to direct Superman Returns) is in subtly acknowledging that shift. A major part of the story is summed up by the question ‘is Superman relevant?’ The movie pre-empts us all asking that question by having Lois (Bosworth) winning a Pulitzer prize for an editorial arguing why the world doesn’t need him any more.

But politics has never stood between a studio and it’s hundreds of millions, so we launch into a reverent nod to the 1978 version’s spectacular title sequence (at the time the most expensive titles ever created) together with John Williams’ stirring music before embarking on one of the most entertaining comic strip movies of recent years, and easily the best blockbuster of the US summer film season this year. It’s no accident Singer made X Men the coolest franchise in ages, a fact made more obvious by the relatively bumbling X3 in his absence.

He can’t claim all the credit though. It was destined to be a hit partly because of the anticipation among movie fans of seeing how the filmmaking technology of today would treat one of the world’s most beloved cultural figures. Since first appearing in 1938 Superman’s had a lot of time to gestate in our collective unconscious — three generations have grown up with him. If a comic artist or movie director of today tried to sell a superhero in blue tights and a red cape whose only powers were incredible strength and flight, they’d be laughed out of the development meeting.

Officially coming after 1980’s Superman II in the franchise chronology, it portrays Superman (Routh) returning home after an unexplained five-year absence. He’s actually gone in search of survivors from Krypton and comes back not only disappointed in that quest but finding a world changed. Lois in particular doesn’t seem to need him, having moved on — complete with a new man and a child.

But some things never change and Superman’s beloved human race continues to get itself into trouble in some staggering action set pieces the 1978 effects crew could only dream of.

It’s also up to old nemesis Luthor (Spacey, having more fun with a role than he’s had in years) to try another cockamamie scheme to take over the world, this time using the crystals belonging to Superman himself.

The movie has a lot of heart and a lot of action, making great use of CGI despite dreaming bigger than it needs to at times and looking slightly cartoonish as a result. Routh is no Olivier but channels the spirit of Christopher Reeve as both Kent and Superman and the rest of the cast ably support him.

You couldn’t ask for better effects, better thrills, a more interesting story or better dialogue from an event movie and Singer has established himself as the director of choice in the blockbuster club.

And, along with writers Michael Dougherty and Dan Harris, he asks us all to return to a more innocent time when we could believe in superheroes and religious nutjobs didn’t fly planes into buildings. Sitting down to write her latest editorial, Lois starts with the title ‘Why the World Still Needs Superman’.

It’s an almost plaintive plea from a bygone era, and though she can’t think of a thing to say (perhaps imagining the truth, justice and American Way Iraq has been subjected to for three years), it’s a question we all desperately want to answer’