Skip to content
July 15, 2017 in The Daily Telegraph See more stories from this title 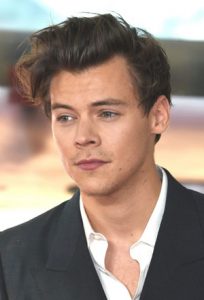 This singer has made a start to his film career, writes Drew Turney.

In his role as British soldier Alex in the blockbuster new film Dunkirk, Harry Styles is immersed in the lives of the men he and his co-stars portray – covered in sand, sea foam, grime, oil, sweat and blood.

But when he sits down to talk to BW Magazine about the role in LA he looks every bit the rock star the world has come to know, with his frilled shirt, cool tatts, rings on every finger and his signature hair swept back in a luxuriant wave.

“If you like movies it’s hard to not want to be involved in it,” Styles says of Christopher Nolan’s latest film about the 1940 evacuation of more than 300,000 Allied soldiers from France as Nazi German forces closed in.

In his Estuary English burr, Styles calls himself a fan of Nolan’s work and Dunkirk a ‘dream job’. He says he found the director ideal because of what he knew Nolan would bring out in his performance.

“There’s not a lot of dialogue, so what made it fun for us was all the silent tension and everything that makes the film what it is,” Styles says. “You got to see that for the first time on the set. You don’t read it on the page, so it was fun to get an idea of what the film might be like.”

The 23-year-old is comfortable and accomplished as a musical performer, as his days in pop sensation One Direction and his solo career have proven, but he relished a different kind of performance.

“I enjoyed not being very experienced, to be honest,” he says. “Going in with nerves could only help because any tension I had personally, I think, would help with the character. But I feel very fortunate to get to do what I love and now I get to do something else I really love, but I don’t think there were that many similarities.”

Styles is also quick to point out he’s not the only newcomer – aside from elder statesmen Kenneth Branagh and Mark Rylance and Nolan regulars Tom Hardy and Cillian Murphy, the cast are almost all unknowns. “I think it was very calculated on Chris’s part,” he says, “putting young guys all in this situation with no experience together.”

But, above all, Styles does realise it’s early days in his acting career and seems to understand film fans might be a different audience from those of his music. Nolan himself tells us later in the day that even though his kids knew who Styles was, the director himself wasn’t familiar with the singer. When asked what other directors he wants to work with Styles goes a bit blank, admitting he hasn’t thought that far ahead.

For now it’s about the experiences he can have as an actor, and to start off your career by standing right where the Dunkirk operation happened must have been something.

“There’s an eeriness to the beach, which I think comes across on screen,” he says. “The first thing you’re shocked by is the size of the area and imagining it filled with men and bodies. It left no room for complaint, everyone was very aware that we weren’t going through what they had. There’s an energy to it that people want to respect.”

With great critical and fan response to his debut solo album, Styles knows he now has the chance to touch a whole new fan base, and he is not taking the job description of film actor lightly.

“When you’re growing up, things you take in around you affect and shape who you are,” he says. “And when you’re watching movies from a young age, they’re an amazing way of working out what you like and how you react to certain things and you learn a little bit about yourself each time. I think movies can change you … finding the thing that speaks to you is a big moment.”

So, even though he might have thought he couldn’t get any higher than One Direction, Harry Styles’s big moment may be yet to come.