Skip to content
December 1, 2007 in Desktop See more stories from this title 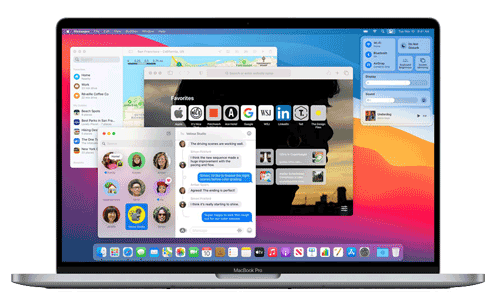 Still making do with second hand, hand-me-down, begged, borrowed or stolen computers, peripherals and software? We all have a picture in our head of our ideal studio if only we had the time/client base/money/space. If you ever get there, Drew Turney has some tips on equipping the studio of your dreams.

Computing in the professional sphere is a funny thing. Our desires are always a few steps above our demands. Interviewed while promoting the film Ratatouille in Australia a few months ago, a Pixar animator described it as a ‘vicious cycle’; “When you improve something it just allows you see more into what you can do,” she said, “so you’re constantly raising the bar on yourself.”

But if there’s a sweet spot most of us would like to reach when it comes to computing power, data wrangling with the best possible software in every creative sphere and support systems, Desktop thinks it might comprise the following…

Is it the fastest pro computer on the planet? Early reviews of the most serious Mac ever have all said the same thing; the dual quad-core Intel Xeon (‘Clovertown’) processors make it an absolute screamer.

Both processors run at 3.0GHz, faster than most other desktop PCs (the high-end Dell Precision 490 has two Xeon processors that run at a mere 2.33 and 2.66GHz respectively) and eight DIMM slots which you can use for up to 16Gb of RAM. What does that mean in practical terms? It’ll make mince meant of even the heaviest possible CAD, motion graphics or special effects processing task.

You can fill it with up to 3 terabytes of hard disk space and have the choice of three of the highest end graphics cards from nVidia or ATI.

In fact, if you’re just doing regular image manipulation or page layout work the 8 core Mac Pro could even be seen as overkill. But you’ll not only be future proofing your studio for a lot longer than many other computer purchases will, the prices of Macs since Apple adopted Intel have come tumbling down, and this will buy you an incredible amount of power for less than the price of the original G5.

Yes, Apple’s cinema displays are great. But even at 30 inches, the biggest of them isn’t king of the mountain.

Samsung’s 460PN is a monster with 40 inches of viewable area. Not to sound too esoteric, but it will profoundly change the way you compute at a fundamental level. How so? Both operating systems and software design are constrained by screen real estate — switching between many applications quickly and seeing your work area under all those palettes is a delicate balance.

It’s not until you have 40 inches to spread everything around that you realise you don’t need to worry about that any more. Even when you set up two monitors there’s an unmistakable psychological barrier, but when your three or four favourite applications and all their associated palettes and windows are spread out before you, you’ll never be satisfied with Command+tab again. As for watching a DVD or reviewing digital footage, the only difference you’ll feel between the 460PN and the local cinema will be the popcorn.

The 460PN is packed with features beyond just a huge number of pixels (1366 x 768 maximum). It swivels to either portrait or landscape orientation easily and comes with a server delivery platform called MagicNet in the box, which transmits files on an existing network.

MagicBright lets you set the optimum picture for either entertainment, text or the Internet, and the response time of 8ms promises a very stable picture for DVDs and streaming video. There’s also a technology called DNIe (Digital Natural Image engine) with ‘spatial and temporal noise reduction’ to promise a crispy picture.

The Blackberry Pearl and the Blackberry 8800 were both popular but slightly limited models. Blackberry took everything that worked about both models and put them together for the 8300.

It’s the smallest and lightest Blackberry with a full QWERTY keyboard weighing in at just over 100 grams, so it’s easy to transport. With so many of us working for ourselves or in very small teams in the design industry, you’re not only the art director or designer but client liaison, business development and CFO as well, which means your clients and suppliers need to be able to get you anywhere. The Blackberry smartphone became synonymous with push email back in the day and it still does a great job of it.

The Curve 8310 strikes the balance between being small enough to use as a phone and large enough to browse files, send SMS or email and use as a PDA.

The popular trackball has evolved from older models onto the 8310, so everything in the system is a snap to locate and use. It’s also a truly international device, with quad based GSM access, which means it will identity and use most phone networks around the world.

Some reviews have quibbled about the lack of 3G, but if you’re spending so long on the road that you need the absolute fastest download speed, maybe it’s time to think about hiring a sales person or gopher.

When Desktop bought our first one-man studio, we duly purchased the page layout Holy Trilogy of Photoshop, Illustrator and Quark Xpress. Looking back, one wonders if Adobe were already deciding to put their two thirds of the Big Three in the one box.

Who (especially poor old Quark) could have guessed a single offering by Adobe could one day comprise your entire software-based design and creative production workflow?

That’s exactly what the Adobe Creative Suite 3 Master Collection is. Between those halcyon days and now, Adobe launched a range of film production tools, bought out their biggest new media rival (Macromedia), unleashed the long-awaited Quark killer (InDesign) and cemented their position at the top.

Containing InDesign, Photoshop, Illustrator, Acrobat, Flash, Dreamweaver, Fireworks, Contribute, After Effects, Premiere, Soundbooth and Encore and stitched together using Bridge and Version Cue, you can buy stock photos, preview mobile content and manage client feedback all from within the suite. That means in theory you never need leave Adobe’s warm embrace while you produce finished work ready to deploy in print and online design, digital video and more.

It’s pricey, but far cheaper than buying a host of software solutions from all quarters that won’t work together half as seamlessly. Even if you don’t employ the in-built workflow management, there’s so much standardisation and so many new, improved and expanded features it could be described as the second most important purchase for your studio of dreams.

There’s a slew of digital footage editing software around now — it seems every digital camera or music player you buy comes with a suite of media management programs to let you make everything from instant chat icons to cute home movies.

In that software niche, Avid is like a Ferrari in a car park full of rusty runabouts. It was the first full-featured NL (non-linear) video-editing suite around, and though Apple’s worthy adversary in Final Cut Pro has made inroads into the higher end of the industry, the vast majority of editors will tell you Avid is where it’s at.

Why do you want video editing software in your studio of dreams? Simply because it’s an area long closed off to the average small studio or sole trader. Anyone can buy a Mac and call themselves a print designer. Buying a film editing solution and calling yourself a video production house is a far more skills-heavy and expensive proposition, and you’re too used to watching a small few TVC production companies get all the action while you just do the client’s business cards.

Now that self-taught video editing is in everyone’s hands, as a full service agency you’re ready to move into the upper ranks.

Media Composer is Avid’s industrial-strength video editor, with all the standard features and formats that have formed the accepted skill-set across the industry and which other software can only adopt. It also continues with each version to include groundbreaking features you’ll never know how you did without. As an example, the latest has phonetic speech identity right in the software, which means you don’t need a script editor or assistant to go right through the edit to find something, the software will actually search the soundtrack.

If money’s absolutely no object, around $50,000 will buy you a full Avid Media Composer Adrenaline system, which includes the software, Adrenaline I/O processing hardware and workstations.

The intriguingly shaped Maxtor OneTouch 4 Plus is available in 250, 500, 750Gb or 1Tb model and its brushed steel profile will look right at home next to your Mac Pro.

The 1Tb model will be enough for short-term backup for the average design or production business. It’s not an offsite solution so it can be used to hold immediately archived stuff and clear your working hard drive space for the next edition, film or project, committing the archive to tape or other media for storage offsite on a regular basis.

It can be connected to your computer via firewire or USB, which gets a file transfer rate of between 30-45Mbps.

The automatic backup software is Windows only so the first thing you’ll want to do if you’re a Mac user is wipe it clean and instigate your own backup plan, but the OneTouch will look cool doing it.

Everything in your studio of dreams so far has been made with one purpose in mind; keeping you sitting at your desk. In today’s time-poor, high-pressure economic environment there’s no mercy for those who want to sacrifice work hours for the sake of their fitness. So if trips to the gym are out of the question, bring the gym to you with this stylish, discreet exerciser.

Called acceleration training, the pedestal vibrates in such a way as to stimulate your body’s natural response to vibration with improved blood circulation, muscle tone and flexibility and bone mineral density.

It all sounds complicated until you realise you need only hop on for three 15-minute sessions a week for it to have an impact on your health by loading the human frame with the maximum amount of movement with the minimum amount of impact stress produced by running or traditional training.

Yes, you’d expect Apple’s ubiquitous mp3 player to top list of any story about the best in technology, and if you really need your entire music collection on one device it’s great. But The U3 makes a great alternative because as a busy designer, producer or creative pro you’re unlikely to spend countless hours jogging, ironing or anything else that takes you away from your computer — which will have most of your music on the hard drive anyway.

Because one should keep in mind the iPod is a no-frills digital mp3 player and little else. There’s no radio or voice recorder (for example) unless you hand over more cash for one of the many accessories. For a device the size of a flash drive, the 2Gb U3 has all that and more, as well as a very clean, attractive profile and interface and best of all it’s cable free. Just extend the USB connector from the body and plug it straight in to transfer music.

We don’t all have a digital camera, multifunction centre, music player, mobile phone and the host of other accessories to fill up all the empty USB ports that come with most new computer systems.

Enter the USB toy makers, and one of their grooviest ideas is the USB Lava Lamp. The power from the port warms the oil inside the six-inch tall device, sending the glitter swirling. It’s available in lime or pastel blue, so keep the unspoken retro creed of the designer alive today. A fondue set and indoor bar of panelled wood and exposed brick powered by USB can’t be too far behind.