Skip to content
August 1, 2002 in APC See more stories from this title 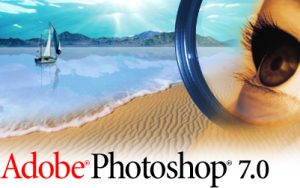 Adobe retains core functionality and delivers not only a plethora of new features from the invaluable to the frivolous, but a better performing product.

Unless you’re talking film editing or high-end 3D rendering, computer software doesn’t come as RAM hungry as Photoshop. On a brand new G4 or Pentium III it was like lightning, but on the original Pentiums and Power Macs plenty of us are still saddled with, it was fraught with twitchy, irritating delays. Its appetite for memory became more and more apparent as designers, photographers and multimedia developers the world over upgraded from version 5.5 to 6.

The other pleasant surprise is that Photoshop’s nuts and bolts haven’t changed. All the new features are built into usage patterns you’ll already know. If you’re confident using version 6, Photoshop 7 won’t be alien territory, it’s the same only better.

The new functions in Photoshop 6 were a pretty big step up from 5.5. Packed with so many great new features just recently in version 6, many users will wonder why Adobe bothered updating such great software so soon — Photoshop’s core workings have been left intact. Version 7’s release seems to be mostly to take advantage of Mac OS X — the market’s most functionally fluid operating system, which Adobe no doubt wants to be associated with.

But Photoshop 7 is no rush job. Some of the features are merely cool, but some are the kind that makes you wonder why they weren’t there all along. Despite making noise about things like the healing tool and painting engine, Adobe has included a multitude of additions you won’t notice straight away but will make your life a little easier.

One is the new preset document sizes. Instead of having to set image dimensions in the New dialogue box, you can select from two dozen commonly used document or screen sizes with the appropriate aspect ratios (even including the video standards PAL and NTSC).

And besides pre-empting users’ wishes, Adobe’s strength also seems to be listening to the street talk about its products — and reacting to it. An example is the thankful return of being able to double click on a layer to rename it — a jarring change in version 6.

Part of Mac OS X’s promise was the end of searching through hierarchies of files in the finder (desktop) — now the finder itself is an application that you can use to access and manipulate in a single window, and Photoshop is adopting the same philosophy with the File browser.

Accessed from the options bar, it consists of a hierarchical list, thumbnail display, preview and file metadata (date created, size, etc) where you can do anything from navigate, open, rename, move or delete files without having to leave Photoshop. It’s a good idea, but if you’re used to engaging the operating system to organise files you’ll question the point.

In fact, for every indispensable change, there’s an equally trivial one. Some new tasks are adequately (or better) performed by other software most Photoshop users already know. While live vector text in version 6 was a godsend, most of us won’t be typing enough directly into Photoshop to warrant using the new spellchecker. Aside from the odd few words, text is more likely to be pasted from somewhere it should already have been finalised (or applied in a page layout application).

Similarly, the new Painting Engine — which lets you create art brushes (even out of images) — is nice, but most graphic artists already use Illustrator to create brushstrokes, and have been for the last couple of versions.

Other new features, although handy, seem geared towards increasingly narrow sectors of the market, as if Adobe is trying to cram every possible need into one program (at which it’s succeeding). The much touted healing tool is great at its promoted use (removing blemishes in your image — or its subject — while retaining original shades and hues) but will only be useful in high-end retouching.

But nor are all the changes visual bells and whistles. Again sticking to the Mac OS philosophy, multiple users can create profiles of their preferences (called ‘workspaces’), and there have been some major boosts to batch processing (including the ability to create ready-to-upload picture galleries complete with HTML pages automatically — formerly Dreamweaver’s domain).

Multimedia capabilities have been left virtually alone, and with good reason — Photoshop 6’s near-perfect Web preparation functions have left version 7 with little room for improvement. Imageready 2 (again part of the bundle) now includes a rollovers palette that displays all the rollovers, image maps, slices and animations together, but most functions — like Save for Web — are the same.

So except for some fringe professions in the industry, Photoshop’s features didn’t need updating — more a testimony to the foresight put into Version 6 than any shortcomings of Version 7.

Native Mac OS X compatibility looks fantastic, but there are two simple reasons for everyone to upgrade to Photoshop 7 — it’s fast and it’s smooth.