Skip to content
March 7, 2011 in Fast Thinking See more stories from this title 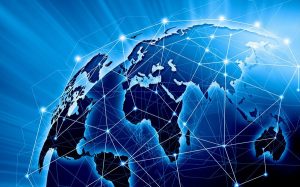 We can access videos of cats flushing toilets, but we can’t but a pair of shoes from overseas because of trade restrictions. Is this the brave new world of borderless connectivity the web promised? Drew Turney investigates.

34-year-old web developer Adam Braimbridge cultivates eclectic tastes in movies, music and clothes. He didn’t expect to find a pair of shoes on eBay of a size he couldn’t get at home, but when he did he expected the process to be as smooth as any other online purchase he’d ever made.

So he was surprised to be greeted with a page that said the store selling the shoes couldn’t ship them to Australia for ‘trade reasons’. “I can’t even buy shoes on eBay,” Braimbridge says. “We thought the internet would break down all these borders but the opposite’s starting to happen.”

The buzzwords we always hear about the web breaking down barriers are almost evangelical — ‘borderless’, ‘connectivity’, ‘democratisation’. Twitterers from Burma warn us all abut a brutal crackdown. Political activist blogs are eroding the power base of the clerics who rule Iran. Filmmakers, musicians, authors and everyone with an opinion has access to the same global audience rich media conglomerates used to have to themselves.

Because of the multinational nature of modern business (and the web helping to enable it), we sometimes think national borders are a thing of the past. As the world reframes itself into trading blocs and dismantles old restrictions between countries (to the extent of sharing common currencies in the case of the EU) we forget there’s a much stronger force than the Internet when it comes to consumer goods — territorial rights licensing supported and protected by companies and lawyers with very deep pockets.

“We’ve had a long road getting rights in the US and the experience outside the country has been even tougher,” says Tim Westergren. As founder of Pandora Radio, Westergren should have had it easy — Pandora.com is a service where playlists of music generated by users intelligently suggests tracks they might like based on their preferences. With purely digital media and nothing to physically ship, Pandora Radio is the sort of entity the web was invented for.

But there’s much more to playing copyright music over the web. “There’s only one reason why Pandora isn’t streaming in other countries and that’s because the licensing rules are either not existent or unaffordable,” Westergren says. If you visit Pandora.com from outside the US (the only territory Pandora Radio has rights agreements), you’re met with an official company letter explaining that you can’t use it. To enable Pandora globally Westergren has to seek out, contact, negotiate with and pay copyright holders for every track the service plays in every country users can access it.

Ironically, the old technology of broadcast radio has it easy by comparison, the industry maintaining what Westergren calls ‘one stop shops’ for licenses and making the rights aspect of the business straightforward. The infrastructure then paves the way for music to be made available across the world all at once.

But it’s a very different beast when it comes to online radio (webcasting). “There’s no centralised form of licensing in most places, so you have to go artist by artist, label by label or rightsholder by rightsholder to get permission. It’s just not feasible,” Westergren says.

To make things more difficult, copyright holders seem just as happy to slug broadcasters with whatever fees they wish to extract, and many detractors see it as a refusal to look at the longer view of getting their music in front of more people using very cheap technology.

“When we started, the royalty rate was actually in the middle of an arbitration process,” Westergren remembers. “Then the ruling hit and it immediately made the situation very dire for us.” The ruling was a 2007 recommendation from the US Copyright Royalty Board that effectively doubled the amount web-based broadcasters had to pay artists and copyright holders while the fees for broadcast radio stayed the same. By 2008, Westergren was telling The Washington Post Pandora might have to shut its doors, facing royalty fees that amounted to 70 percent of its revenue. It’s taken two years for Pandora to lobby and renegotiate and the business described as the ‘giant’ of webcasting has managed to stay in business.

Though we’re left in the curious state of an industry-leading website only being accessible from a single country, such geography-specific restrictions of digital content aren’t new. While the web itself has contributed to the decline of DVD regions, we’ve all contended with DVDs from overseas with unique extra features that refused to play at home, and the practice still exists in places you might not expect it.

Dedicated gamer Graham Haynes had been staying in the UK for an extended period and when he bought his Xbox 360 console back home to Australia, he found it wouldn’t give him access to his UK-based Xbox Live account. “I couldn’t use my UK account in Australia so I had to start a fresh one over here and lose all my online game progress,” he says.

End of the Wild West

Restrictions like those above might make business sense, but consumers of internet services must find the constant apologies for content not available in their region a backwards step to say the least. Clips from movies and other media used to leach out across the web with the speed of a thousand clicks. Now, warnings that copyrighted content have been taken down spring up almost as fast as bloggers can pass it around.

When we called the web the ‘information superhighway’, we didn’t envision a host of corporate stop signs. Websites didn’t track and collect information on you to the extent that your browser told every site you visited where you were situated among the global audience. Why has the law caught up with media content online in this way only now, fifteen years on? The answer might become clear through figures from the US Census Bureau, which reports that ‘retail e-sales increased at an average annual growth rate of 21.0 percent, compared with 4.0 percent for total retail sales’ (for the record, they’re talking about almost $142 billion in 2008 alone).

It’s not quite the same in Australia. As telecommunications and online industry reporter Paul Budde’s website says; ‘Australia is several years behind the US and UK and Australian consumers are voting with their wallets when it comes to shopping online’, but the trends are clear.

There’s a burgeoning market of products (often in digital form) for far-flung copyright holders to police, and we’ve already seen deep-pocketed industry lobby groups such as the Australian Recording Industry Association and Recording Industry Association of America in action against Kazaa and Napster. The message to those who think they can tiptoe around territory licensing is clear — toe the line or you’re next.

And despite our global reputation as early adopters or our developed society and stable government, Australia just might not be that good a proposition for online services. After all, there are only 20 million of us. “We’re not a big market,” says Geraldine Farrell, an IP expert with Griffith Hack Patent and IP Attorneys.

“They’re going to go after the market that will make money for them. They might figure it’s too hard to do or just restrict themselves to the legal areas they’re familiar with. Often that’s the US, where they know exactly what their rights and obligations are and they can readily identify all the copyright owners and enter into appropriate license agreements with them.” (For the record, Tim Westergren said they were in fruitful discussions with Australian copyright holders and things look positive for Pandora’s future here).

Maybe that makes sense for an online radio station. If they play your song in 100 countries, you might think it’s fair to be paid 100 times (or receive micropayments for all the millions of times your song is played by various users when it suits them). But shoes? “Suppliers or owners of trademarks can have exclusive distribution arrangements in place in different countries,” Geraldine Farrell says. “So they won’t be able to ship genuine goods into the Australian territory because somebody else might already have the rights to be distributing here.”

If that sounds familiar, it was the basis for the debate that raged in late 2009 over the parallel importation of books. Under the current scheme (which the government opted to keep, much to the relief of the publishing industry and the disgust of large book retailers), no importer can sell a foreign-produced copy of a book for a fixed period, giving the advantage to the Australian publisher to produce, market and sell it and be assured of the revenue.

If parallel importation restrictions were swept aside, a nimble, astute provider overseas could sell a product directly into Australia faster and cheaper than the appointed Australian distributor or licensee. Though it sounds great for customers, you might not agree if you’d spent considerable money on a storefront, franchise fees and a marketing presence to resell a premium brand and then people started buying it on Amazon for half as much.

Of course, accusations that global brands gouge customers have always been part of the landscape. For years Australian consumers lamented paying around $30 for a CD while US purchasers paid closer to $20. Apple is frequently the subject of region discrimination rants, with the price of a Macintosh or iPod frequently cheaper in the US, even accounting for overseas shipping and favourable exchange rates.

Though shipping costs, lower volume and high marketing costs of running a company from the US but selling into Australia can affect the price of a product, it appears the main reason behind goods pricing in a given market is set because they can. While covering the opening of Sydney’s Apple Store in 2008, The Sydney Morning Herald asked retail head Ron Johnson about the disparity between Australia and US pricing. Despite near-equal exchange value throughout the year, Johnson merely called Apple’s prices ‘really fair’ and ‘within reach of most people’.

How will borderless commerce survive and thrive?