Skip to content
February 11, 2012 in The West Australian See more stories from this title 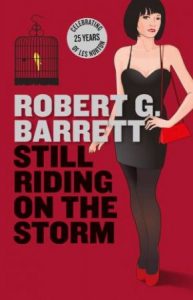 If you know the writing of Robert G Barrett, you wouldn’t have him pegged as an activist or political agitator. After spending a couple of years out of the limelight, Barrett is known for creating a character you can’t help wondering is somewhat autobiographical – Les Norton.

The larrikin, fighter, drinker, lover and bouncer at the legendary (and fictitious) Kelly Club in Sydney’s Kings Cross has generated a dedicated fanbase across more than 20 books. Barrett says as many women read his books as men and curiously, he has more readers per capita in WA than anywhere else.

Norton’s adventures (and Barrett’s writing) are honest, raw, straight from the hip and mostly concern the primary interests of most Aussie blokes – drinking, sport and sex. Like James Bond in thongs and stubbies, Norton can swing a punch that’s knocked down many a shady Kings Cross character, knows the difference between right and wrong and has been of ‘service’ to many members of the opposite sex in their pursuit of amorous affection.

So it’s surprising to find Barrett is circumspect both in writing and over the phone where he now lives in on the NSW Central Coast. His latest book Still Riding on the Storm is a collection of short stories, magazine columns and personal essays from the last few years that outline the concerns of a very different man than the former butcher and – in his own words – ‘waxhead’ youth. Despite the euphemisms, rhyming slang and knockabout speech of most men of Barrett’s age and background, he’s also ready to put the boot in where he thinks it’s warranted.

One common target is the Australian literary establishment, which Barrett thinks rewards its own while politically incorrect writers like himself have to fend for themselves. As a piece late in Still Riding The Storm called So, You Want to Be a Writer?, begins; ‘So there I was, sitting outside my humble digs at Terrigal, listening to my stomach rumbling and wondering why, even though I was an established Australian author with three bestsellers out that had sold 10,000 copies in Europe and had written feature articles for some of the best magazines in Australia, I was back on the dole and still driving a $400 car from the wreckers…’

Does the man who then went on to write ‘the literary scene in Australia is one great big wank?’ feel the same today? “Oh s___t yeah,” he begins. “They just go in there and put their hand out and it’s all nice and lovie dovey. Some bow tie down in Canberra will give them $100,000 or $50,000 [Barrett calls the Arts Council the ‘literary dole office’]. A lot of Australian writers are really into themselves.”

But Barrett’s scorn isn’t restricted to authors. When it comes to publishers he’s just as scathing. “They’ll rob you blind and use you up and they’ve got egos bigger than the left tit on the Statue of Liberty. I’m convinced if you took a sandwich into some publishers’ offices they’d take the filling, scrape off the butter and leave you with the dry bread,” he says.

Barrett’s bank balance is in much better shape today, he tells us, and vindication of his career accomplishments is also coming in the shape of a Les Norton TV project that’s in planning at the moment. But in 2008 a new problem struck from within, when he was diagnosed with what he refers to as the ‘Bengal Lancer’. The surgery to remove it began a nightmarish tale of the limitations, bureaucracy and outright incompetence of our medical system. Each procedure led to a new infection or problem that required more uncomfortable treatment. One seemingly uncaring doctor after another subjected Barrett to endless rounds of painful surgery that often did him more damage down the track.

Barrett received advice about an unorthodox treatment he says has put him and several friends in the same situation in remission – tinned asparagus – and when The West talks to him he’s on the mend. “I’m still getting over it,” he says, “I’m still not 100 percent compared to what I was but I’ve put weight on and got my appetite back and I’m training a bit. But I tell you what – there’s always someone worse than you.”

In perhaps the most personal and serious piece of writing he’s done, Barrett chronicled his battle with cancer in a story called Bowling for Bukowski, referring to the closest thing he has to a literary hero, Charles Bukowski. “Put simply, his honesty,” is how Barrett describes what he likes about the American hellraiser. “He’s not out to impress you or the critics. He’s not writing to garner literary accolades or grants. He just writes about what he sees around him and spices it up.”

Like the rest of Still Riding on the Storm, Bowling For Bukowski is done in Barrett’s fun-loving and blokey style, in the style of a larrikin character we’re fast losing from Australian culture – no matter how serious the subject matter it’s full of dirty jokes, fun poked at himself and the sort of vocabulary Les Norton might wield in real life. Like his on-paper alter ego, it seems there’s plenty of spark in Robert G Barrett yet.