Skip to content
June 22, 2016 in Moviehole See more stories from this title 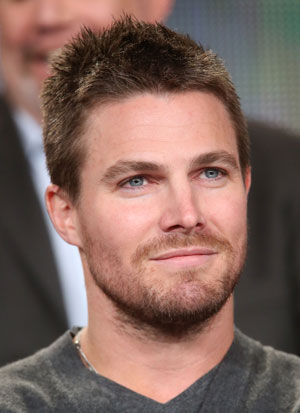 If you’re a comic book movie fan there’s every chance you know who Stephen Amell is. The iron-jawed Canadian had done some TV before landing one of the first small screen superhero roles and – to many – among the best, that of Oliver Queen/Green Arrow in Arrow.

He’s joining an ever-expanding TV comic book universe thanks to crossovers with The Flash and the Legends of Tomorrow TV series, but we’ll next see him fill some very big shoes as the sports-loving New York vigilante Casey Jones, romantic foil to April O’Neill (Megan Fox) and bro to the Teenage Mutant Ninja Turtles.

The 35 year old spoke to Moviehole.net in Los Angeles about what TV has over movies (and vice versa), the range of fighting styles he’s employed as an actor and why nothing will ever top those rubber animatronic Turtle suits from the early 90s.

How does the rough and tumble of working on Arrow prepare you for the role of Casey Jones, if at all?

People always ask me with Arrow, ‘What kind of martial arts do you do?’ My answer is always I’m skilled at the martial art of fighting on screen, because if you are throwing a punch on screen, I now understand ‘Okay, if the camera’s over here, I have to come wide with the punch and come across. If the camera’s over there, I have to go deep with the punch.’

Turtles actually reminded me a lot of the pilot of Arrow insofar as on the pilot of Arrow, I had six weeks to learn fights that were in the pilot, so by the time we actually got around to shooting them I was really versed. Now once we get into episodic work on Arrow, I get less prep time where I have to learn stuff on the day.

With Turtles, I was in New York and I was there for about a week and a half before we started filming and I immediately got in there with the stunt team out of the Armory in Brooklyn. We just started learning all the fights. There were three, possibly four fights that Casey has, the first one being I go up against the Foot Clan, three or four guys where I rescue April.

We showed that clip at Wondercon, which is the first time that I’ve actually seen it. I’m fighting four guys at once and I’m using the hockey stick, so I was happy that I could be prepared and do so much of that fight. I think I did all of it actually, but he’s definitely more of a brawler, so you sort of had to unlearn some stuff. One complaint that I always have is if everything looks too polished then it just looks like nobody is doing it.

Do you have to scale the fighting style up because it’s a movie and on a bigger screen?

I wouldn’t say you have to scale it up or down. I’d say that the biggest thing that you get on film is time, all the time that you want. The toughest, not physically but maybe mentally for me, was the first couple of weeks of filming, I think the first three weeks were nights.

When we’re filming this first fight with April and Casey and the Foot Clan and then eventually the Turtles, we’d shoot as much of it as we could and then the sun would come up and they’d be like, “All right. See you tomorrow.” You just have the time. I actually thought that with a feature film, I imagined seven cameras operating and almost a little bit less freedom, but when it actually came down to it the majority of the film is shot on a camera with a steady-cam, just one camera.

How is TV different?

I’m used to TV, which is like four cameras, set it up and let’s go, let’s go, let’s go. Then, of course, we also had the opportunity for my final fight scene in the movie. They actually farmed me out to a second unit done by the stunt team that does a lot of car chase sequences for Fast & Furious, it was just coming off of Captain America. It was just me and two stunt men playing other characters. It was just us at Pier 92 in Manhattan in blazing temperatures. Just five days non-stop. Like boot camp.

Did you and [director] Dave Green talk about what you made you the right choice for Casey?

No. Dave Green and I had a meeting in New York, I want to say in January. I was in town to do Seth Meyers and sat down for a meeting with the director of Turtles, not actually about Casey Jones but just about the fact they were setting up Turtles. My wife was actually the one that sniffed out that it was going to be about Casey Jones and that character because she was such a big fan growing up.

I actually didn’t talk to Dave a lot through the audition process. I put a tape together for at Andrew Platinum Dunes. It made its way through Paramount to Michael Bay, and next thing I knew I was in LA on the lot doing a camera read with Megan. That Monday I believe, I got called from my agent and manager, which is always a good sign when you get a dual call, saying to expect Mr Bay’s phone call.

Then I got it, but Dave and I had a nice rapport on set. He wanted to make sure Casey was a little… zany is the wrong word, but there was constantly a little bit of a ‘Casey has a bit of a screw loose’ type thing, and he always pushed me in that direction, which I enjoyed.

Back when Arrow began it was a bit of a novelty to have a live-action superhero on TV. Now it seems like they announce another one every week. How do you stay fresh and keep ahead of the curve?

When we designed Arrow, it was designed to be … I wouldn’t say a reaction to the style and tone of Smallville, but it kind of was. The Green Lantern had just come out and that was very bright, and we wanted something that was not. Of course, we had to deviate a little bit because after the success of our first season we were offered the opportunity to have The Flash property. Of course, if you’re going to introduce the Flash, you have to introduce a variety of other things.

Now Flash is around and Legends is around and Daredevil is on Netflix, although I don’t really feel is a valid comparison because comparing Netflix to basic network shows is kind of weird. They have 10 episodes and they can show nudity and blood and all that stuff. I’ve actually spoken a lot with our producers about not really worrying about these other shows, and maybe focusing and getting back to what Arrow does well, because I think that there are things that we do better than anyone else on TV, from a grounded, combat perspective. I want to get back a little bit more in that direction.

Do you remember the first live action Turtles films from he early 90s?

Do I ever. They hit me I think in 3rd, 4th and 5th grade. I’ve actually met a couple of the guys who were in the turtle suits, and they have horror stories about a number of times where they accidentally kicked each other in the head because they couldn’t see out of them.

Those movies hit me at a really cool time. I remember that first movie and I remember just being dumbfounded as a kid. I’d seen the cartoon. How are they going to pull this off? I remember the Vanilla Ice Ninja Rap from the second movie. I think I saw all three movies in the theater and then went back to friends’ places and had pizza parties. That’s what you did.

Do you keep Elias Koteas’ performance in mind? Surpass it?

I think it’s totally different. Purposefully, when I booked it, I went back and I watched one of the live action ones. I actually watched the second one, the Secret of the Ooze, because Casey Jones wasn’t in that one. He was in the first and the third one. I actually purposefully avoided it. I didn’t remember it, so I didn’t want to feel like I was doing any type of imitation at all.

The other thing is that it’s not an unfamiliar territory. Justin Harley played Green Arrow in Smallville and that was a very recent incarnation of a big character in that show. I didn’t watch a single second of it before I did it.

How do you respond to critics who say the CGI will never have the charm of the robber suits?

I haven’t really had to deal with any of the criticism because I wasn’t involved in the first movie. I know that in this one, there was a lot of thought given to the character. While these are CGI characters we do need to make them as approachable as possible.

I know that the look and the feel of the Turtles in Out of the Shadows compared to the original is a little warmer, brighter, friendlier. I think they’re less menacing than they were in the first one. Hopefully that lends some of the same sort of warm and fuzzy feelings that the originals did. Nothing is ever going to top those rubber suits, but I’ve seen some of the finished versions.