Skip to content
March 3, 2007 in The Sydney Morning Herald See more stories from this title 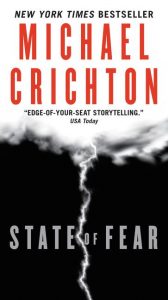 Not just any old bad novel but the worst kind — a bad novel by a great author. Yes, Crichton’s an airport thriller writer, but he can spin an accessible tale around a solid idea with good characters as well as King or Rowling.

In this case, he forgot the tale and characters. The premise — a plea for reason in the politically hysterical global warming debate — is sound, but the execution is like zooming past an interesting landscape too fast to see it. Colourless caricatures rather than characters drift arbitrarily through the plot, giving you no indication who matters. Clumsily written action sequences could have come from a primary schooler. Humour is elbowed in where there’s no place for it, sobriety where it’s supposed to be an adventure.

Where Crichton’s high-concept novels like The Andromeda Strain and Jurassic Park leave distinctive marks on both our psyche and culture for years after release, you’d be hard pressed to even recollect State of Fear’s plot 12 months later.

The afterword makes Crichton’s purpose of attacking the hypocrisy of the environmental movement clear. He should have posted it on his website, ditched the contrived fiction and saved 700 pages of perfectly good paper.