Skip to content
December 5, 2012 in MSN See more stories from this title 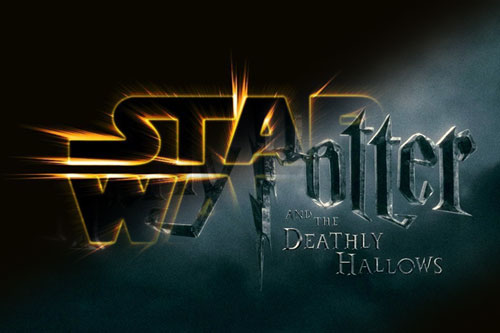 Pop quiz. What sci-fi/fantasy/adventure franchise has taken billions at the box office, inspired a generation and features a timeless story of good versus evil in a fantastical world full of bizarre creatures and magical powers, getting progressively darker in subsequent films?

Just look at the arcs, from the narrative beats to the motifs and talismans in each story. Now, we’re not suggesting the inimitable J K Rowling purposely ripped off the saga in a galaxy far, far away. George Lucas was just as up front admitting he used archetypes from a million fixtures across the pop culture continuum, from the Black Bart figure in cowboy serials of the 1950s to Joseph Campbell’s Hero of a Thousand Faces. He’s even supposedly borrowed the Luke/Han/Leia relationship from an Akira Kurosawa film.

So if anything, the bare bones of this timeless story can be found in both franchises because it’s destined to be repeated as long as Hogwarts and the Jedi order endure. Maybe you think the dark lord is in the details and Harry Potter and Star Wars are actually quite different. But as the following list clearly shows, the similarities are staggering. The only thing that’s changed is that now they use GCI instead of puppets.

Meanwhile, such classic tropes will outlive us all. Maybe in 2023 a bunch of Gen-Yers will take their kids to see the latest CGI action adventure blockbuster and snort derisively to each other ‘this is just Harry bloody Potter all over again’.

A young boy lives a dead end life in a boring wasteland (Tatooine/suburban London), wondering how he’ll ever escape. But he has a family heritage that’s richer than he could ever imagine, one he’s destined to take his place in one day. (Luke Skywalker/Harry Potter)

The hero’s plight comes complete with an adoptive family – in particular an uncle – who knows the boy might play a pivotal part and wants none of it, but the war brewing will make him pay for his lack of vision. (Owen Lars/Vernon Dursley)

The hero needs a call to action, a message from the world he’s destined to join. It might be an owl delivering a letter to a bedroom window or a jammed recording in a cute droid’s rusty innards, but he sits up and takes notice. (R2-D2/Hedwig)

When he finds his way to his rightful place, the hero finds a loving, benevolent father figure (with a beard) who will show him a magical world of special powers and help him wield them to become the warrior he was meant to be. (Ben Kenobi/Professor Dumbledore)

Just when it seems things couldn’t be going better, the elderly mentor will fall victim to the dark forces at work, leaving the hero alone and scared in the universe and making him step up and become the man of the house.

The bat-like villain’s chronic respiratory condition isn’t the only thing that makes him mean. Of course he wears black, and while he used to be human, he’s quite beyond that now. He has powers of clairvoyance and suggestion, and watch out for the death-grip. (Darth Vader/Voldemort)

Even worse that having a despotic enemy villain to contend with, the hero is going to discover he’s more inextricably linked to him than he imagined. If it’s not his soul being one of the horcruxes, it’s the fact that the dictator running the galaxy is his dad.

Two indispensible friends will accompany the hero on his journey – a ballsy, take-charge girl whose beauty and compassion win everybody over and a cocky, lovable clown. They’ll bicker endlessly, but only because they crushing on each other. (Han and Leia/Ron and Hermoine)

He’s tall, lovable, cuddly, hairy, speaks a strange language and makes us laugh. But he’d give you the shaggy pelt off his back if you needed it, and when the chips are down he’ll use his unique powers to save the day. (Chewbacca/Hagrid)

The elite can twist it into amazing shapes and forms, but when good and evil use it to clash, an unstoppable force is going to meet an immovable object… in different colours. (Harry and Voldemort’s wand lighting, Yoda and the Emperor’s force lightning)

Between the small, cute Ewoks and the goblins that keep accounts in the magical world to the huge, reptilian and murderous Basilisk in the Chamber of Secrets and the Rancor in the basement of Jabba’s palace, there’s a host of creatures great and small.

Every Dark Lord needs an army to hunt and kill at his merest whim. Created to strike terror but kind of easy to defeat one at a time, the only difference between the Dementors and Imperial Storm troopers is the colour of the uniform.

A large part of learning to use magic is lifting and moving objects without touching them. It comes in handy for lifting feathers in the classroom or crashed fighters out of the swamp, the only difference being Yoda doesn’t have to say ‘Wingardium Leviosa’.

When it seems like he’s helping he’s really selling you out to the Empire, and when it looks like he’ll turn you into a frog it turns out he’s been taking care of you all your life because he was in love with your mother. (Lando Calrissian/Professor Snape)

At first the characters of Yoda and Dobby (wise old sage, simpering ex-slave) couldn’t be more different, but take a close look. It’s all in the award-winning voice talent, the stature and the pointy ears. And (spoilers!) they both have the saddest deaths.