Skip to content
November 7, 2019 in Variety See more stories from this title 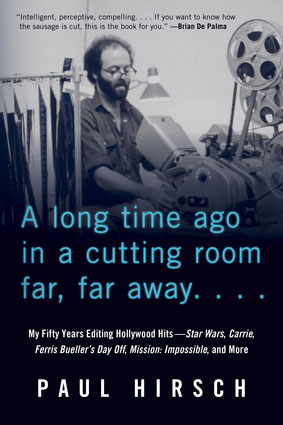 Filmgoers don’t know the name Paul Hirsch nearly as well as those of Brian De Palma, George Lucas or John Hughes, but after a five-decade career as a film editor, he’s been an integral part of some of the biggest movies ever.

Hirsch says editing is a creative art despite the mechanical specialization of the pre-digital days, and his new book A Long Time Ago in a Cutting Room Far, Far Away Chicago Review Press) makes a powerful case for the influence an editor can have over the creative direction of a film.

The book’s opening paragraph tells a story about how the decision to switch a wide shot to a close-up of the star in one of his early movies (De Palma’s Obsession) convinced Columbia Pictures to pick up and distribute the film. “Context is everything,” writes Hirsch, who along with Marsha Lucas and Richard Chew won the editing Oscar in 1978 for the original Star Wars. “You can take the most affecting moment of a four-hankie movie and cut it into the middle of a broad comedy, and it will seem absurd.”