Skip to content
January 25, 2003 in Filmink See more stories from this title 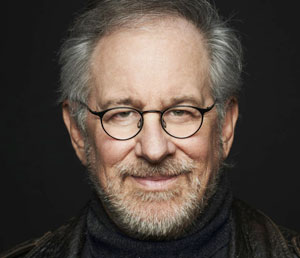 After a quarter of a century at the top of the movie making game, Steven Spielberg has finally let his secret slip — he has a twin brother.

He obviously didn’t get his imagination from his parents — they named his twin brother Steven as well. This twin also wears a baseball cap on set and has a beard (he appeared without it just once; in the video clip for Cyndi Lauper’s Goonies R Good Enough).

This twin didn’t hang around Paramount’s gatehouse in the 1970s like our Steven did — getting to know the guard until he started walking in unchallenged (so many people knew him by then they thought he must belong there).

And he’s not very good at picking scripts — he has none of his brother’s innate sense of material that will not only resonate with audiences but make truckloads of money.

Because the Steven Spielberg we know has been responsible for project after project that’s revolutionised not just the way we look at movies but the way movies are made.

For the studio system, he reinvented Hollywood. Jaws was the Hollywood movie industry’s September 11 — it changed everything. Movie marketing can be described as pre- or post Jaws.

Before that fateful July weekend in 1975, movies were broadly targeted as rolling investments that gradually made back their money while auter directors like Scorsese and Altman ran Hollywood.

Post Jaws, returns are measured (and sometimes written off) after the opening weekend. License agreements with Pizza Hut and Toys R Us are set in stone during pre production. Lawyers and accountants moved in with their MBAs and took over the studios.

And the Steven we know changed everything for audiences as well — seeming to overhaul every genre he meddled in. He made aliens intellectual by lifting UFO culture out of the cheesy Day the Earth Stood Still ethos and making it dead serious (and scientific) in Close Encounters of the Third Kind.

Inspired by (and teamed with) his friend George Lucas, he bought a whole era — the 1950’s swashbuckling serial matinee — back to life with the Indiana Jones films.

After a century of creepy shadows and hammy makeup, he breathed new visual life into the ghost story using special effects in Poltergeist. He made alien visitation sadder and more uplifting than Kramer vs Kramer in ET.

The digital effects technology he invented for Jurassic Park prompted a decade of larger-than-life blockbusters where cities were destroyed by giant spaceships, volcanoes went off and tornadoes pummeled the ground — all as realistically as they could in real life.

And it wasn’t just sci-fi or horror he revitalised. He brought World War 2 into focus for a new generation and his efforts with Schindler’s List, Saving Private Ryan and Band of Brothers were no less groundbreaking.

And then we come to his brother, Steven.

This other Steven Spielberg has been making films almost as long as the ET and Indiana Jones Steven. At times, he’s tried to emulate his brothers’ Midas touch for moviemaking by revisiting genres, like he did when he tried to bring a Boys Own Adventure/Famous Five-type yarn to the screen with Goonies, which was good fun but…

Then there were the really early days. Steven’s twin, Steven, gave us 1941, the Twilight Zone movie and got mixed up in the 1950s-science-fiction-magazine-bought-to-life TV series Amazing Stories.

After producing Who Framed Roger Rabbit for director Robert Zemeckis, he became so enamoured with the iconic Warner Brothers cartoon characters he created a new series based on them — Tiny Toons.

One of his early attempts at drama was The Colour Purple, which was a good story that had something to say, but his far more talented brother could have done it blindfolded.

Then there was the financial black hole known as Hook, the exhaustive historical hammering of Amistad, and the collective gag reflex known as Always, so laden with sugar it was enough to make you want to eat a bucket of lemons.

We were all thrilled when we heard that Spielberg was taking over the late Stanley Kubrick’s study of artificial intelligence. But Steven passed on AI and let his brother Steven do it instead. We expected one of the most exciting visions of the future and questions about the nature of consciousness. It turned out as another cute brat searches for love parable with a completely tacked on final scene where the loving, wise alien being gives the robot a requisite sappy ending.

Then we learned that he was going to direct Tom Cruise in a science fiction film questioning the nature of choice, cause and effect. Again, we quivered with excitement. And again, he decided to let Steven do it instead, and Minority Report ended up a very average chase thriller containing occasional flashes of a futuristic world.

And now, after letting his brother do Catch Me If You Can for him too, Steven’s given up his secret. Directing Leonardo DiCaprio and a very wooden Tom Hanks in a cat and mouse chase movie based on the life of cheque fraudster Frank Abagnale is the kind of job our Steven could have done in his sleep.

He’s either retired, gone on a long leave of absence or his brother — in a jealous rage at his continued success — has killed him and taken his place.

The LAPD should conduct a thorough investigation into the matter to make sure Steven’s all right wherever he is. His family are probably worried, and it would be agonising for the rest of us to have to sit through any more of his brother’s movies.