Skip to content
April 10, 2007 in The West Australian See more stories from this title 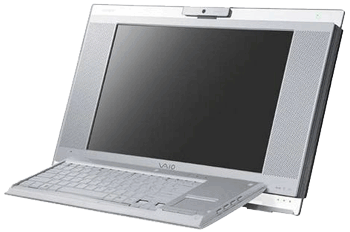 We’ve commented in The West many times about how Sony are a close second to Apple in product design. Sony knows enough about all facets of media to know consumers will buy based on what looks good.

The LA38G is a notebook PC. It’s entirely incorrect to call it a laptop because it’s designed to be used on a hard, flat surface.

Reminiscent of both a picture frame and a modern TV, the main body rests on a small support at the back that’s adjustable, letting you angle the screen back and forth. The keyboard is attached along the bottom edge, folding down for use, and the back also sports a handle that gives the machine its portability. At 4.5 kg it’s not something you can drop in carry-on luggage but it’s easy to move around the house.

The VAIO LA38G looks nothing like any computer you’ve used before, let along a portable one. With the clear plastic surround and tall speakers framing the screen it looks like a technological object d’art that you’d have in the living room as readily as the study.

Everything is in the VAIO’s slimline body — even the optical drive, giving it a far less cluttered look than most computers have. The wide screen and serious sound power also make it an impressive media PC.

But is it something you’d use to compute on? Firstly you’re paying close to $1,000 for the design, and as the old Apple campaign said, the most powerful computer is the one people want to use, not the one with the highest numbers on the box. When you can get an everyday laptop with similar specs for two thirds of the price, it’s for early adopters.

Then there’s the performance of the design in a real environment. Because of the size of the fold-down keyboard, the trackpad is off to the right hand side rather than in the middle, giving it a feel of having been ‘chucked in’ wherever it will fit.

The keys also feel a little smaller than usual, and whether they are is immaterial; the perceptions in your experience are what count. Most niggling of all is the height of the keys. Because the keyboard folds flush against the body of the computer, the keys don’t reach very high past the chassis that holds them.

Whether that becomes a problem is in the space bar. Typing fingers strike the edge of the space bar in the millimetres where it ends above the plastic casing of the keyboard. In the LA38G that distance doesn’t exist so you frequently miss the space bar, and the solution is to type much slower and be conscious of hitting it deliberately. Habit would doubtless make you more nimble fingered, but considering the number of times you hit the space bar it quickly becomes irritating.

The LA38G certainly looks like the ongoing future of escaping the beige box mindset, but it needs as much design for humans as it does for a glossy brochure.