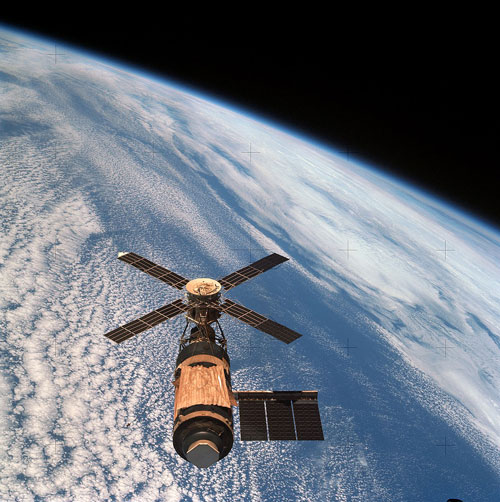 It’s 40 years since Apollo 11’s triumphant moon landing. But it’s the anniversary of another dramatic space mission that the folk in Esperance, Western Australia, will be remembering. This July marks 30 years since a 17-year-old delivery driver found his way into the space exploration history books.

It was a little past midnight on July 12, 1979 when Stan Thornton drove with his sister and her boyfriend to the town lookout to watch the fiery re-entry of the 36 metre, 100 ton Skylab – out of control and abandoned to a dramatic fate by NASA after its six year mission studying microgravity and solar activity.

“It was an unbelievable sight,” says the truck driver now living in the Perth suburb of Canning Vale. “There were all these different lights as it was burning up. It was as if you could just reach up and grab it.” Seconds after the craft passed at supersonic speed a sonic boom shook the area.

But the light show was only the beginning of the excitement. After the rain of debris on the Thornton family’s chicken shed overnight, a clean-up the next morning turned up about two dozen small pieces of burnt wood that were confirmed to be balsa wood insulation from the craft.

An SES worker inspecting the pieces for radiation heard on the local radio station, 6PM, that the San Francisco Examiner newspaper was offering a prize of $10,000 for the first piece of Skylab delivered to their offices. Thornton called the station, who arranged with Qantas to fly Thornton and his bag of charred fragments to San Francisco.

A lear jet was sent to collect Thornton after barely more than an hour, and he spent adventurous few weeks in the US before returning home to share his winnings with his mum and his boss, his share going towards a small block of land.

His home shire, however, weren’t as impressed with Skylab’s explosive return to Earth, cheekily issuing a $400 littering fine which was only paid in 2009 after a fundraising drive from US radio network Highway.