Skip to content
July 3, 2006 in People See more stories from this title 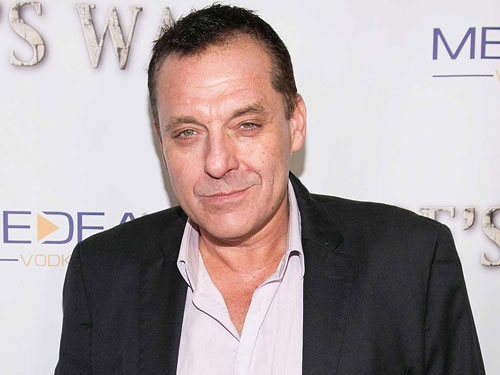 TOM SIZEMORE was one the most promising character actors in Hollywood in the 1990s. Working with topnotch directors in some of the best and most controversial films in recent history should have ensured a long, successful career. But as Tom himself once said, ‘Temptation’s impossible for me to resist… Come on. This is Hollywood. It’s in the job description.’ Temptations in the form of drugs and casual sex – together with a history of violence towards women – succeeded in derailing his career.

SIZEMORE was born in 1961 and looked up to the movie tough guys growing up. After getting his masters degree in theatre in 1986 he moved to New York, stomping ground of the most successful Italian-American actors in the world (many of whom he’d share the screen with at one time or another).

After struggling as a stage actor while waiting tables, Sizemore’s break came in 1989 when Oliver Stone cast him in a bit part in the powerful anti-war film Born On The Fourth of July.

Public and critical acclaim soon followed. Throughout the 90s, Sizemore seemed incapable of making a bad decision, working for the likes of Steven Spielberg, Michael Mann and Ridley Scott.

He was praised for bringing the iconic movie heavy he’d idolised as a kid back to the big screen, one that reminded critics and audiences of a simpler time, of the good guys and bad guys who made Hollywood great.

Of course, sordid stories of sex and drugs make Tinseltown great, too, and Sizemore didn’t let anyone down in those departments…

OF THE inevitable lures that come with money and fame, drugs were Tom’s first downfall and he was soon a hard-core user of crack cocaine, heroin and crystal meth.

Luckily, even veteran addicts like Tom don’t get the shaft in Hollywood as long as they continue to make money for the movie studios.

More an inconvenience to directors than a grave moral crisis, he admitted in an interview with entertainment web site Jam! Showbiz, “People knew I was using but they still hired me for their films. [During promotion of Devil In A Blue Dress] I was so high I don’t remember making the movie, let alone promoting it.”

Not everyone was tolerant, though. In 1998, Spielberg threatened to recast him and reshoot all his scenes if he was stoned during production of Saving Private Ryan.

A year later, friend and former Heat co-star Robert De Niro turned up at the actor’s house with Sizemore’s mother in tow, telling him he’d be driven to either rehab or jail right then and there. Tom chose rehab, an institution he’d become very familiar with over time.

If drugs had been the extent of the problem, Tom might just be another star with minders and publicists quietly keeping his bad habits outta the media. But he started losing his temper as often as he got high.

A long relationship with the LA Police Department began in 1997 when Sizemore was arrested for beating up then-wife Maeve Quinlan. Scrapes with judges over assault and battery charges have dogged him ever since.

However, the best part about misbehaving actors is their tendency to repeatedly bullshit the press. In a positively gushing piece in US magazine Smoke, Tom said with a straight face, “I really don’t talk about this anymore, not because I’m hiding anything. It’s just boring to rehash again, don’t you think?”

His appalling behaviour towards women included sexual harassment, unwelcome groping and beating up a woman up at a party in 2003.

And his acting career continued to head south.

The Madam and the mugger

He was convicted of violence, obscene phone calls and threats against Fleiss in 2003 and eventually copped a sentence of 17 months’ jail. He missed his first sentencing date because of a stint in rehab.

The judge agreed to let Sizemore walk free while his lawyers prepared an appeal, one they finally served last October. It alleged Fleiss faked photographs submitted as evidence that showed her battered and bruised, but with the friend she claims took the photos still AWOL from the court summons, Tom’s yet to serve his sentence.

Cornered by TV interviewer Donny Deutsch after leaving court on February 13 this year, Sizemore was misty-eyed, recalling; “I met Heidi on January 19, 2001. I was very lonely. Something about her interested me. I was curious, and as I got to know her, I felt great affection for her, and I thought, at a certain point, that I loved her.”

The sad thing is, it was the best movie work he’d done this decade.

It’s since made the jump to DVD titled The Tom Sizemore Sex Scandal, allowing the washed-up actor to join the ranks of other slebs turned home movie rooters, like Paris Hilton. Speaking of whom, Tom recently claimed he’d shagged the hotel heiress a few years back.

It could be just him talking shit under the influence of a controlled substance, but a photo from the party where the alleged coupling took place clearly shows them together.

Another rumour he’s spreading is he bumped uglies in front of a video camera with Elizabeth Hurley.

Tom told contactmusic.com it happened when they fell in love during the 1992 filming of action flick Passenger 57. However, he claims she broke his heart by going back to Hugh Grant.

Meanwhile, the home movie still hasn’t surfaced, so we’ll just have to take Sizemore’s word for it… which doesn’t count for much.

ALL this wild rooting eventually got too much for Tom’s knob. His management issued a statement in 2005 stating the poor lad was suffering not only from sex addiction but also priapism, better known as a painful erection.

It was claimed he could have sex ‘nine times without stopping’ which, most people would assume, isn’t a bad thing. He was said to be in the midst of ‘a massive depression’, but was making ‘tremendous progress’.

In February this year, according to Celebrity Justice, he told a court he was destitute, living in a garage in suburban LA. In March, he’s alleged to have filed for bankruptcy to stave off about AUD$18 million in legal bills.

Sizemore continues to keep busy – he currently has six movies in post-production – but they’re all Z-grade crap. Clearly, he’s not fussy about what roles he takes as long as the money covers his lawyers and blow, while the producers are probably stoked they’re scoring such a once-brilliant actor at such a bargain-basement price.

I fought the law…

AMONG Tom’s funniest drug-related exploit was being caught faking a urine test in early 2005. He used a device called The Whizzinator, which contains dehydrated wee, a heat pack to simulate body temperature and a fake penis so you can pass a clean sample while staying in a rehab clinic. Tom got busted, but at least there’s a full money-back guarantee on its web site (whizzinator.com), so let’s hope he got a refund.