Skip to content
February 3, 2014 in The West Australian See more stories from this title 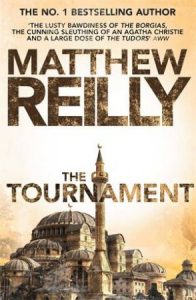 Before Matthew Reilly even speaks a word, The West wonders if we’ll be meeting a changed man.

The 39-year-old looks frozen in time, no different than the former law student who self published an action adventure novel in 1997 and was picked up by one of the biggest publishing labels in the country after the publisher saw it in a bookshop and offered him a contract.

Now a best-selling author, Reilly has a string of high-octane hits behind him – from the Jack West series (Seven Ancient Wonders, The Six Sacred Stones, The Five Greatest Warriors) and the Scarecrow books (Ice Station, Area 7, Scarecrow, Hell Island) to the more child-friendly Hovercar Racer.

A common thread amongst them all is blistering, often ceaseless action. Reilly’s knowledge (and liberal use) of weapons, vehicles, military hardware and all the ways men can die at their hands makes his books non-stop romps of activity. In the Jack West series, he adds settings of ancient booby-trapped temples and hidden treasure the likes of which would give Indiana Jones pause.

So to read a book by him that’s about intrigue, politics and deduction rather than gunfights and killings is surprising to say the least. His heroes aren’t former soldiers, mercenaries or gun-toting tomb raider-types – they’re 16th century English scholar Roger Ascham and his young student, destined one day to be Queen Elizabeth I. Instead of shooting their way into a protected fortress, they’re investigating the murder of a Catholic priest at the Constantinople palace of Suleiman, the all-powerful Sultan of the Ottoman Empire in the year 1546.

But by the time you put The Tournament down (probably only two or three sessions despite the 400-plus pages), you realise Reilly hasn’t changed altogether. As the author himself says of his latest tome; “A Matthew Reilly book will always have the fate of the world at stake.”

His inspirations for The Tournament seem to be Sherlock Holmes and – given the period – Umberto Eco’s Name of The Rose, which he says is one of his favourite books. But on deeper reflection, there’s more than just a threat to the global balance of power that makes The Tournament distinctly the work of Matthew Reilly. “It’s fast, it’s furious and hopefully gets you on the edge of your seat. It just happens to be set in 1546,” he agrees when talking about the parallels with the rest of his work. “It’d take someone far better than I am who can hide their identity as an author. Anyone who reads The Tournament will see straight away that it’s me.”

A limitation? Not in the least. Reilly says his literary idol has always been US author Michael Crichton, best known for his techno-thriller novels but also the screenwriter and sometime director behind some of the best-known movies of recent times and the creator behind the hit TV series ER. Between it all, he hopped between genres with books like The Great Train Robbery.

The other reason Reilly’s visibility as author is a good thing is because if you’re a fan, you’re in good hands. First, the blistering pace and his signature digestible prose makes The Tournament as easy as it is pleasurable to read. You also realise at some point that history – whether it’s about an elaborate underground chamber containing a valuable amulet from the time of ancient Egyptians or a Muslim palace in the 1500s – has always been a cornerstone of Reilly’s books.

“I’m sitting here in my lounge room looking at my bookshelf, and it’s about 90 percent non-fiction,” he says. “Even contemplating a new Jack West book, which is what I’m thinking about now, I don’t know if I can do that amount of research again. I threw myself into those books, finding out about all the weird and wonderful ancient places in them. You’ve just got to immerse yourself in that sort of stuff.”

The only difference with The Tournament is that Reilly’s love of history is more than just the backbone of his thrill ride – it’s vividly on show. The plot deals with a celebrated chess tournament in the heart of the Ottoman Empire hosted by the Muslim Sultan Suleiman. Some of the most notable names of Middle Ages European history are present, including Ascham, Elizabeth, Michelangelo and a host of others. Reilly even has fun with the odd in-joke such as Elizabeth unwittingly giving a young Russian noble (who’ll one day be a Czar) his nickname of Ivan the Terrible thanks to his abrasive manners.

But for the all the touchstones that make The Tournament so much at home in Reilly’s canon, it’s exciting new territory for both him and his readers. For one thing, his hero isn’t a swashbuckling soldier of fortune but a 13-year-old girl. “This was the challenge,” Reilly says about his new approach, saying Elizabeth was a pivotal figure he wanted to explore.

“In my mind it’s not about chess, it’s not even about murders. It’s about the development of a young girl who will go on to become a great historical figure. My thesis is that it was her education at the hands of a master teacher which set her along that path and this was one incident on it. As a guy in his late 30s, you try to imagine what 13-year-old girls think about and I hope I’ve done a good job with that. It’ll actually be up to the 51 percent of the population who were 13 year old girls to judge me.”

Reilly’s love of history and his fascination with Queen Elizabeth I fermented in his mind over a long period. As a high school student he used to debate against a girl’s school called Ascham without knowing who the tutor and scholar was. Then, as he says happens with every book, the muse struck and all the pieces fell into place.

“I was on holiday reading a book by a former chess prodigy,” the author says. “He was talking about competing in a chess tournament in America, and in one shining moment I wondered when the first chess tournament might have taken place, and whether it could have been in a pivotal moment in history. At the time of Ascham and Elizabeth, everbody thought the Islamic empire would take over Europe. As an author you’re just filling your brain with all sorts of things and then in one moment 12 of them just zoom in together and you’ve got your story.”

Which brings us to the other new aspect of Matthew Reilly’s oeuvre. The opening pages contain something we’ve never seen from him before; ‘This novel… contains subject matter of an adult nature. The author recommends that it be read by mature readers.’ In keeping with the gender politics of the times, sex is used as a pastime for the idle rich, a tool of political blackmail and a weapon, and it has as much a place in The Tournament as violence.

Reilly’s always been popular among YA audiences – is The Tournament a hallmark of him wanting to appeal to a new kind of reader? Not as much as it might appear, he explains – and it’s also got less to do with explicit sex than the scandals his research revealed have surrounded the Catholic Church for far longer than most people realise.

“With the exception of Hover Car Racer, I’ve always felt that I write for adults,” he says. “This book does have quite graphic sex scenes but also things about the church, and they’re adult concepts. I’m not too worried about the sex, I think that’s a part of life, but I wouldn’t want an impressionable 12-year-old reader to be reading about Catholic church paedophilia.”

Reilly also didn’t necessarily set out to write a more mature book that the story of the chess tournament subsequently suited. As it always does, The Tournament started with the characters – it was the world they inhabited that’s more mature.

“It started with looking at Ascham and Elizabeth and trying to find a circumstance where I could introduce them to this wider world,” he says. “Once I hit upon the chess tournament the adult themes came later. I wanted to have a pretty grim, almost serial killer kind of story with this wonderful, logical 16th century investigator. The adult theme came about as I populated the story.”

With publication of The Tournament, Reilly is in a new period of creative energy, saying he’s ‘really energised’ about books at the moment. He’s still very passionate about Literary Superstars, the TV show idea he’s written six episodes of and which had some traction in Hollywood before it fell victim to the 2007 writer’s strike, an experience he describes as a cautionary tale. “You decide what you want to put your energy into and Hollywood can be a black hole as far as energy is concerned,” he says. “You can work on something for two years and then it gets canned and you’ve got nothing.”

But the next book is written and due out next Christmas. A short novel is due out in May 2014. He’s considering another Jack West novel. “It’s all energy management more than anything,” he says. “I’ve got apply my energy to what I’m most passionate about.”