Skip to content
April 16, 2010 in The West Australian See more stories from this title 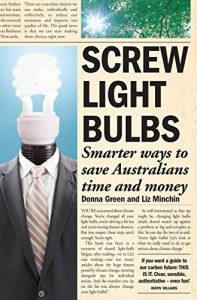 We have the beaches, the lifestyle, the great climate and a host of natural wonders on our doorstep. But did you know Perth is also an internationally respected epicentre of smart transport?

A new book out this week, Screw Light Bulbs, looks behind the green spin that’s consumed Australian politics and marketing for the last five or six years and investigates whether the climate change solutions we’re being sold will really make a difference.

Among the topics covered, Authors Donna Green and Liz Minchin have a lot to say about transport. After commercial and residential buildings, getting us from one place to another is the biggest cause of greenhouse gas emissions. It’s a unique challenge in Perth as we’re so far away from the transport infrastructure of the rest of the world. Our distance adds costs to fuel and processing, so one wonders what the Court government of the day were thinking when they shut down the Fremantle train line 30 years ago, intending to follow suit with the Armadale and Midland lines (the Joondalup line didn’t open until 1992).

Curtin University professor of sustainability and Infrastructure Australia board member Peter Newman is an elder statesman of transport infrastructure. He’s advised or overseen the social aspect of mass transit for authorities around Australian and the world, and he remembers the uproar that followed the 1979 closure and bought Perth trains back to life very well.

“It was a very sad time,” he remembers. “They replaced it with buses and immediately lost 30 percent of the patronage, and as soon as the trains were put back on the 30 percent came straight back. There was a major oil crisis in 1979 and people got very scared about a future that was totally dependent on cars and buses.”

Newman believes part of the problem — one we’ve seen the world over — has been the disproportionate influence of the car lobbies in road building policy. “That has been the case and when I ran that campaign [to get the trains reinstated] people told me I didn’t have a chance because the road lobby was so powerful and so enmeshed in government. But we won. If you’ve got public opinion on your side, the lobbyists can still sidle up and to politicians and give them nice dinners but if they’re going to lose their seats, that’s the most powerful thing community groups have in their favour. A few people in the bureaucracy still think anything a train can do a bus can do better and cheaper and it’s just not the case ”

And so, after the people as well as the figures have spoken, Perth is a model city for public transport. According to Screw Light Bulbs, state governments since 1979 have spent five times more on public transport than on roads.

“We got down to 7 million passengers a year and now we’re up to 115 million,” Newman adds, “that’s good in any part of the world. And we did it in a way that uses new technology that’s very fast compared to most rail systems, it’s double the average speed of the Melbourne and Sydney rail systems. You can literally beat the car down most corridors and that’s a significant step forward. But more importantly, it was done in a city planned around cars.”

The project seen as the biggest triumph for better transport is of course the Mandurah rail line. The Kwinana Freeway used to carry 14,000 people a day by bus. Today the rail line not only carries 55,000 people, it does it faster. It’s the sort of solution we’re going to need for the rapid population growth we’re still seeing, and Newman says we’ve already seen the consequences otherwise.

“The Mandurah Rail is a classic example of what’s needed to manage sprawl,” he says. “What it does is link you into the rest of the urban rail system where most of the jobs are, so it’s opened up possibilities for people living in those scattered outer suburbs. In America a whole series of vulnerable areas just collapsed because the people couldn’t pay their mortgages, they couldn?t afford the tripling in the price of fuel. Complete suburbs in America have been abandoned.”

But no matter what advances we make in our own city, we can’t fight the famed tyranny of distance. It’s easy for people in Sydney or Melbourne to talk about lightning fast trains replacing plane travel, but who could possibly pay for a comfortable fast train between Perth and the east? Surely not even the federal government would commit the tens of billions needed to service only 10 percent of the national population.

“Well, they said that in Perth about our rail system, that we’d never have the population base to pay for such a massive expenditure,” Newman says. “Apparently, we had enough to pay for freeways, which was just as expensive. Sometimes that sort of project is necessary to support the economy. Nobody’s now saying the Mandurah line was a waste of money because it’s an essential piece of infrastructure. All they’re saying is ‘where do we go to next?'”