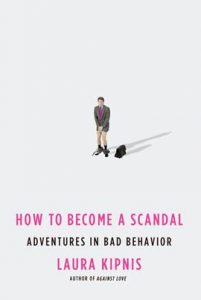 You might not have heard of Laura Kipnis but she’s one of those rare authors who wields razor sharp intellect as well as a sense of curiosity about the underlying structures that hold our social awareness aloft — often shakily.

She’s also an extremely talented writer, putting her high-minded ideas into starkly intellectual prose that often takes some sifting, but which you realise is the best possible terms to present her argument.

So it’s heartening to hear Kipnis is as human as the rest of us and such gems don’t exude from her as naturally as breathing. “I work really hard at it,” the author says over the phone from Northwestern University, where she’s a professor in the department of Radio/TV/Film. “I’m really interested in style and making the meanings known through the language so I rewrite endlessly. I’m one of these people that can never stop rewriting and I have to force myself to turn my thing in.”

Kipnis’ latest effort is an investigation of that most modern of celebrity, political and media age trappings — the scandal. In How to Cause a Scandal she puts four under the microscope, some of them largely unknown in Australia but the machinations of which we can recognise in remembering names like Lara Bingle and Ben Cousens. First is the case of Lisa Nowak, an astronaut who controlled the robotic arms of the space shuttle during a 2006 mission and who drove across the US overnight to confront and assault the woman who was seeing her boyfriend.

Second was New York judge Sol Wachtler, who – after an affair with another woman — engaged in a complicated campaign of blackmail, extortion and impersonating at least two other people to maintain his hidden life before resigning in disgrace. Third was White House worker Linda Tripp, alleged friend to Monica Lewinsky despite recording and releasing conversations between the pair about the latter’s affair with Clinton. And last was James Frey, the disgraced bestseller famously lambasted by Oprah after she’d endorsed his book A Million Little pieces and made it a bestseller before it emerged he’d made most of it up.

But Kipnis isn’t rehashing the sordid details or adding to the Womans’ Day-flavoured gossip. She’s interested in the structure, effect and our love (in the Western World) for scandal itself. She in fact signs off from our interview by thanking The West for not asking what she thinks of Charlie Sheen’s antics.

“I was trying to understand my own relations with scandal every time I picked up a newspaper,” Kipnis explains, “and nobody had really written about the psychology of scandal as a phenomenon. But it’s a really slippery subject because so much unconsciousness is involved. It was hard to grasp the theory going back and forth between the people involved in scandals and the point of view of the audience trying to figure them out.”

Because as Kipnis rightly says, there’s no scandal at all without an audience, and they may be the modern era’s version of the gladiator battles that once thrilled and sated the bloodlust of ancient Rome’s aristocrats.

The interesting thing today is that scandals can become an essential part of a celebrity brand. Think of the hard-partying rocker or bad boy actor. To Kipnis, it’s a peculiar American (and therefore Western) aesthetic rooted in the past. “You can trace it back to the Protestant confessions and conversion rituals,” she says. There was also this narrative people had to tell about themselves. Catholics did confessions too, so religious traditions have this confessional element which I guess gets taken over by our modern social structures.”

“We’re seeing people’s addictions and compulsions, their innermost lives in public. The lines between private and public lives have almost vanished and there’s so much less privacy in so many spheres. Bad behaviour does become a special sort of brand to younger generation celebrities.”

How to Cause a Scandal shows us the essential hypocrisy at the heart of our relationship with celebrities. We love them and expect them to be the paragons of moral and social life we’d like to be ourselves, but watch our glee when they reveal themselves to be human or worse — violent, misogynist or just plain stupid.

But it’s not Kipnis’ most cutting work. Aside from her delving into feminism in The Female Thing (2006), her 2003 book Against Love slaughters some very sacred cows about modern monogamy. The essential message at the centre of Against Love is the opposite to what Hollywood, the radio and popular culture has been telling us for a century but which divorce rates should open our eyes to — love definitely does not conquer all.

Surprisingly, Kipnis says she experienced more of a backlash because of later work, and that people actually found Against Love something of a relief. “I think it had something to do with style I wrote it in,” she says. “I got angry letters from the religious right and angry wives who’d been betrayed or whose spouses had had affairs, but people find [Against Love] pleasurable.

“But The Female Thing was immensely criticised. That was more of a scared cow to take on because there’s such a belief in the mythology of female progress. On one hand it’s undoubtedly true but I was trying to talk about the ways things had changed less then we’d like to think and people got really angry with that. I was surprised how violently negative some of the reviews were.”

A media scholar, Kipnis shows as firm a grasp on psychology as she does on culture. While a good portion of our commercial culture is consumed with rushing out the tale of William and Kate’s love story, (badly) ghostwritten celebrity bios and TV tie-ins, she shines a welcome light on its soft underbelly.