Skip to content
March 2, 2009 in Men's Style See more stories from this title 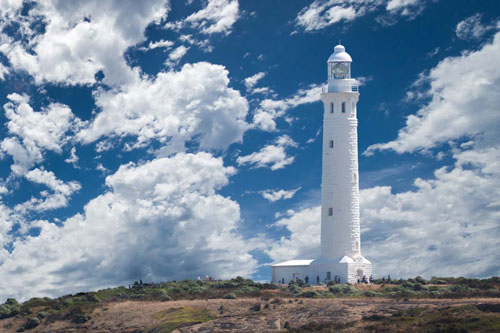 Wracking pain. Aching muscles. Wondering how you’ll get to the end of the day. Collapsing, exhausted when it’s over as you wonder how you’ll get through the next day. What can it possibly have to do with leisure?

Men’s Style is quick to realise it’s not like this for everybody riding in the inaugural Cape to Cape mountain biking event in southwest Western Australia — we’re just horribly out of condition and the ‘training’ of riding up and down the street every day for a week beforehand has left us laughingly ill-prepared.

“The best kind of training for a ride like this would be to give yourself plenty of time to prepare and get some good long rides in over a period of a few months,” says event ambassador and champion mountain biker Niki Gudex, diplomatically ignoring our own futile regimen. “You should also do some longer, harder rides two days running so your body gets used to it.”

Model, graphic designer and mountain biker Gudex fronts the Cape to Cape event thanks to her highly regarded profile in the sport and her winsome curves (which have graced the pages of magazines across the country), both of which helped make the ride bearable.

To describe the four-day, 174km event as gruelling is an understatement, but again — only if you’re unprepared. Australian champions and everyday folk who just love biking made mincemeat of the course. Beginning at Cape Leeuwin Lighthouse (on Australia’s southwestern tip) it goes overland through deep forest, flowery woodland, farmland, wineries, beaches, coastal scrub and more. Following WA’s southern cape northward, the ride takes you past some of the state’s most famous country to the finish line at Yallingup.

A little under $700 bought full service riders accommodation along the way in comfortable cabins at caravan parks, breakfast and dinner every day, transport back to their cars for the next leg of the ride and an experience they won’t soon forget.

If your experience of bicycling is rolling down the highway with semi-trailers belching smoke all over you, you haven’t even scratched the surface of what mountain biking can offer. You’ll feel the kilograms oozing off as you relentlessly pump your legs to get up some truly heartbreaking hills, then be holding on for dear life and whooping in delight as you careen down the other side at up to 70km an hour.

The first ever Cape to Cape — held in October 2008 — also took riders across all possible terrain, delighted enthusiasts rolling down a loose, rocky slope with scrub pressing in from every side, through cool forest so thick it was almost rainforest minutes later, then racing along beach sand minutes later again.

And most important was the oft-quoted refrain ‘it’s not a race’. It was one Men’s Style took full advantage of — we dismounted often to take photos of the incredible surroundings and such stops to take in the surrounds also became a very handy excuse for our appalling performance.

But even the pros agreed it was hard not to stop and smell the metaphorical roses. “It was really fun,” says Gudex when we ask her how it compares to courses she’s tackled across the world in all conceivable conditions. “I absolutely loved the location, it was stunning. With such clear aqua water and white sands I wanted to stop and swim. Because it went from two visible landmarks it made the ride feel like a real adventure.

“It was a bit more open in some sections than a mountain bike race track, but it catered for everyone. There were some really fun technical sections and it was also open enough for the more cautious rider. And not everyone was there to race — for most people it was a personal challenge, which made it much more relaxed than a typical bike race.”

It was also good to hear that even the most hardcore bikers are human. We expected Gudex (along with the handful of other pros that rode the Cape to Cape) to put their heads down and enter ‘the zone’, head down and pedals pumping. But the scenery and camaraderie won over all comers. “I really took my time and had fun out there,” she says. “I can easily get pretty excited and just want to attack and race hard the whole time, but I really wanted to talk to other riders and enjoy it for what it was.”

The Cape to Cape offered the best of both worlds — after each day’s starting buzzer, the pack spreads out and you can feel like the only person alive in such unspoiled country. If you like getting back to nature, it’s a good as camping, though much harder on the flabby white body of your average journalist. It offers the same sense of escape, of being out in the world in thrall to the beauty of nature, but the safety and comfort of a hot dinner and comfortable bed aren’t too far away.

And of course, safety was a priority and the Cape to Cape staff and volunteers left no stone unturned. Turns were clearly marked, basic provisions available at checkpoints to help if you’d suffered a blowout, minor mechanical fault or were just gasping for oxygen like we were, and the last rider was always followed by the pace truck to make sure nobody was left behind — very friendly guys we shamefully knew very well by the end.

Upwards of a hundred bicycles crashing through the pristine WA coastline sounds as ecologically sound as bringing in more cane toads, but Cape to Cape also recruited the help of environmental organisations such as Leave No Trace Australia.

The southwest corner along the coast south of Perth is Australia’s only designated biodiversity hotspot recognised by the leading authorities like Conservation International — those areas of the world where a large concentration of biodiversity is threatened.

So taking care while you ride a bike through such pristine land is crucial. Wash down stations were provided for riders at endpoints to make sure organic materials weren’t unwittingly distributed to areas they shouldn’t be in, particularly the as-yet incurable dieback disease that continues to decimate the area.

The cost of admission also included a carbon offset component, and an estimated 165kg of carbon emissions per rider were offset. After gasping for breath so badly at times, we’re sure we produced much more than our allocation of carbon dioxide and we’re still waiting for our outstanding bill.

When cross-country or endurance biking, the food rules are easy to remember;

* Gels are popular — capsules of flavoured, sugary jelly that give you a natural, sustainable sugar hit.

* Bananas are great biking food, with sugars for an energy hit and potassium that staves off muscle cramping.

* Energy bars are okay but natural foods can do the same job cheaper.

* Energy drinks like Red Bull give you a huge, short boost, but your adrenal gland will make you pay later when it crashes. The caffeine they’re based on also affects effective hydration, so you’ll drink more than you need and end up bloated.

* East a satisfying and hearty dinner the night before a ride to store up energy but eat sparingly before and during the ride itself.