Skip to content
April 14, 2017 in Moviehole See more stories from this title 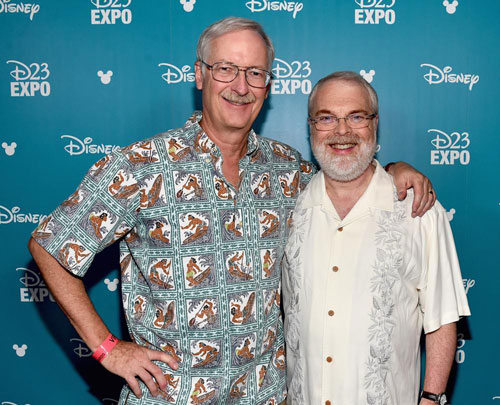 When you think of the great animation directors of our age, you might think of names like Jackson, Cameron or Favreau – live action directors who’ve overseen completely digitally rendered worlds on screen that have made us gasp, laugh and cry and which are so well put together we forget we’re watching computer graphics.

Or you might think of the likes of Walt Disney, Chuck Jones or Friz Freling, the titans of the field who inspired generations that came after them. Somewhere in between the two are Ron Clements and John Musker.

You might not know their names, but if you’re under 30 they’ve probably meant something very special to your childhood (if you’re over 30 and have kids, you’ve probably had their work on constant rotation on your DVD player).

Both starting out as animators at Disney, their debut project as directors was 1986’s The Great Mouse Detective, which was followed by the smash that put on the map (and made Disney relevant again during a dark time for animation), The Little Mermaid (1989).

It was followed by another hit, Aladdin (1992), Hercules (1997), Treasure Planet (2002), The Princess and the Frog (2009), and now the youthful early sixtysomethings return to the directors chair for Moana, the tale of a teenaged girl in ancient South Pacific on an epic adventure to find the legacy of her ancestors.

It’s not only Musker and Clements’ first film in seven years, but their first CGI animated project, and as they tell Moviehole.net in LA, stories about animated Disney princesses are still their natural habitat.

What does having a female hero offer the story that a boy wouldn’t?

It’s an interesting question. It never had a male hero, she was always conceived as having a female.

We had a very loose outline of a story before we did our research trip around the South Pacific and we really kind of threw that away except for the character of Maui [Dwayne Johnson], he was in that original version. Other than that we kind of reinvented the story and fairly early on centered it around a young girl. We’ve done other movies with young heroines but it felt interesting.

It felt more compelling because in all her adventures as a navigator she had a lot stacked against her. They were obstacles I thought would be entertaining and compelling for her to overcome. It could have worked with a young guy but I’m certainly glad we did it with a young heroine – even with me, I relate to her struggles a little bit more.

It also made in interesting to have a heroine without a romance story. In all our other movies the heroine has some kind of romantic subplot.

This was more of a hero’s journey – she really is in the story. She’s on a quest to save her people and save her world. She’s not a perfect character, she has flaws and she goes through a lot of changes, but she’s an archetypal hero in terms of that and she does come of age.

She’s a young teenager, which is an interesting age to deal with in these movies. She’s 16, still trying to find herself and discover who she is and she’s receiving all these contradictory messages from her people and her culture and trying to figure it all out.

We always have songs that are sung by the characters and for me it’s easier to imagine this compassionate song coming from a heroine rather than a 15 year old boy, I don’t know why, it just feels more convincing to me, more emotional.

We’ve always tried to do strong women in our stories and it’s been fun to write for them and for Moana our producer certainly stopped us making it too much Maui’s story when it started to veer a little bit that way.

You’re always looking for a certain kind of chemistry and a kind of relationship. Early on I think we had this True Grit kind of story with the young girl and the Rooster Cogburn relationship. That’s part of what led us down this path.

Talk about how animation works, it’s almost seems a lot of the time you’re waiting for other artists to produce things to bring you for approval rather than setting a shot up proactively.

It’s a combination of both. We’ve never done a live action movie but in its essence you almost become like a filter in terms of wanting the movie to end up with a viewpoint and a consistency.

Everybody working on it may have a different movie in their head when they come on, even if there’s a script and it’s pretty well defined, but the goal is that people start coming together and in that case it’s similar to a live action movie.

In our other movies we actually wrote the first draft of the script. This is the first time we didn’t do that, we worked with Taika Waititi, a great writer and director from New Zealand [What We Do in the Shadows], so it was about fusing those ideas.

But it was a blank piece of paper, that’s the great thing about animation, you don’t have to build the set – well you do, in the computer – but there are no limits.

And there are no weather problems.

It’s got a lot of freedom, even the fact that the voices are recorded first, it’s great for improvisations. When we worked with Dwayne Johnson and Auli’i Cravalho [Moana] we encouraged them to improvise because if they do something cool you can be spontaneous and rewrite things to make their improv work so it’s a fun, interactive thing.