Skip to content
April 3, 2012 in Girls and Corpses See more stories from this title 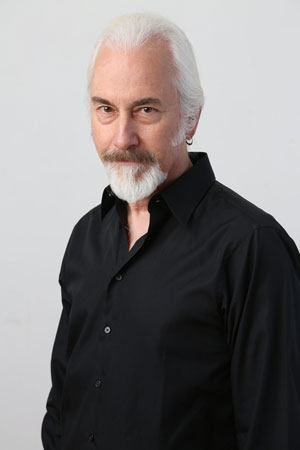 It started with a simple decision and it changed a moviemaking craft forever.

Director John Landis was doing a horror comedy as his follow up to frathouse smash Animal House (1978). Despite the laughs he wanted his take on the classic wolf man legend to look real – no cheesy cross fades between a scared looking Lon Chaney and a scared looking Lon Chaney wearing yak hair and plastic teeth. Landis wanted An American Werewolf in London to show a man turning into a wolf in living, livid colour.

Then 30-year old make-up artist and creature designer Rick Baker was already making some waves in Hollywood. Friends with effects whizzes Dennis Muren and Ken Ralston, he’d created most of the creatures in the Star Wars cantina scene that made it so iconic.

But there was only one way to do Werewolf. They could stick hair and pulsating plastic sacs to David Naughton’s face while the actor writhed on the floor of a London flat in agony. But when Landis wanted to see the snout of a wolf emerge from Naughton’s face, Baker knew there was only one way to do it. He used make-up effects, silicone rubber and an animatronic puppet for the mind-blowing shot we still judge all werewolf transformations against three decades later. It was good enough to form the recognisable image that sold the movie, but critical plaudits for Baker’s work didn’t stop there.

In 1981 the Oscars invented a new category – best make-up effects – just so they could give him one. In 2012 it was won by Mark Coulier and J Roy Helland for making Meryl Streep look like an aged Margaret Thatcher – not an exploding head or pus-oozing wound anywhere. Looking like a shaggier Steve Jobs in his younger days, Baker bounded up to the stage and finished his speech by thanking a man who he called ‘a real inspiration to me, Dick Smith, for all Dick has contributed to the art of make-up.’

How do you keep raising the bar for yourself after such a long and brilliant career?

It really is hard, especially when you’re as fucking good as I am (here Baker let loose a gale of self-depreciating laughter). A lot of times the script sparks ideas, and what I like about the Men in Black films is that I’m a real collaborator. Barry (Sonnenfeld, director) and I come up with ideas I might not be able to conceive on my own. Barry wants that collaboration and appreciates it. It’s not always appreciated.

Are designs or ideas for creatures or monsters written on the page or do you have more freedom to do what you want?

Sometimes it is on the page but often I’ll just think it could be cooler. In the first Men in Black when they’re introducing Will Smith’s character (J) to the fact that there are aliens on Earth, it took place in a bar. Tommy Lee Jones (K) says something like ‘show him, Chucky’ to this bartender. Chucky lifts up his neck and a light comes out. I told them it was lame and they said ‘you got a better idea?’ I thought when Tommy says ‘show him Chucky’, Chucky’s face opens up and there’s a little green man inside with controls and a cockpit.

They rewrote the script so it wasn’t going to be there anymore but at the time it just seemed like a missed opportunity to me. When I think something could be cool that’s the real fun for me.

Did you keep a certain influence or inspiration in mind for the alien designs?

Pretty much every 50s and 60s alien movie there ever was, but there was one in particular called Invasion of the Saucer Men. It was a 50s B movie and this guy called Paul Blaisdell made these big brain, bug-eyed alien masks that little people wore. And we got to do a saucer man. It’s not an exact duplicate – we made it a little cooler – but it was very much inspired by that.

In describing your work as a make-up artist, do you think of yourself as more a sculptor, modeller, painter, designer etc?

I’d always just called myself a make-up artist but then I realised I was taking it to another level and started doing stuff a normal make-up person wouldn’t do. I didn’t like the limitations of make-up. When you’re working on an actor’s face that’s the armature for your sculpture. If you’re putting a new nose on someone and they have a bump you can’t really get rid of it. Or if their eyes are a certain distance apart you can’t really make the distance any wider.

So that’s when I starting getting into animatronics and puppetry. In the transformation scene in An American Werewolf in London, we did what we could to a point with standard make-up and then we had two fake heads containing animatronics so they could transform on camera. That was the only way we could do it. I actually got a lot of flack from make-up artists because that stuff wasn’t make-up but to me, it was a natural evolution.

Is staying aware of the technology a way of staying relevant?

You bet. I’ve kept learning because I’ve been a fan of this stuff for as long as I can remember. Jack Pierce, the make-up artist at Universal who did Frankenstein’s Monster and the Wolfman and The Mummy and all these classic films, didn’t progress with the times. Other people were using foam rubber appliances and he was still using cotton and spirit gum and they got rid of them. And I took note of that as a kid and told myself I was going to stay on top of what’s new. But doing that’s easy because it’s just more fun.

What make-up work has really impressed you lately?

I was involved in The Curious Case of Benjamin Button, I worked with the digital guys. We made real-world silicone heads, which they scanned and made the computer models from. In the 90s CGI was kind of crappy. It was neat that they could do it but I thought the stuff we were making still looked more real. But CGI’s come a long way.

You’re known for monsters and creatures, but are human make-up effects like those we saw on Meryl Streep for The Iron Lady a whole different ball game?

They are, and I like doing both of them. Aliens are easier in a lot of ways because you don’t see aliens every day. Human make-up is the hardest to pull off. What’s hard when it comes to aliens is trying to come up with something nobody’s seen before, but if you have a defect in the rubber you can leave it because nobody would know the alien isn’t supposed to look like that.

Do you prefer monster effects because they’re a little more visible and you can get more recognition?

I just like mixing it up, I always have. Sometimes I’ll do an alien, then I’ll do the fat suit for The Nutty Professor where the characters are all human, then I’ll do a big ape suit or the Whos in Whoville or the Grinch. I just like not doing the same thing over and over again.

At this point in your career is it just professional or is it still about the love of it?

A lot of your creatures and monsters are funny, sometimes even kind. Do you prefer those kinds of characters?

Oh yeah. I’m a big Frankenstein fan and when you see Boris Karloff’s performance as Frankenstein you really have sympathy for the monster, same with Charles Laughton’s Quasimodo. We’re sympathetic because they have a heart.

In fact Harry (from Harry and the Hendersons) is one of my most favourite things I’ve done. The director came to me and said he really wanted me to do it because I give my characters a soul. I think he was like trying to butter me up but there’s some truth to that and it’s something I try to do. I don’t necessarily want to just do horrible things and killing machines.