Skip to content
March 22, 2014 in Video & Filmmaker See more stories from this title 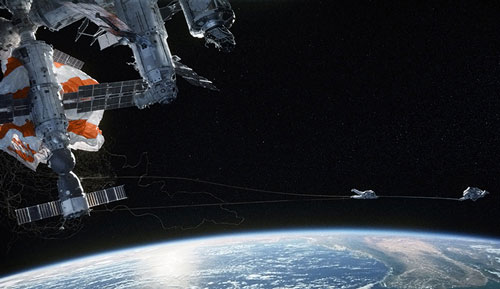 The most certain thing about Gravity was always the headlines about it ‘rocketing’ and ‘soaring’ up the box office charts, revenue going ‘out of this world’ if it was to become a hit.

Much less certain was that Gravity itself would exist at all. After Universal Pictures passed on the project, Warner Brothers picked it up and planned to cast Robert Downey Jr and Angelina Jolie.

But if the box office, critical and audience reaction has proven anything, it’s that director Alfonso Cuaron’s combination of George Clooney, Sandra Bullock, incredible visuals and edge-of-seat tension was the best possible choice.

One of thing that strikes cine-literate viewers during the awe-inspiring (and terrifying) exterior scenes is exactly how they’re done. It’s all so realistic you can easily picture Bullock and Clooney suspended in a sound stage on wires and gimbals, the Earth and spacecraft animated in later. In fact every scene of space exteriors is CGI, the actor’s faces animated onto digital backgrounds of spacecraft, the bodies of the astronauts and the nearby Earth.

So how does a production designer – a filmmaking craft traditionally concerned with overseeing the designing and building of props, sets and locations – deal with a CGI production?