Skip to content
January 3, 2009 in The Sydney Morning Herald See more stories from this title 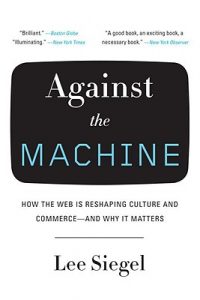 Cultural critic Lee Siegel takes a brave and wily position in Against the Machine. Those who highlight the downsides of ubiquitous connectivity usually focus on our desire for a simpler time before all this newfangled technology many of us can’t understand.

Siegel goes deeper to argue that for all the Internet’s upsides it’s also a market-friendly new face for the old ways. Among his claims is that while the Internet represents (as he quotes Time magazine) “‘the many wresting power from the few’ [sic] what they usually mean is finding a different way for the same old few to bring in many new customers.”

Countless writers have thoroughly dissected the dangers of instant gratification of everything from sexual desire to self-expression on the human condition. Siegel goes one further, asserting that our whole lives become a 24/7 economic transaction as we drift through the digital world producing and consuming.

While we’re on the Internet (and most of us in the Western world are most of the time) Against the Machine asserts that we’re putting our very leisure time up for sale, even if the transaction is a click-through banner ad, always unwittingly buying or selling — often doing both. What does the end of private ‘me’ time away from economic systems do to our collective soul? Cultural examples from 1984 to Wall.E warn us that we entrust the machinery to protect and bear us while disconnecting us from the real world at our peril.

Siegel also thinks the endless platform for self-expression makes us our own constant front-page story, breaking down many self-correcting mechanisms against our tendency to believe we’re the centre of the universe. Though far from perfect, the news media has the resources and infrastructure to present as real a picture of the world as we can manage, and we shouldn’t mistake mass opinion for informed knowledge.

Against the Machine has both deep flaws and flashes of inspiration. Positioning himself opposite such Internet champions as authors Malcolm Gladwell and Kevin Kelly, Siegel is only too happy to remind us that most of the people who talk up the Internet as nothing but a good thing make their living off it. The book’s criticism of the various cheerleaders can get confusing however, and Siegel does go too far at times. Despite trying to deflect criticisms of being a killjoy by openly acknowledging them, his unease at Gladwell’s analogy of an idea being like a virus sounds like Chicken Little. He’s seemingly unaware the metaphor is simply about the ease of transmission, not sickness itself.

But he’s correct that the Internet’s rise and power shouldn’t only be looked at in the narrow parameters of the Internet itself. As he rightly says, it didn’t spring spontaneously from nowhere and grow thanks to our collective drive to connect and express, but from the same carefully strategised economic forces that have existed for the sake of profit since antiquity. Ironically, elsewhere in the book he seems surprised to write about how the Internet has grown simply because of commerce — any economist will tell you the profit motive is the only reason anything grows in today’s world.

Against the Machine has a good premise. There’s some separating the wheat from the chaff in reading it, but the arguments feel strong and worthy of consideration. Above all, we shouldn’t forget that it might all be a bitter parting shot from a wounded ego. In 2006, the author was suspended from The New Republic when it was discovered an anonymous defender of his work among comments to his blog was Siegel himself.