Skip to content
March 1, 1999 in Seaside Observer See more stories from this title 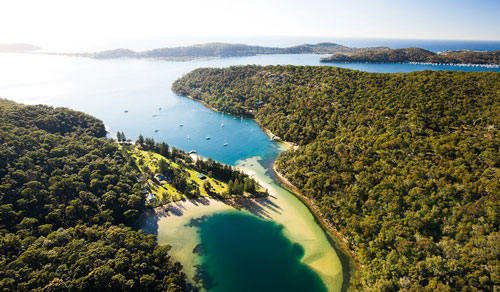 “…but Pittwater’s still a quiver of masts
and broken Bay in the sun
is seamed with tacking arrowheads
and that’s always gone on.”
– Les Murray, “Barrenjoey”

As Murray’s poem suggests, Pittwater is characterised by a breezy, unhurried lifestyle. There seems no other reason to be there except to enjoy the sunshine, water and bush. To celebrate this beautiful and ageless locality, the Manly & Northern Beaches Seaside Observer is proud to bring you our second Pittwater feature.

The Napoleonic wars couldn’t have been further from Australia in the 1700’s, but it was the name of the Prime Minister that led Britain against the French Emperor which gives one of Sydney’s most pristine areas its name. Governor Philip explored the land and water between Broken Bay and the Pacific Ocean north of the settlement at Sydney Cove and named it after his Prime Minister back home, William Pitt.

In may 1788 he wrote to Lord Sydney, responsible for colonial affairs; “I went with a longboat and cutter to examine the broken land examined by Captain Cook [from whose descriptions Broken Bay was named], immediately round the headland that forms the southern entrance into the bay there is a third branch, which I think the finest piece of water I ever saw…”. He described land that was higher than that at Port Jackson, mountaintops covered with bush where pelicans and other birds could be seen near the water in ‘great numbers’.

As settlement continued west with the establishment of farmland at Rose Hill (Parramatta) and Liverpool, interest in the Northern Beaches waned because of the travel and inaccessibility involved. Only later, when early Sydneysiders realised what tranquil beauty was on offer so close to the conditions of city life, did settlement in the form of land grants start to travel north.

Barrenjoey is supposedly the native name for a young kangaroo. Maybe the headland was once home to a species of coastal rock wallaby. Like so much more of natural Australia, the truth is lost forever in Aboriginal folklore.

The Barrenjoey Headland is a magnificent sandstone plate covered in low, thick bushland. It’s joined to the rest of the Northern Beaches peninsula by a sandbank only a few hundred metres across, Palm Beach on the eastern edge. The summit lies around 100 metres above sea level, and the path from Station Beach (on the Pittwater side of the peninsula) to the lighthouse and Customs station at the peak isn’t easy going. However, if you take the time and effort, you’ll be rewarded by some of Sydney’s most unforgiving and beautiful bushland, teeming with unique Australian flora, fauna and some of the most breathtaking views.

The Headland is generally regarded as the northernmost tip of the Sydney metropolitan area, and looks across Broken Bay to the Central Coast beaches of Umina and Ettalong. The locally famous Lion Island is perched in between, so named because it looks just like a lion lying down in the water.

West across Pittwater is the equally haunting bush of Ku-ring-gai National Park; south is Palm Beach and the rest of the Northern Beaches peninsula; to the east lies nothing but the deep blue expanse of the Pacific Ocean dotted with sailboats.

During stormy weather, Broken Bay and Pittwater were a safe haven for coal ships on their way to Sydney from Newcastle. And the first lighthouse used to guide them in? A basket containing as large a bonfire as the keeper could manage. In 1868 two wooden lighthouse towers were erected at either end of the headland, but a parliamentary move for improved protection for incoming ships meant that a more permanent facility was needed. The present Barrenjoey lighthouse was first lit in August 1881.

Although the track is freely accessible 24 hours, the lighthouse, keepers cottage and customs stations (see below) are fenced off from the public, now the property of the Maritime Safety Authority. Since 1932 it has operated automatically, and continues to this day to give four flashes of 75,000-candlepower light every 20 seconds.

Of even older history is the Barrenjoey Customs House, established in 1841 to stem the tide of smuggling into Pittwater, which was fast becoming the preferred drop off point for dealers in liquor and other contraband bound for Sydney. As an incentive for the public to do their part, the Collector of Customs issued a decree that anyone who gave information leading to an arrest and seizure was entitled to a third of the proceeds gained from the sale of the seized goods. Presumably to avoid the vengeance of foiled smugglers, informants’ identities were not to be divulged.

Community is a word always used to describe Scotland Island, and it seems to be the only word fitting this 120 acre island nestled in the south of Pittwater. Granted to a convict in the second fleet who, after his pardon, developed housing for himself and a salt extraction operation, it has since become a bohemian hideaway for artists and all those looking for a sense of isolation. The ferry trip from Church Point is a short one, but once there you might as well be a million miles away.

Despite subdivisions and permanent housing and facilities as you would find in any modern urban centre, Scotland Island remains a permanent holidayland of serenity and beauty. The bushland is still home to the varied wildlife of Pittwater, and Scotland Island will seemingly never lose its charm nestled in the calm blue waters.

After years of grants, selling and buying of lots as late as the 1920’s (during which two houses that still stand – Yamba and Bangalla – were built), Scotland Island took its present shape. Houses lie around the edge among the largely unspoiled bush of tall gum trees and the shoreline is dotted with private boatsheds and jetty wharves.

The island’s unsealed roads seem a piece of history determined to cling to the slow pace of life as it once was. For the artists, writers, performers and residents whose spirits are soothed by the serenity, sacrifices such as only having electrical power connected as late as 1965 are worth it.

There are several ways to get to Pittwater from Sydney city. The fastest is by bus. The number 190 from Wynyard Station takes you along the famous Pittwater and Barrenjoey Roads. The route offers some spectacular sights along the way – Bilgola Bends, the lush and heavy forest around Avalon and the holiday-style bustle of Collaroy and Newport Beaches.

For the most picturesque way to reach Pittwater, catch the ferry from Circular Quay to Manly and then one of the many buses that leave Manly Wharf bound for the surrounds of Pittwater. Taxis and hire car services are also available not just from Manly or the city, but throughout the Northern Beaches.