Skip to content
July 1, 2009 in Auscam See more stories from this title 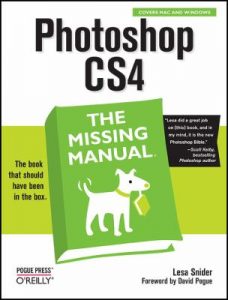 As David Pogue’s foreword explains, this is the missing manual because Photoshop is so fully appointed these days it (like every other component of Adobe Creative Suite) doesn’t even have a printed manual any more.

Photoshop seems designed and refined for the user who’s been with the program since the early days of Postscript and has much of what’s in this book on instant recall. For the dabbler, beginner or the rest of us, it delivers everything it promises.

Like all manuals it covers the extreme basics first and you’ll be tempted to bypass it, but if you do you’ll miss at least one gem you never knew that’s obvious in hidsight. At just over 750 pages there’s room for a lot more detail on every feature you know any plenty you’ve heard of but never used, and they’re all well laid out with large, helpful screenshots.

It starts a lot like the marketing material that comes with Adobe applications, listing the new features and tools. From there it covers all bases, even to the extent of telling you how to best create new files depending your creative project when such information would seem obvious.

The chapters start with the easy stuff and get progressibely more specialised, and in amongst them are workshops and break out boxes covering related information you need to be an effective user such as the difference between vector and raster images or the basics of effective scanning, even a small aside warning you of the legal minefield you’re in for if you use images off the web and the copyright owner catches you.

Though a creative tool, using Photoshop’s effectively about productivity, so the stuff you need to know is more procedural than artistic, like the best tools (or a combination thereof) to selct elements of an image. It’s a thesis the Missing Manual understands and while plenty of the tips will already be second nature to you, others which pleasantly surprise you are second nature to others, making the book pretty close to being all things to all people. It also knows what’s important and puts it in perspective the way a dry Adobe-sanctioned manual never would, such as in a title called ‘The Mighty Alpha Channel’.