Skip to content
September 24, 2015 in GQ See more stories from this title 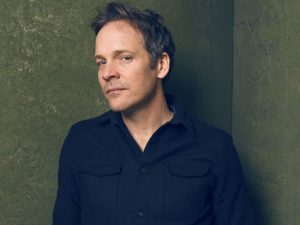 We talk to actor Peter Sarsgaard about his role as Brian Halloran in Black Mass.

Some screen personalities are just movie stars, but some truly give justice to the epithet ‘actor’. In an industry where Arnold Schwarzenegger or Tom Cruise can live extremely comfortably playing endless versions of themselves (or who the public thinks they are), it only makes performers like Peter Sarsgaard stand out further.

The 44-year-old has been described online thus; ‘baby face; soft, strangely ominous voice; often bizarre, unstable characters’. Without as much talent under the hood it might have led to an endless string of Dr Crippen-style psychos, but Sarsgaard not only confounds expectations, he does so with every role.

After playing a Russian sailor (K-19), one of magazine publishing’s foremost editors (Shattered Glass), a grave-robbing suburbanite (Garden State), a sex researcher (Kinsey), a suave loverboy bordering on creepy (An Education), the voice of a domestic robot (Robot and Frank) and a… you get the idea. Sarsgaard, it seems, can do anything, and he talks to GQ at the Toronto International Film Festival about his latest role as the coked-up, loose-lipped Brian Halloran in Black Mass.

Brian Halloran was a very impactful part but only a small one. Is there a tendency to overplay it because you don’t get much screen time?

I don’t really think in those terms. It’s written a certain way. The stakes are a certain way. He’s on cocaine and he knows he’s going to probably be killed.

I don’t ever think of big or small in terms of the characters I play. I was attracted to doing the role mainly because I knew Scott [Cooper, director] and it was about working with him. I really only seriously started thinking about what I was going to do with it after I’d agreed to do it. I was signing up for the party and then I figured it out afterwards.

Is there a method to playing such a hyped up and spaced out guy? Staying up for three days, drinking lots of Pepsi, maybe?

Nothing artificial, no. But I’ve lived. I know what things are.

You’re in three movies over the next few weeks [Pawn Sacrifice, Black Mass, The Experimenter]. You must have been filming constantly this year?

I was finishing The Slap, then I went into Hamlet, then I have been doing Magnificent Seven. But it doesn’t feel that way to me. For me, I would wake up every day and play Hamlet if I could. But I’m enough of a junkie about it that I will try to stay employed all the time.