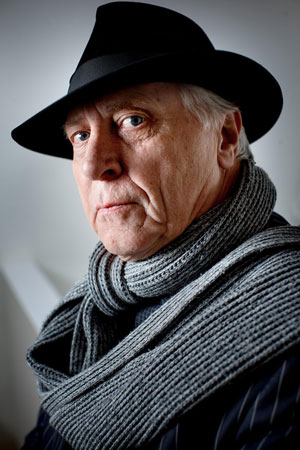 The term ‘arthouse cinema’ had barely been coined in the 1980s, but if you liked it, the chances are you loved the work of Welsh enfant terrible Peter Greenaway. His films tipped over the edge of provocative into disturbing, even sickening. His 1989 classic The Cook, The Thief, His Wife and Her Lover is a crash course in his aesthetic — the film opens with a man smearing another man with dog excrement and ends with awful-tempered restaurateur Michael Gambon literally eating the rival for his wife’s affections.

But if loved Greenaway’s work you’ve probably wondered where he’s been for the last decade or more. It might surprise you to learn he’s been working steadily — if quietly — but it will surprise you even more to learn the 69-year-old director has re-emerged as a technology geek par excellence. And his new stomping ground is Second Life, the virtual world many consider yesterday’s news.

But Greenaway hasn’t left the art behind — just the institution of modern movies. As early as 2008 he told The West that kids today will grow up rejecting the passivity of cinema in favour of games and other interactive technologies. When he spoke to us about the new mojo he’s found in Second Life, he confirms the message needs a new medium. “We’re looking for a new audio-visual format after the exhausted death of cinema. It has to be capable of handling the breadth and depth of big ideas and it has to be more immediate than cinema ever was — and what we don’t want is a digital medium that simply copies cinema. Cocteau said ‘be original or astonish me’.”

As you’d expect from an artist as smart as Greenaway, his new home in the virtual world is about much deeper themes than the oft-trod line about the consumer producing the story for himself. He calls the constraints of cinema the four ‘tyrannies’. “Number one is text,” he explains, “most cinema is illustrated text. It should have primarily been a visual medium, but nine times out of ten the visuals take second place to the narrative text.

“[Second], we must dump the idea of The Frame. Like The Story, The Frame doesn’t exist in nature. We don’t experience the world in frames, it’s a limiting strait-jacket.” Greenaway cites early Japanese painting having had no need for the concept of a frame until it started imitating Western art. “The Japanese traditionally got away without recourse to a frame – no edges, no margins, and by real and metaphorical comparison no boundaries, no limits, no need for resolutions.”

“The third tyranny is The Actor. Traditionally the actor is someone who’s been trained to pretend he’s not being watched. Actors are used most of the time to tell stories, pretend to be someone else, and most of them are asked on our behalf to f___ or die, the staple diet of world cinema. Is that what we want them to do?”

But perhaps the most telling example of the constraint of cinema is the reason Greenaway sees the freedom of story in virtual worlds as the next revolution. “Number four is the camera. It’s merely an instrument that mimics what you put in front of it and that’s not good enough. The camera is a recording instrument but in a machinima everything has to be constructed and built, truly created. Critics poke ridicule at the nature of the Second Life puppeting avatars, but do we want to make our avatars look and behave like people? Surely that is a low and maybe even miserable ambition?”

So Greenaway’s putting his money where his mouth is, talking up the development of virtual worlds like Second life as new media for storytelling. He’s on the judging panel of UWA’s Second Life Machinima video competition, and he’ll be a speaker at the winners announcement ceremony on Sunday May 22nd, where he’ll be a guest speaker through his Second Life avatar.

With 50 entries from countries as diverse as Mexico and Poland the competition’s theme is ‘Journeys’, and Greenaway’s very much on one of his own as he searches for a new paradigm not just to replace traditional films, but film altogether. “Forget the goddamed movies!” he responds when asked what the freedoms of virtual worlds can do for cinema forms. “I’m excited by the medium because it can be personalised. Maybe it should become like letter writing used to be — one to one, where everyone had his or her own handwriting. Don’t put it in the cinema, you’ll kill it.”