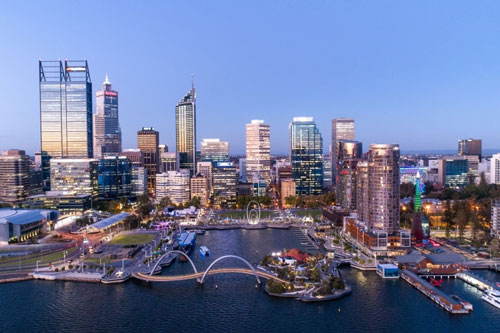 Like most Australians, Perth dwellers love the water. Unlike the rest of Australia (with the exception of Brisbane and Adelaide perhaps), Perth waterways can be enjoyed to the full. Despite the beauty of other capitals’ harbours and rivers, we have none of the junky overcrowding of Sydney Harbour, freezing southern waters of Melbourne’s Yarrah or croc-infested monsoonal beaches of Darwin.

When Perth’s metropolitan population is drawn to (and into) the Swan River and Indian Ocean, there are as many ways to experience aquatic activity as there are people who love it.

So what draws us toward the water? According to Shane King, Director of Jo Jo’s River Restaurant and Café, Nedlands, it’s somewhat of a primal thing. “We all seem to have an affinity with water,” King says, reminiscing of his own upbringing by the ocean, “it’s relaxing and calming, like being in the bush.”

It’s an affinity King capitalises on in his business. “I use the water as much as I can as a feature in our advertising.”

A different perspective is offered by Miles Hull, general manager of new Fremantle restaurant Little Creatures, right on the wharf at Fremantle fishing boat harbour. “There’s a lot more activity from the fishing boats going in and out,” Hull explains, “so there’s an open, relaxed feel and the water is as soothing as it is on the river, but there’s much more of an ocean atmosphere.”

Little Creatures doesn’t directly face the water but has a back courtyard which does, so while water frontage isn’t a selling point, according the Hull, it’s still a great feature. “The sunsets are fantastic from here and it’s beautiful and calm in the morning.” He says, “We are affected by the sea breezes and we’ve only been here six months so we aren’t sure what the winters are like.”

The more sheltered river provides a haven from seasonal ocean changes, and from Jo Jo’s, King doesn’t notice as much of a difference as his seafront contemporaries in Fremantle or along the Sunset Coast. “I don’t see the changes in the seasons,” he says, “the river just changes over the course of the day.”

For those who want their affinity with the water a bit more hands-on, there are an inordinately high number of activity and tour operators considering the population.

Fremantle Parasailing Owner/Operator Brett Higgins has seen them all. “The bulk of our customers would be between 12 and 40,” he says, “and the split between tourists and locals is really 50-50.”

Higgins also has to stay mindful of the conditions more so than most. “The conditions do change,” he says, “January is the worst time because it’s just too windy. Early mornings are the best but even in the afternoons the Fremantle Doctor can work to our advantage.”

So as he trails people behind the boat by wires up to 120 metres in the air, does he ask himself simply ‘why?’

“It’s a bit of an adrenaline rush. We can let people down to water level and then shoot them back up to full height really quickly. You don’t have to get wet but some people want to.”

Showing people the river and ocean is also a huge industry, and with popular locations that are relatively far apart such as Perth, Fremantle and Rottnest, the cruise and ferry tour industry is an important city employer and tourism service.

And according to experienced Swan River tour guide Danielle Cashmore, river cruises in particular are an experience that aren’t appreciated nearly enough by locals. “It’s the general consensus that people don’t see where they live.” she says, “Most river cruise customers are tourists.”

And the Swan River is changing right under Perth locals’ noses. Cashmore talks about the algal bloom problems from about a year ago and the program of regenerating the local fish population, in which 250,000 black bream have been released in to the river.

Also unlike the Sydneys and Melbournes of the world, Perth’s waterways are clean and teeming with life.

Our river hasn’t been without problems. Salinity, Cashmore explains, drives the black swans away. But things are changing. “I actually saw a mature black swan last week,” she says, “the first one I’ve seen actually in the river in ages. It was a really good sign. Environmental projects have meant that people are a lot more aware of what a precious commodity we have in the river.”

But from the wharf at Jo Jo’s, things couldn’t be better. “It’s clearer in summer because of the runoff,” King says, “but there are heaps of fish and dolphins. The black bream come in summer, and people sit in the café without realising there’s dolphins hunting under the jetty beneath them until they get a bit splashed. It’s a common misconception that the river is dead.”