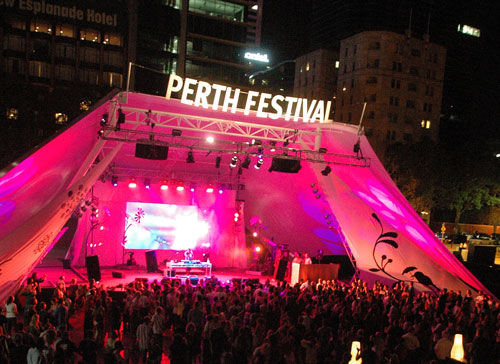 A ‘digital program’ at a major arts festival might sound like a nightmare to some – a squawking cacophony of computer games, expensive websites built with grant money that nobody looks at and self-aggrandising video clips from people who think they’re artists.

But look closer, and you’ll see the Perth International Arts Festival’s 2014 digital program is about one thing. The very notion of art, how to deliver it and how to engage with it is changing.

Girt By Sea is a good example. Accompanying a live score played by Australian band The Panics, it’s a film about our coastline, comprising short clips from the home footage of hundreds of everyday Australians showcasing their relationship to the water’s edge.

Or consider Situation Rooms, from German performance collective Rimini Protokoll. Armed with a tablet computer and headphones, audience members move through a maze of rooms exploring the stories of people whose lives have been affected by the weapons industry.

Welcome to arts in 2014. It’s going digital, crowd sourced and many other buzzwords we’re already used to from the business sector, and as Festival director Jonathan Holloway explains, incorporating a digital program was as necessary as it was exciting. “The festival has to stay relevant,” he says, “it has to stay at the absolute cutting edge. We were the first festival to do film, jazz and classical music in Perth, and digital is just the next new frontier. There’s so much interesting work being made digitally and the way artists are approaching technology is constantly changing.”

The idea of using digital technology as a member of an arts audience might fill some of us with horror – aren’t our lives already over-saturated with tweets, clickthroughs and invitations to crowd-source? Maybe, but to Holloway, there’s a difference. It’s not about just putting another screen in front of you. “When digital technology is used well, it amplifies the relationship between the audience member and the arts,” Holloway believes. “It puts the audience member absolutely at the heart of the work.”

PIAF digital producer Michelle Glaser agrees. A veteran of Screen West and the Department of Culture and the Arts, who’s worked across all art forms, Glaser calls her post at the festival an ‘ideal coming together’ of the different strands of her career. “I think we’ve moved to a point where audiences don’t differentiate between something being digital, film, TV or the arts. They just want to see great things,” she says.

Glaser also remarks on the danger of the performance being about the technology – having tools and gadgets overshadow the experience, by saying the ‘mission statement’ has to stay clear. “The focus always has to be on experiences and stories,” she says. “If you can’t talk about an experience in terms of what it is outside the tools it’s probably not a strong enough experience.”

Both festival director Jonathan Holloway and Glaser express excitement about the technology and how it can free artists, democratising their relationship with the audience when there’s no gatekeeper who has to approve the work.

Which brings us to one of the largest themes of the PIAF 2014 digital program, crowd sourcing – the term for asking people anywhere and everywhere to contribute to a project thanks to technologies like the web, digital photography and social networks to get the message out.

It’s another new tool in the art world Glaser’s excited to be working with. To her, finding and working with great art in the digital realm mirrors the digital experience most of us are already used to. “When we’re online we’re always looking to what our friends and ‘taste-setters’ recommend.”

Of course, ask people far and wide across the internet to contribute art and you’re going to be surprised – if not disappointed. We’re not all artists, after all. Won’t a swarm of bad art from the mass of contributors dilute the sharpness of the artist’s intent? Something both Glaser and Holloway agree on is that digital art isn’t just in the collecting, it’s in the curating.

“I don’t think there’s a risk of [dilution],” Holloway says. “We’re asking people to add to what’s there. I love the idea that anyone can have a go. After all, you do need a certain skill set to make what you have into something that’s worth travelling and paying money to see, and what we’re doing is augmenting that.

In the same way a great website or magazine or collection of short stories will pull contributions together from different people, it’s all in the editing. It’s all in the way you choose to frame the content. Those choices remain as rigorous as ever, the material is just sourced from further afield.”

In the best traditions of the producer-as-consumer ethos that characterises the digital age, digital technology isn’t just changing audience engagement, it’s changing the whole remit of the performing arts. “The number of ways you can tell a story is increasing by the day,” Holloway says. “Even talking about it in this article might be read on six different type of platform. We can no longer say one set of experiences is more valid than another.”

And in a kind of ricochet effect, more digital technology in performances and installations mean the task facing festival programmers and organisers is changing, with the very definition of theatre and film constantly shifting.

“It’s a different animal every single time with different requirements,” is how Michelle Glaser describes the process of putting each new piece in the digital program together. “The tasks from day to day job are very varied. We have a huge array of arts experiences within the traditional world which are using digital, but there’s also plenty of scope to develop new works that will be very much native to digital. It’s a bit of a watch this space position.”

So while Holloway, Glaser and their staff are watching for what happens next, audiences walking around carrying iPads, sending their own clips to be edited into a movie and even tweeting their responses to performances while they’re happening are also watching closely to see where digital can take PIAF.