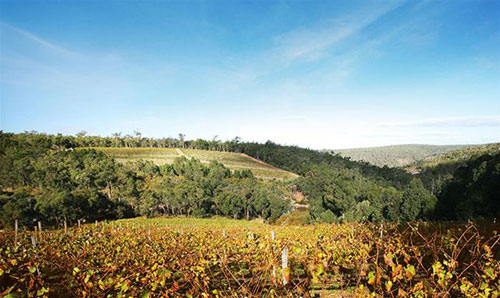 What prompts an intelligent, business-minded woman to love Llamas?

When owner/manager Wendy Fandry found herself in charge of a 30 acre property in the beautiful Perth Hills following her divorce, she had no way of knowing she’d be creating an icon.

The property was on the market but nobody would meet the asking price, so Fandry found herself with little choice but to run the property herself to make a living.

What she built it into is Southglen Estate, a hideaway in beautiful surrounding bush that caters to couples who, as she says, have ‘done it all’, and want something intimate, romantic and different.

Now that it’s winter, Southglen offers luxurious accommodation, walks and fine dining that you can enjoy with a roaring fire, a little pampering and your unusual dining and walking companions.

Silent, poised and noble, one or two of the estate’s 30 llamas will accompany you on the trail to during your evening walk into the bush for dinner in a secluded and bushy spot.

They sit quietly on a rug in the house, happy to keep you company for the evening whether you’re enjoying a glass of champagne or a four-course dinner.

But aren’t South America’s most user-friendly pack animals a world away from the bushy Perth Hills? To begin with, they were a security solution.

‘I had a small flock of sheep on the property and they were being taken very consistently by the local foxes.’ Fandry explains, ‘Someone told me that llamas were being used very successfully in North America to protect sheep. If a strange dog or fox appears, they don’t run away like sheep do, but gallop over and confront it, particularly if they have babies.’

Fandry became so enamoured, she fell in love with llamas and purchased a number of them. ‘I investigated llamas and became thoroughly fascinated with them.’

But for such a placid animal, they’re very effective guards. ‘They’re not a vicious animal at all,’ she explains, ‘They’re more intimidating.

And for such defensive animals, they’re disarmingly placid and tolerant. ‘Once they’re sitting,’ Fandry says, ‘they’ll sit there very happily and enjoy the experience for hours on end, chewing their cud quietly. I actually promote them being indoors so people can see how placid they are.’

While not friendly per se, Fandry describes them as being like the Siamese domestic cat. ‘I’d describe them as curious but aloof. They like things on their terms.’

So who should own one? ‘People buy llamas because they’re a lifestyle animal,’ she says, ‘they want that interaction.’

Interaction with nature seems to be a running theme in the Perth Hills. According to Diane Ladhams of the Mundaring Weir Hotel, the wildlife makes part of the experience. ‘Tourists love to get up at five o’clock and watch the roos in the garden and grounds.’ she says.

She also dispenses a word of country advice. ‘You have to watch your lunch because the magpies are a bit cheeky.’ Together with the kookaburras, honeyeaters and a finch that’s taken to watching over the proceedings from the bar runners, the wildlife and surrounding bush make the hotel the ambient Hills icon that Perth locals love so much.

Ironically, the bush isn’t the reason people initially go. ‘I love the quiet and wildlife and lovely trees,’ Ladhams says. ‘People come to Mundaring firstly for the [Mundaring] Weir and secondly for the hotel. They don’t usually come just to enjoy the bush but it’s a bonus when they get here.’

According to Ladhams, the biggest proportion of visitors are Perth locals followed by tourists and then Hills locals. But since present owner Jens Jorgensen took over 15 years ago, Mundaring Weir Hotel is a much more family-oriented place and Ladhams think people are in for a surprise.

‘Our focus is on food and entertainment,’ she says, ‘it’s somewhere you bring the family, have lunch in the garden and enjoy the birds and bush.

When asked about the past reputation for being a bikie hangout, Ladhams laughs, saying those days are long gone. ‘There are always motorcycles in the carpark, but only because middle aged city types can afford to spend $25,000 on a motorcycle. One of the local Harley tour companies actually terminates its tour here for morning tea.’

The famous Sunday Session that draws performers in the leagues of David Helfgott and Jane Rutter runs throughout summer, and in the winter the Hotel features a band every Sunday and lunch of lamb on a spit. The amphitheatre is the epicentre of the Hotel’s functions business. ‘We have about 25 weddings a year here,’ Ladhams explains, ‘and we’ve had the same conference customers for ten years.’