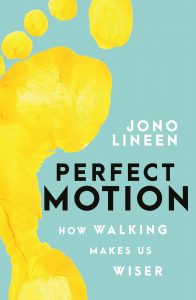 If you’ve ever been at the gym and cracked a vexing work problem out of the blue, you’ll relate to Perfect Motion. Irish born Jono Lineen isn’t a scientist, although as a former geologist’s assistant, anthropological research assistant and currently a senior curator at the National Museum of Australia he undoubtedly knows his stuff.

But Perfect Motion is as much a biography about his pursuit of long distance walking to heal from a personal trauma, an investigation that’s led to his belief about walking being one of the cornerstones of human evolutionary development.

More than just letting us stand on hind legs and move around the environment, he draws on various neuroscientific principles to argue that walking is inextricably linked to several of aspects of the human condition that have made us who we are, like creativity.

In just one example, he says it’s the rhythmic nature of locomotion that puts us in the unique state of ‘flow’ where ideas come and connect abstractly. Homo erectus, he contends, entered that state for ‘hundreds of thousands of generations’, prompting a period of unbridled technical and social advance including the exodus from our native East Africa.

It might otherwise sound like New Age mumbo jumbo, except that Lineen draws on the writing and research of experts in the field who seem to agree – he presents plenty of scientifically credible biochemical reasons (and sources) why walking changes our perspective of and mindset in the world.

Just one is the countless studies about how exercise assists learning and memory, and he delves deep into the science of how a lot of neurotransmitter functions seem to link movement with various kinds of brain activity that propagate learning and problem solving.

Structurally, the book introduces a concept and then supports it with research or quotes, seguing into anything from experiences in his own life (watching his baby son take his first steps, the long distances walks he’s done around the world party to heal from the drowning death of a younger brother) to musings about the place walking occupies in our culture.

As he rightly points out, for instance, every major religion or belief system has parables about prophets wandering on foot in their pursuit of spiritual enlightenment.

But the most surprising aspect is the quality of the prose. Lineen has a lyricist’s approach, with the first couple of pages – where he lays out his thesis – as stirring as the most beautiful poetry.