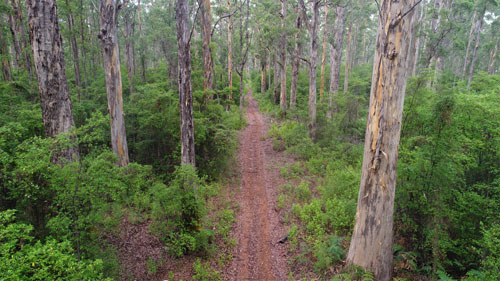 One of the biggest challenges facing the WA community is finding the right balance between protecting our natural beauty and enjoying it.

There are dozens of government departments, community and industry bodies, institutes, universities and think tanks that oversee or advise on maximising the sensitive use of our state.

Late last year, the forestry and logging responsibilities of the department of CALM fell to the Forest Products Commission. Community Consultation & Liaison Officer Peter Beatty explains how the Commission manages the southern forests. “The split was because of a perceived conflict of interest,” he says, “though the integration of forestry factors is important. CALM decides where and how logging is allowed and the Forest Products Commission puts those practices into effect.”

After several decades of logging and land clearing which had an extremely damaging effect on the forests, Beatty says the government finally got wise. “The first Forest Act was legislated in 1918. Before that, clearing and logging was unmanaged and uncontrolled, and foxes and cats were also a significant factor. Several plant communities and populations of mammals became locally extinct.”

The question now is how to manage them for the area’s newest (and ever growing) industry — tourism.

“Tourism doesn’t have a great impact on the forest ecosystem,” Beatty says, “because it’s concentrated around several localised sites like the Tree Top Walk and the Gloucester Tree.”

This low level of impact, together with reservation of forest areas by CALM, has meant that even though the logging industry is in good health, vast areas of forests can remain untouched, their ecosystems intact so they live long into the future.

The logging industry is also surprisingly benign. According to Beatty, the industry will be scaled back somewhat under the new state government, but all in all things will improve. “The reservation of old growth forest has meant that logging protest will decrease and tourism is more of a passive protest.”

While always a political hot potato, the southern Forests don’t show any signs of serious decline because of sensitive industrial, commercial and conservation management. As Beatty explains, “There’s a desire to capitalise on recreation, even from the government.”