Skip to content
April 28, 2007 in CHUD.com See more stories from this title 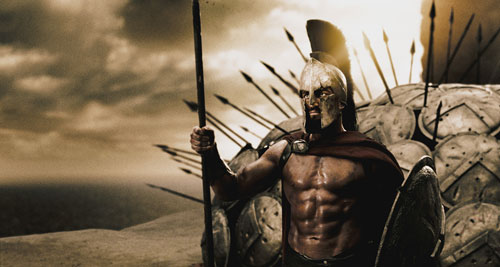 You’ve got to watch your geopolitical era when you’re making a genre-defining movie franchise. Just look at Rambo. With his superior military and tactical skills, policy isolationism and unilateral power Rambo was the Republican story, the American symbol of spreading democracy and freedom by kicking ass and taking names, destroying the world in order to save it.

Economic prosperity had soothed the American conscience about Vietnam and Watergate. Paranoid political thrillers about the government watching you, guilt trips like The Deer Hunter and soliloquies to free love like Shampoo were passé.

Reagan was your buddy. He gave you a good job and a gas-guzzler as American as old Hell. And if the ay-rabs or UN pussies told you otherwise, John Rambo would blow them higher than their heathen gods.

The good times continued under Clinton, but he was more interested in chasing tail than sending the army overseas to blow countries off the face of the map. The romantic comedy flourished under Clinton’s term; we all wanted to be young, hip, live in New York loft apartments and fall in love.

Then those ay-rabs struck again and bought the good times to an abrupt halt. The American firepower, intelligence and military infrastructure spanning the globe couldn’t stop 19 fanatics who snuck knives onto passenger flights.

Since then, movies have swung distinctly towards the right again. Less than two months after September 11th, Bush strategist Karl Rove met with Hollywood bigwigs about Hollywood’s projected role in the War on Terror.

More than five years later, Hollywood is one of Washington’s most effective propaganda arms. If the 1980s was the action decade and the 1990s the rom-com decade, so far the noughties has been the war movie decade, the equivalent of 1940s newsreels singing the glorious praises of our boys at the front.

We still see the war-is-hell refrain in war films, but they also whoop triumphantly at the bravery, the taste of battle, the glorious spillage of blood, dying for honour, for your country, for your king or president.

Nowhere is this more apparent than the newest war movie out of the gate, Zack Snyder’s 300. Even the tagline says it all; Prepare For Glory. King Leonidas (Gerald Butler) leads 300 of his men into battle to hold back the 300,000-strong Persian army. It’s hopeless. It’s a lost cause. They can’t possibly win. They’re all going to die.

But dying far from home in a mission that’s gone beyond pointless is the whole point. The glory is the point. Leonidas has been groomed to fight all his life to the extent he’s too hard to even kiss his wife goodbye, and the prospect of dying in battle is the highest honour.

Remind you of any particular hopeless cause in the world right now, where young men are taken from home and sent across the world to die to no real purpose except because retreat is worse than death?

The cultural pendulum has never swung further to the right than it is right now. Even Oliver Stone’s gone soft – using his 9/11 movie to tell another generic working-man-as-hero tale.

In years to come when we’re back to telling stories about soft people nice things happen to, we’ll realise we’ve spent the first decade of the 21st century in the thrall of a new crop of Rambo-inspired politicians, where military adventurism is laced with slightly hysterical dollops of ‘die for glory’ sentiment.

So until then, do 800 press-ups, oil down your pectorals, grit your teeth and roar as loud as you can; ‘tonight… we dine… in hell!!’