Skip to content
March 24, 2008 in SPG Media See more stories from this title 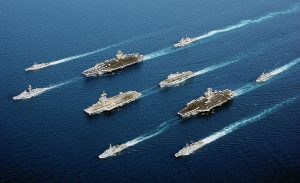 Military outsourcing is nothing new, and as Drew Turney learns, it’s still transforming the armed forces, including the Navy.

Fleet support, or outsourcing, has its roots in the early 1990s. Before then, you could be employed by the world’s armed services as everything from a professional soldier to a dishwasher, engineer, electrician, accountant, designer, machinist or cook.

When the recession of the time gripped the world, governments and big business took the lead. Departments and services employees had run for disparate and wide-ranging companies or government institutions like that of defence were closed or abolished across the board.

It was the age of core competencies, when you looked at what you were good at, concentrated as small a number of resources as feasible on it, and paid someone else to do the rest rather than maintain a huge, expensive workforce that did a little of everything.