Skip to content
April 12, 2008 in Desktop See more stories from this title 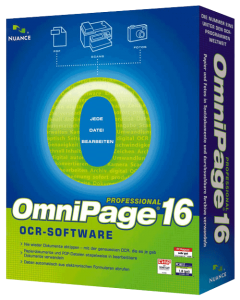 Omnipage Pro 16 is an OCR tool, and if you haven’t looked at OCR software in a long time, it’s time to revisit this underused and under-appreciated technology. Just ask yourself about the last time you saw a magazine article or important document you’d like to have a digital copy of.

Any OCR engine worth its salt will give you a speedy result that’s at least workable nowadays, and if it doesn’t it isn’t worth paying for.

So what does OmniPage Pro 16 do that’s worth shelling out as much as it costs for a low-spec PC? Publisher Nuance claims it’s 46 percent faster than the previous version, and we clocked a full A4 page of text at around 20 seconds. If you convert so many documents with OCR that you can’t afford to wait even that long you’re better off paying an expensive software developer to build a proprietary system for you.

It’s the other tools that make it so fully-featured. The one you’ll have the most fun with is the intriguing feature mentioned on the back of the box; turn your text into audio podcasts. After you’ve made your conversion, look down the list in the Save As dropdown box and you’ll find the ability to output your freshly converted text file to a .wav audio file using one of several in-built computer voices.

You’ll have great fun with it and may well create your own podcasts before you decide it’s a bit frivolous. But then it’ll dawn on you that all the time spent in the car and all those magazines you want to read could be ingeniously put together…

OmniPage Pro works by a simple process of importing, converting and outputting your project. If you have a scanner or multifunction centre the software can be configured to read directly from the flatbed and plenty of models are supported. If not, simply bring in any image file or PDF that has text, pictures or a combination of both. If you take a picture of a sign or billboard with your digital camera, OmniPage will skew or realign the image to give you the best result before converting. In the case of a PDF, we scanned one that was slightly crooked on the flatbed, and when it appeared in the OmniPage work area it was perfectly square.

There’s a range of layout options. OmniPage Pro works by assigning ‘action’ areas that create your final layout, and although you can set or draw them yourself — including the order they’re treated in — the automatic setting is just as good, leaving you with just the text in a plain document or your whole layout intact; columns, tables, radio buttons, fields, images and all. Then there’s about 30 text or image formats you can output the result to, covering almost every productivity and office program you have.

OmniPage Pro would be just as at home on a server, accessible from desktops throughout the organisation if it’s big enough. Watched folders, watched mailboxes and the ability to create and save workflows mean staff could simply drop images into a given folder and wait a short time to receive a fully editable document.

It’s built for every Windows system from Windows 2000 to Vista 64 bit, and even though it’s pricey if you’re a small, struggling or one-man studio, if you need documents converted to digital text often enough it’ll pay for itself in no time in time saved.