Skip to content
September 8, 2014 in The West Australian See more stories from this title 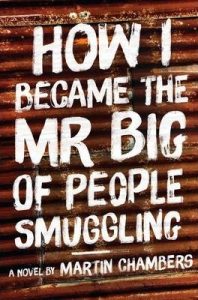 It’s a weighted question, one The West is almost scared to ask. After reading How I Became the Mr Big of People Smuggling, you’re convinced author Martin Chambers has experience with people smuggling and criminal enterprise in real life.

The reason we’re scared to ask is because if the answer’s yes, we’ll be waiting for a group of burly blokes who look like stockmen or miners to show up at our door saying the boss wants ‘a talk’?

The question – which we try to frame as innocently as possible using innocuous terms like ‘autobiographical context’ and ‘write what you know’ – is whether Chambers has really been connected to people smuggling. The reason it must be asked is because How I Became the Mr Big of People Smuggling feels like the most authentic piece of fiction you’ve ever read set in that particular world.

Thankfully the 56-year-old laughs and says the central premise was completely a product of his imagination inspired by his travels. “I’ve worked a lot of jobs, some of them in the outback,” he says. “That’s what interests me as a writer, the outback character of Australia.”

While looking around for an idea to talk about life on a cattle station, a chance meeting in Southeast Asia after a boat trip prompted Mr Big into being. “I actually met people who came onto the beach and offered to give me a couple of people and some money to take them to Ashmore Reef,” he says.

Chambers adds that while the picture we get of people smugglers from the news is of bloodthirsty, corrupt and cruel opportunists, the meeting showed him another side. “Living in Australia and reading the news here, we get the message it’s a completely immoral act and people smugglers are the scum of the earth. Yet here they were on this beach in Indonesia with no qualms whatsoever saying ‘this is what we do. This is the best thing we can do for these people’.”

Next in the process was the idea of the outback being something of a moral vacuum. “It’s not the law that inhibits your behaviour because there’s no consequence,” the Perth-born author says. “It’s just your morality. There’s no lawyer. There’s no policeman looking over your shoulder. The isolation of outback cattle stations [where Mr Big is set] is perfect for that.”

If the plot of How I Became the Mr Big of People Smuggling had been linear, lead character Nick might be seen as something of a hero, rather than just the protagonist. When fortuitous events put him in charge of a thriving people smuggling business, the book almost seems a wish fulfilment fantasy – of people smugglers who see human beings in need of help rather than monsters who only care about money and have no regard for human life.

But from the first page, Chambers blindsides the reader. The event that puts Nick in charge is brutal, shocking and paints him as something far less than heroic. Mr Big then crosses back and forth in time, unravelling the threads that lead to such an act. It’s an almost Hitchcockian approach, using an arresting incident to grab us quickly and slowly disperse the explanation behind it in its own good time.

“I wanted it to be a little bit ambiguous because we’re all like that,” Chambers says of the depiction of Nick, “We’re not heroes and villains or good and bad equally throughout our lives. I start out with this event so I want the reader to think ‘this guy’s nasty’. As readers we kind of know the main character’s going to be the hero, especially as the book’s written in the first person. So I wanted to make the reader think ‘hang on, here’s this person who’s done this really nasty thing’ and then slowly reveal that he’s changed over time and actually does have this very compassionate side.”

To achieve such a crisscrossing narrative, Chambers enlists the devices you’d expect to keep track – drawing up a map of all the key incidents in order before shuffling scenes around, some of which prompt the creation of new scenes to address things the reader doesn’t learn until later, etc.

“That’s why I love writing,” the author says of the method. “Because of the intellectual challenges, all the little pieces that you put together. In the next book I’m working on I actually have to switch between the first and third person and present and past tense between chapters. So I’m dealing with four points of view, which is challenging but hopefully it works. It’s incredibly satisfying.”

How I Became the Mr Big of People Smuggling is also an entry into a relatively recent phenomenon in entertainment. After the efforts to sell our country to the world since the 80s, we’ve mostly characterised Australia as an idyllic paradise full of cuddly animals – a picture even many Australians have grown up with.

More recently we’ve seen darker narratives as varied as Wolf Creek and Toni Collette-starrer Japanese Story (2004), where Australia can be a dangerous place full of monstrous people. “A couple of times Nick sees that the outback and desert are beautiful,” Chambers says, “he feels more at home there. But it’s a very harsh land and if you don’t know what you’re doing you’re not going to survive out here.”

With vast deserts, amoral people for whom the desperate are nothing more than a moneymaking sport and itchy trigger fingers everywhere, Mr Big is a landscape only the most quick-witted can survive. And if there’s an ‘outback organised crime’ genre, Chambers might be one of its most exciting talents. Lets just hope he keeps getting his gruesome ideas inspired by foreign beaches rather than real life.