Skip to content
April 6, 2013 in The West Australian See more stories from this title 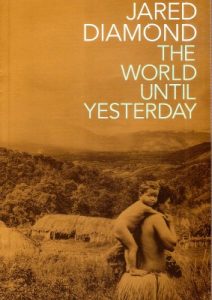 Among the novelists and long-form journalists at the recent Perth Writer’s Festival was a science luminary named Jared Diamond. If you’ve never read Diamond’s books such as Guns, Germs and Steel, The Rise and Fall of The Third Chimpanzee and Collapse, you’ve missed one of the most accessible science writers around.

He distills very fascinating wisdom about the evolution of societies, collected from a 50-year career of firsthand experience. He first travelled to New Guinea at 26 and now, at 75, has been dozens of times. By firsthand observation of societies in much more ‘primitive’ states than most of the world, he has a unique insight into human behaviour in its ‘natural’ state.

It’s knowledge he presents in his latest book, The World Until Yesterday, which reminds us that until extremely recently in our history we didn’t have cars, computers or skyscrapers we hunted for food with crude tools, were afraid and suspicious of our neighbours and shared our environment with predators.

That’s 100,000 years of conditioning not easily forgotten, but Diamond is far from a hippy suggesting we all go and live in the jungle naked like the noble savages of lore. His work has revealed what seems to be a very bloody way to live.

Which brings us to the controversy now surrounding Diamond’s work not something we normally equate with popular science. The World Until Yesterday describes a social dynamic that includes rape, murder and war on a frightening scale (the book features a photograph taken as recently as 1961 of natives from opposing tribes facing each other down with spears it was a battle that killed 125).

Diamond reports that traditional societies live on a very precarious peace but as he adds, it’s not the only defining characteristic of the human race. “If we’re war-like and violent in our natural state, you can also say we’re conciliatory and peacemaking in our natural state,” he says. ” There are people who would like a simple answer are humans violent or peaceful? We’re both.

“In Australia, just like the US, if you can’t settle a dispute with your neighbour peacefully you hire lawyers and go to court. You can settle a dispute peacefully in traditional societies too, but there are no lawyers or courts so it can turn to violence.”

But there are plenty of groups who don’t like what Diamond has to say. A body called Survival International contacted The West to call attention to an article by the director, Stephen Corry (http://thebea.st/VmELUE), which calls Diamond’s findings about the violence in traditional societies ‘completely wrong both factually and morally and extremely dangerous for portraying tribal societies as more violent than modern ones’. Survival International added that a number of West Papuan leaders have asked that Diamond apologise for his views.

Diamond points out the anthropologists, scholars and even New Guineans reviewed the manuscript for The World Until Yesterday and adds; ‘Corry’s passionate and error-laden condemnation of my book is clearly driven by something other than the facts. It’s Corry’s romanticised view of traditional societies that is really dangerous’.

“They can be a few dozen to a few hundred people in a society, so you know everybody by name and you’ve got to get along with them,” Diamond says. “If there’s an argument about your pig disappearing, you better try to resolve that dispute peacefully.

“If you or I have a car accident, it’s almost surely with someone we’ve never seen before and will never see again, so you probably don’t care whether that person hates you, which is why our court systems doesn’t care about emotional reconciliation. People in traditional societies do better at settling disputes peacefully using emotional reconciliation because they have to live together.”

So on the question of whether traditional societies really are violent, it’s hard to disagree with a man who’s spent more than half his life seeing primitive tribal groups close up. As The World Until Yesterday points out, New Guinea is so remote and hard to move around in it’s a virtual laboratory of the modern world’s absence.

It’s home to the vast majority of the world’s disappearing languages, many of them used by only a few hundred people. Early explorers took weeks to travel even a few kilometres inland through choking jungle. Another fascinating picture in The World Until Yesterday shows a man straight after meeting an Australian mine prospecting crew in the 1940s. Never having seen white faces before, the man is literally crying with terror.

Diamond, a professor at UCLA in Los Angeles, talks about what a different mindset he feels himself entering when he returns home to the city, gripped by a nervous energy about the phone calls, emails and schedules of Western life. New Guinea almost sounds as much like a holiday as study.

Actually, Diamond says it’s what brings him alive. “When I arrive in New Guinea it feels as if I’ve been asleep for the last two years and I’m finally waking up. My heart is beating faster and it’s going to be exciting for the whole time I’m there.”

In the end, Diamond’s message isn’t necessarily that we’re essentially violent or warlike. It’s simply that, as he puts it, ‘lots of people have inclinations to do bad things’. “I was born in 1937 so mine is the generation that saw the first photographs from the Nazi concentration camps.

At the time we though it was something only evil, perverted people could do. But Australia and the United States both have histories of genocide against traditional people. Just 30 years ago Cambodia killed off a quarter of it’s professional population. The fact is [the potential] lies close to the surface in all of us.