Skip to content
June 18, 2012 in The West Australian See more stories from this title 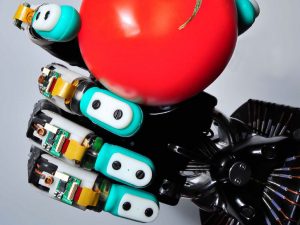 With so many advances in medical technology, it’s surprising to learn the prosthetic limb hasn’t changed much since the days of the American Civil war. Apart from cosmetic changes it’s still essentially a muscle pulling on a wire to close or open a hand or bend an elbow.

But a US amputation rehabilitation doctor might be changing all that because of a new technique that’s led to an accidental side effect.

Dr Todd Kuiken of the Rehabilitation Institute of Chicago has been working with arm amputees for many years and has seen the trauma that results. He describes the current state of the art as ‘mild electric prosthesis’, where the prosthesis responds to the electrical signals generated by the contracting of a muscle.

Muscle power can be used to drive up to six degrees of movement in modern prosthetics, but Kuiken and his team wondered whether they could tap directly into motor commands issued by the brain and transmitted down the nerves, translating them into action. The challenge was to amplify signals enough for a mad-made electrical prosthesis to discern – the electricity generated by brain commands is too miniscule to detect.

The answer was ‘targeted re-innveration’. “We need a way to connect to our nervous system and our thought process so movement’s intuitive and natural,” says Kuiken. Simply put, it involves causing the nerve to grow into new muscles that can act out brain commands. Building an artificial system would need hundred of microscopic wires connecting directly to the brain, way beyond our current knowledge of neurology. So Kuiken and his team simply shifted the natural nervous response somewhere else.

“There are four major nerves going down your arm,” Kuiken says. “We take your chest muscle and let these nerves grow into it. Now you think ‘close hand’ and a little section of your chest contracts. You think ‘bend elbow’ and a different section contracts. And we can use electrodes or antennas to read those contractions and tell the arm to move accordingly.” The results have been startling, giving amuptees degrees of speed and dexterity therapists could only dream about until now.

But there was an unexpected benefit, what Kuiken calls ‘one of those happy accidents in science’. “We were all excited to get motor commands going but after a few months we touched one patient on the chest and he actually felt his missing hand.” Incredibly, with the nerves that used to lead to the patient’s hand now growing into his chest, those muscles became stand-in hands. Hot, cold, sharp, dull and pressure down to a single gram of force can now be ‘felt’ by an extremity that isn’t there any more.

Such a discovery opens up the thrilling possibility of building sensors into a prosthetic that can report back to the apparatus in the chest. The user would then get sensory feedback from the new, artificial hand, much like the feedback a functioning limb offers the brain. “Now we have a portal to give sensation back so you can feel what you touch with the prosthetic hand,” says Kuiken.

Dr Cesar Ortega Sanchez, of Curtin University’s department of computer and electrical engineering, thinks the next step – where an artificial limb reports to the brain and gives the user full sensation and control just like a real hand – is just a matter of time

“Creating this kind of prosthetic has been a dream for many years,” Ortega-Sanchez says. “Advances in sensors and electronics are making more computational power and more sensing capability in [bodily extremities] possible.”

But when it comes to tapping into the neural command structure, he reminds us that brains are much more individualised than hands. “It’s very early days because you need to teach every individual prosthesis to understand the signals generated by the body. It’s a bit like a custom made suit – it fits someone particular but if you put it on someone else it’s not going to work without some very long prosthetic training.”

But as computing power and our knowledge of neurology increases, using muscles to amplify motor commands might make life for amputees a lot easier.