Skip to content
December 17, 2014 in The West Australian See more stories from this title 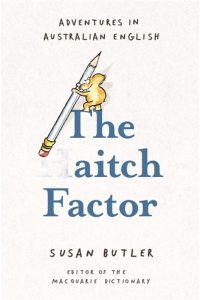 The dictionary. It seems one of those institutions of authority that’s not only immutable but exists in a special realm outside the flighty, undisciplined strictures of vernacular and culture.

Ask anyone who’s played Scrabble – if it’s not in the dictionary, it’s not a real word no matter how many people use it. Or ask well-read friends about a word (or word use) they hate and they’ll rail against the incorrect adoption of a phrase or term like they were discussing conflict in the Middle East.

So it’s a surprise to learn that someone who steers such a seemingly rigid ship as a dictionary not only has to be as aware and adept at navigating the cultural waters of language use as the rest of us, but actively wades into them.

Susan Butler is a former teacher, one of the last to teach Latin in high school before both it and classical Greek were cut from Australian syllabuses (syllabi? We’ll have to check back with her). In 1970 she applied for the job of a research assistant on a new dictionary project that would become the leading authority on the Australian version of English, the Macquarie Dictionary, and today she’s the editor. Her new book The Aitch Factor is a collection of essays, thoughts, ideas and explanations about the challenges she faces in the job and the places they come from.

The freewheeling structure of the book almost seems like a conversation Butler’s having with anyone who’s wondered how words end up in the dictionary (in one chapter she talks about the adoption and evolution of words from other languages, in another the challenges of whether ‘bushranger’ comes before ‘bush bashing’ because of the space). And as she explains to The West how that’s exactly what The Aitch Factor is, it’s clear just how plugged in to social mores and opinions about word development she has to be.

“Certainly I feel with the book like I’m addressing all the people who write and send me messages and emails and chat on radio,” she says. “It’s the conversation between the dictionary editor and the dictionary users, the people who chat to me about things they like or don’t like or whatever they think is a problem.”

As Butler adds, a dictionary isn’t nearly as rigid as we think, with terms falling in and out of use all the time. If you’re between 40 and 60, your school dictionary would never have had the word ‘dial-up’, and in another 20 years it’s likely to be as useful as ‘consumption’ (as it was once used for tuberculosis).

Headlines all over the world followed the Dictionary’s 2007 word of the year when ‘pod slurping’ was defined as ‘the downloading of large quantities of data to an MP3 player or memory stick from a computer’, the Word of the Year Committee saying it had ‘an inventive and sensuous appeal’. The fact that it didn’t catch on shows what a hit and miss affair it can be to choose words to include based on how important they’ll soon be to a language.

All of which means it makes perfect sense that Butler’s so accepting of the changing times no matter how surprising it is (the West assumed we’d be talking to the strictest ‘word Nazi’ ever in a world that has more than its fair share of them). Instead, Butler is gracefully easy-going about changes like the widespread adoption of ‘program’ when the correct Australian English is still ‘programme’, and even the notoriously mispronounced letter that gives the book its title.

“It’s important for a dictionary editor not to enforce his or her own particular point of view,” she says. “Nine times out of ten we’ll be in line with everyone else. But there’ll be a word we’ve never heard or never truly understood the meaning of, so we’re out on a limb and often we don’t notice until someone rubs our noses in it. You need to be checking what seems to be the community norm against how things are changing.”

So despite being in a position many would assume has incredible power over culture, Butler likens it to cleaning up after a party, sweeping up the mess and sorting it all away tidily (‘My job is observe, describe, record and leave it at that,’ she says).

There also seems to be a curious rise in word and grammar pedants in society in general, one that’s grown on the back of the technologies that connect us all and essentially make us all writers. Nothing makes us feel quite a superior as reading a blog post or forum comment that’s so badly spelled a semiliterate six-year-old could’ve done better, and jumping down the offender’s throat (albeit virtually) has become a 21st century pastime.

But we should remember that human speech is a messy, movable feast, and it was communicating abstract concepts that put us at the top of the food chain, not getting every term and phrase grammar-perfect. From her position being as close to ‘correct’ speech as you can get, why does Butler think we’re so picky when we gleefully deconstruct badly-worded tweets or bang the table while saying ‘I hate the way everyone says…!’?

“We invest a lot into shaping the language we as an individual produce. We’re probably the only expert in our very own form. So we do feel very strongly about it because it’s wedded to our sense of identity.”

Having said that, Butler also says that at times, we ‘expend a lot of energy on something that’s not worth it’, and the Aitch/Haitch thing is a classic example. “It’s been used as a marker of educated versus uneducated but the younger generation seems to be heading towards ‘haitch’, and there’s no problem with it, there’s no reason why you should get anguished over it.”

So next time a pedantic friend insists the word we’re using doesn’t actually exist, tell them to chill (it’s in the dictionary – informal for ‘calm down and relax’). If we get the point of what’s being said that’s all that matters, not whether it’s in the dictionary or not. Maybe it’ll end up there if enough people use it but until then, not even the editor is worried about it.