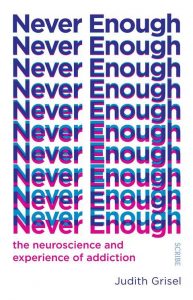 The definitive Alcoholics Anonymous program offers sufferers an informal support mentor in the shape of a sponsor, a former addict who can truly understand what participants are going through.

Grisel, a neuroscientist, is your sponsor for the journey into the neuroscience of drugs. When preparing to read Never Enough, you expect an intelligent and informed treatise on the way drugs and addiction affects the brain – and you certainly get that – but what you don’t expect is such eloquent, humanist writing by a former addict.

Disarmingly open about her own history of addiction, Never Enough is full of stories about Grisel’s decade of addiction, risky behaviour and wasted years. Tales of her first drink at 13, or feeling nothing at a beloved grandfather’s funeral because she was hopped up on Quaaludes are heart-wrenching.

Her experience comes through in language that’s both credible (liberally using the lexicon of a heavy user like ‘blitzed’ and ‘roach’) and at times quite beautiful as she talks about what statistically should have been a tragically early death.

After cleaning up, she embarked on her studies to understand and possibly cure drug addiction. As the world around us proves, the latter is much easier said than done – she discusses alcohol and caffeine (drugs that are particularly hard to dislodge socially) with just as much frankness as heroin and MDMA.

So Never Enough is full of invaluable left brain information too. Even if you never touch drugs you’ll come away an instant expert on their history, the different classes, how they affect our neurology and (therefore) why their use can be so hard to shake.

Her central thesis is the idea of neural homeostasis – that the brain has an equilibrium it works hard to return to after any experiential change, from winning the lottery or losing a spouse to snorting cocaine. As soon as a drug hits your system your brain deploys an equal and opposite reaction to return to its baseline.

When it comes to the chemistry of mind-altering drugs, the neural countermeasures offset their affects with ever-more efficiency, resulting in the characteristic need to use more to chase the same high – and feel worse when we don’t get it.

Never Enough is full of sobering statistics about drug use and abuse, and while there’s still no cure in sight, you’ll be not just much smarter about how drugs work, but more forgiving and tolerant of addicts and what they struggle with.