Skip to content
April 8, 2010 in The West Australian See more stories from this title 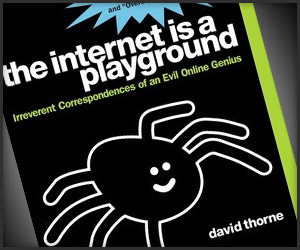 ‘People can muck about and procrastinate on the Internet but they can also build empires…’ That’s what science author Ben Goldacre told ABC last year defending the Internet and computer games against critics who clam it’s rotting young brains. In doing so, he may have summed up the entire spirit behind 27bslash6.com

The brainchild of Geraldton-born, Adelaide based graphic designer David Thorne, 27bslash6.com (a reference to Terry Gilliam’s Brazil) was a pet project for Thorne to unleash his satirical writing on unwitting victims. An early effort was the hysterical exchange attempting to pay an outstanding bill by emailing the creditor a childish drawing of a spider with seven legs, including asking for it back when they refused.

The rest is history, and Thorne woke up one December 2008 morning to find 27bslash6.com had gone seriously viral. Now it’s resulted in a book of the site’s best exploits, The Internet is a Playground. “It went from around a hundred hits a week to a few thousand hits a day,” Thorne says in our email interview (his email signature contains the disclaimer ‘This email may contain either nudity or highly personal misinformation’). “Following the spider drawing article, the server crashed after taking over half a million hits in a twenty four hour period.

“I was surprised at the popularity but not the capacity for material to spread quickly on the internet. When you’re selling your soul nine to five and you receive an email that amuses you, there’s a tendency to welcome the distraction and want to share with friends and co-workers.”

The biggest danger facing 27bslash6.com right now is that as fast as websites capture our imagination, they can be yesterday’s news (anyone remember milliondollarhomepage.com?), something Thorne’s only too aware of. “It serves its purpose of driving traffic and creating an audience which will hopefully allow me further opportunities to pursue a career in writing. I’ve also been busy writing a novel. Due to interruptions including beer, the internet and things I have to do to pay the rent, it should be available in early 2036.

But 27bslash6.com faces a unique challenge we’re calling the Borat Effect. Sacha Baron Cohen became so famous after portraying his Kazakh reporter his next film, Brüno, wasn’t nearly as spontaneous. Surely everybody’s wise to Thorne’s methods by now? “It’s already happened a couple of times but even people who’ve seen the website don’t automatically connect me to it,” he says.

So buy the book to own a piece of internet history. When it comes to the T-shirts and coffee mugs Thorne cautions; “The product quality is atrocious so I encourage people to view it as more as a donation than a wise purchase.”