Skip to content
December 1, 2007 in GQ See more stories from this title 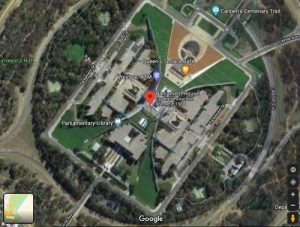 Just what is the mysterious and growing appeal of Google Earth? Drew Turney flies around the world from his desktop to find out…

Not sure if this has been posted before, but I found it quite unusual, especially in Mainland USA.

I saw the title of the post and thought, “Oh boy — yet another reflection off some building somewhere.” Boy was I in for a surprise. That’s an honest to goodness missile – in flight, no less, that Monkey Boy found. GOOD FIND!

Nope. It’s a large Bizjet, possibly a Gulfstream. Or even a Bombardier pax jet. Look at the rear nacelles. ICBM’s have one engine not two… there are two vapour trails too. Look closely at the wings… which can be seen better at an eye altitude of about 280 meters.

Sorry, Appletom, it’s an aircraft, no missile. You can’t see the full wings maybe because of their dark color. But if you look closer you can see the shape of wings.

I hate it when I’m wrong. Clue one: It’s too long to be a missile. Clue two: The dual contrails — contrails are caused by wings, a missile doesn’t really have wings, just fins. Clue three: The front of the “missile” does appear to have a cockpit. Clue four: Turn on the GEC layer and many, many people have already figured it out. And yes, I can now clearly see the wings.

What’s you’ve just read isn’t a top secret transcript from a global military air traffic control network, but a conversation on one of the dozens of web forums where devotees come together to share, discus, argue and wonder about the things they find on Google Earth.

Google Earth is one of a multitude of applications from the search engine-turned Internet’s biggest success story, and if you haven’t downloaded and played with it yet, you’re in for some late nights the likes of which you haven’t had since you first got the Internet hooked up and stayed up all night ‘just surfing’.

Originally known as Keyhole and developed by a company that combined digital graphics and the means to stream them over the Internet, Google bought the product in 2004, and Google Earth as we know it was launched in June 28, 2005. While Keyhole charged per month for access, Google followed their tried and tested modus operandi and gave the basic version of Google Earth away.

Paid versions range from $20-400 per year, but Google Earth seems to be less a commodity and more another part of the company’s ongoing philosophy to blanket both the real and virtual worlds with their name, a philosophy that — with the software having been downloaded 200 million times — seems to be working.

Like most of the successful new media companies such as YouTube and Flickr, Google neither produces nor owns the data. It’s the delivery platform waiting for the gravity of interest and demand to fill it with content. The base imagery comes from what a Google spokesman called ‘a wide range of both commercial and public sources of satellite and mapping data’, adding that the data — ‘isn’t unique. Commercial high-resolution satellite and aerial imagery is widely available from numerous sources’.

Google Earth behaves like the web itself in that you can save bookmarks of your favourite places (called .kmz files) that take you straight back to the same longitude and latitude, altitude and even viewing angle.

But moving between them is as much fun as looking. The Google Earth world is a living, spinning planet. Search for landmarks, cities or even your own address and you’ll fly across the surface of the globe, out into space and back again before zooming in to your destination. The software updates the image according to your viewing altitude until — over urban and populated areas — it’s so clear it could be a photo from a nearby helicopter.

Even then, going from the Champs Elysses to your own house is only the beginning — it’s the hope of finding something cool by accident that’s half the fun. Flying across the Atlantic Ocean to return home from Stonehenge, GQ accidentally found ourselves looking at a spindly island with settlements and an airport. It sent us on a thrilling research project believing we’d found some secret US air force base. No matter that it turned out to be the holiday island of Bermuda — it’s all about the glow of discovery.

Google Earth hasn’t been without controversies. Users on the scores of websites, forums and mailing lists have commented about the conspicuous black squares hiding presumably sensitive sites from public view. Google Australia head of corporate communications and public affairs Rob Shilkin assures us the black holes don’t come from behind Google’s doors. “We publish the imagery we receive in the format it’s given to us,” he says, “so we expect imagery concerns to be addressed by the companies and agencies that gather and distribute them.”

But now there’s a new, higher profile spectre hanging over Google’s increasingly powerful features. As the resolution of the Google Earth imagery improves, it becomes possible to zoom in further and from a lower angle. You can already fly among the buildings of many major cities, how about seeing a photo of yourself through your bedroom curtains posted online? Jokes aside, what if you were a woman and a potential rapist could enjoy such a view and plot the least visible route to your house while he’s at it?

Sure it sounds like sci-fi, but you can already find nude sunbathers on the rooftops of Netherlands apartment buildings, and a startlingly clear photo of a man getting into his car in Los Angeles has sparked a major controversy over Google Earth privacy. At the moment the imagery is refreshed anything from one to three years, but we all know how technology snowballs — how long before it’s refreshed once a day or even delivered as a constant video stream?

Some people believe the so-far untarnished Google is headed for trouble over what some are dubbing the new spyware. Others point out the imagery is available everywhere if prying eyes are determined enough. Time — maybe a high profile lawsuit — will tell.

As fascinating as Google itself however is the enthusiasts who collect from all walks of life not just to identify and share interesting finds but unlock the true power of Google Earth by turning it into a global slideshow of data from very conceivable source, engineering software that enhances the experience for themselves and millions of their fellows.

This army of spotters occasionally makes the news. You might have seen the mountainside in remote Canada that looks eerily like a Native American in full feather headdress complete with iPod headphones, or the car floating several metres above the ground in a car park beside Perth’s Swan River.

Such searches for the weirdest or most interesting sights are happening on mailing lists and forums everywhere, adherents coming together to apply their collective wisdom to the exciting conundrums that crop up — such as the apparent missile over rural Utah described above, dispelled by ‘old shape’, who turned out to be an aeronautical engineer with 30 years experience.

Some Google Earthers create software called hacks or overlays because of they way they ‘lay over’ the Google Earth interface, giving you much more than just the image. Tools either inside the software or dreamed up by users let you draw, link, attach, tag, replay, blog, save and share a dizzying array of information. It’s the literal expression of the recent web buzzword ‘datamashing’ — using or repurposing other source data to tell a whole new story about the location you’re looking at.

The best place to start is the official Google Earth community website, but don’t stop there. A search for ‘Google Earth’ in any search engine will lead you to dozens of unofficial sites with instructions on how to apply or connect your own data, lively and at times paranoid discussion about discoveries and some of the most intriguing pictures you’ll ever see.

It’s also a bandwagon being mounted by many more than just individuals with interesting things to communicate. Google Earth has been credited with everything from disaster relief to economic development. “It’s an amazing tool for visualizing complex geospatial data,” is how Frank Taylor puts it. Taylor, a 47 year old from North Carolina, has put his degrees in science and engineering to good use working for both the US defence department and NASA. Nowadays he makes a living as a software entrepreneur and runs gearthblog.com.

“Scientists have been using it to share data which previously required expensive or difficult-to-use software, and it’s had the effect of getting more funding because results are easier to understand and more popular,” he says. One of the most popular destinations in Google Earth at the moment is Darfur, whose profile has been raised in part by aid organisations highlighting human rights crises. Part of their awareness raising has been to make such hotspots easy to find and learn about simply by connecting the richness of information about the area to Google Earth.

So what makes a devoted Google Earther? “As a user it’s a fun tool to explore the world,” Taylor says. “As a blogger it gives me many wonderful things to write about on a daily basis.”

“I have place marks for my house, the spot I proposed to my wife and many other places,” adds Jim Schwarzbach, a 46-year-old sales and marketing director from Wisconsin. “We spent a week in The Dominican Republic and it was fun looking up our resort ahead of time, then again after we arrived home.”`

Of course, the real line between cute novelty and serious commercial tool on the web comes when people start to make money from something. Like Second Life, some big corporate names are starting to use Google Earth, and momentum is starting to build.

In August 2006 British Airways became the first airline to mesh the technology with their website to let travellers plot their course. Specialist freelance animators are making a living creating complex presentation videos of Google Earth travels with stories to tell along the way. And there’s the trailing tail of commercial opportunity, such as writing a popular blog about Google Earth and making money from clickable ads using services like Google’s own Adsense.

In the end though, Google Earth is a virtual Earth in the true sense. Instead of information being pinned to a morass of web pages and blogs, you can fly between cities, towns, deserts and the middle of the ocean, check a box to make an information layer visible and be met with a scattering of icons, each one a million stories waiting to be told.

US user Jim Schwarzbach unintentionally sums it all up. “I recently bought a GPS and I’ve been creating paths to show the routes I drive. It’s kind of fun replaying my journey in Google Earth!”