Skip to content
November 30, 2004 in The West Australian See more stories from this title 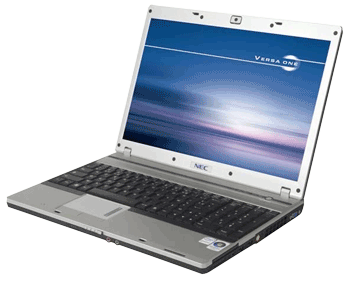 Something must be wrong with this computer.

It’s been put together exclusive to specifications by local supporter Portacom and is available in WA only through them.

Imagine you walked into a computer store and asked rattled off a list of specifications to the sales consultant that aren’t that spectacular in themselves, but which you rarely see together in a retail notebook.

Imagine you tell them you want a Mobile Pentium M Centrino 1.7Ghz chip. You want an 80Gb hard disk, and you want one that spins at 5400 rpm, not the 4200 rpm most notebook disks spin at.

You want all the usual ports and connectivity, enough USB slots for external mouse accessories, 10/100 Ethernet and inbuilt modem.

You want a widescreen 15′ monitor with the Super Shine View technology currently coming out of Asia, and you want a dual layer DVD plus and minus format burner (ie, it holds 8.5 G of data). You also want a graphics system to handle the heaviest demands of gaming or media, a ATI Radion 9600 video accelerator.

Most resellers won’t have even heard of such a machine, those that have will be clucking and shaking their heads, looking you up and down for outward signs of wealth to make sure you’re not wasting their time.

Such a machine does exist in the Versa M540, and instead of costing upwards of $4,500 (as most would if they included at least the specifications above), it’s less than $3,000.

But they haven’t stopped there. Mindful of past feedback about their sound technology, NEC has made sure the M540’s sound blows their critics away. It’s a 16 bit system with a subwoofer that will bring new life to your games and music. The bass that emerges from it on a solid surface is almost unbelievable, and the sound system also includes an internal microphone, another rarity.

It’s the 15.4′ widescreen Diamond View screen that will have your colleagues gathering around your desk though. The chassis of the machine has been very cleverly put together and space that’s been saved in one dimension has been used in another to give you a better experience — the screen uses almost the entire width of the machine, the keyboard is spacious and comfortable and the whole thing weighs only 2.8kg.

Diamond View — not to be confused with the old Mitsubishi CRT monitor series, is also called Super Shine View (SSV). It’s a special coating that goes over an LCD screen and enhances the onscreen brightness, contrast and colour depth. It looks and acts like a TV screen, and the difference when placed next to a plain LCD monitor is staggering — watching a DVD on it is like watching it through a plain, broadcast-enabled TV.

The battery life is the one aspect that doesn’t stand out a mile, but with so much power going to such a beautiful picture and the graphics card chugging some major juice — especially if you’re playing a game or watching a movie — you can expect between 2.5 and 3.5 hours out of it.

Possibly in anticipation of perceived underperformance in battery life (some recent notebooks stretch comfortably to four hours), or maybe just as another value added bonus, the M540 offers tricks to save your battery power like turning off the monitor backlight if you’re outdoors.

As always though, it’s the little things that matter, things they don’t usually put on the glossy brochure but which you really notice when you get into the swing of working. Sick of scrolling up and down through windows? Take note of the little ridge near the right hand side of the trackpad — run your finger up and down in the area it encloses and you scroll up and down in whatever active window you’re working in regardless of where your pointer is on the screen.

And if you write a lot (or for a living), someone is finally watching over you. It’s hard enough to lose the numeric keypad you take for granted on a desktop computer keyboard, but something they always seem to get rid of to save space on notebooks is either the ‘delete’ or ‘backspace’ key and the ‘end’ key is always somewhere obscure so you’re continually hitting something else by accident.

If you edit copy and use keyboard shortcuts to move through your text (so you don’t have to keep leaving the keys to use the mouse), the presence and position of all three keys is essential, and the M540 has them right where they belong.

But here’s the real kicker; when tested in benchmark comparisons, the Versa M540 outperformed other machines with faster processor, overshadowing them in graphics performance by almost twice as much. So not only have NEC applied some cool adds ons to some very powerful and state of the art machinery, they’ve constructed it to get the very best from the components, outstripping almost everything else in the M540’s class.

Not only is it possibly the best notebook around at the moment for the details as well as the specs, it’s the best price there’s been for a comparable mobile computing experience for a long time.

Something must be wrong with it for the price, but we can’t figure out what.