Skip to content
September 22, 2008 in Empire See more stories from this title 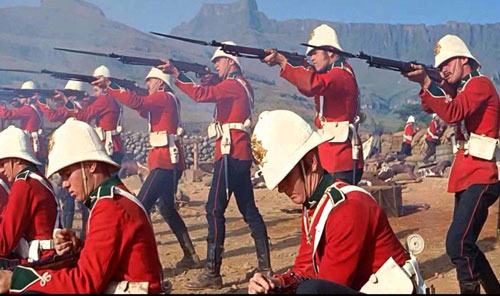 It’s been called everything from the savage continent to the New World. Spread over 30 million square kilometres, it has virtually every landscape and climate, life form and geopolitical society known to humankind. Is there any wonder our fascination with Africa never runs out? From blistering action flicks to dramas with a social conscience, Africa’s been the setting for some of the most iconic films in the history of cinema. Sad that after all the money that’s been made off Africa, it’s not much better off…

The film that introduced one Maurice Micklethwaite to the world, this true story depicts the heroic and bloody last stand by a virtually abandoned troop of British soldiers at the Rorke’s Drift outpost as they’re besieged by wave after wave of South Africa’s native Zulu warriors. It’s a comment on both the resilience and civilised nature of the British military in the years after the Boer war and the determination and bravery of the Zulus, and director Cy Endfield rivals countryman David Lean in several sweeping shots.

The Murray Burnett play Everybody Comes to Ricks was about a Moroccan transit hotspot for Europeans escaping the Nazis that happened to focus on American nightclub owner Rick Blaine when he chances to run into a former lover (‘Of all the gins joints,’ etc etc). But as history shows us, director Michael Curtiz cemented one of Hollywood’s most enduring icons in Humphrey Bogart, and the strongest template for beautiful but doomed love in Rick and Elsa (Ingrid Bergman) since Romeo and Juliet.

John Le Carre’s multi-faceted book about big pharma’s corruption testing dangerous drugs on poor Africans without telling them wasn’t quite unfilmable, but few directors could do it justice. Fernando (City of God) Meirelles’ urgent, gritty style and the blazing performances of Ralph Fiennes and Rachel Weisz (in the role that won her an Oscar) gave us a thrilling political statement dressed in moments of beautiful and emotional humanity.

Forrest Whitaker doesn’t look particularly like Idi Amin, but rarely does an actor inhabit a character so completely. Our first glimpse of him as he strides on stage to whip his fellow Ugandans into a frenzy will raise the hair on the back of your neck. Not that the film’s a one-trick pony, hero James McAvoy getting deeper into hot water until we can feel Amin’s iron grip around Uganda start to crush him as well.

The late Sidney Pollack directed some great movies, none as sweeping and lush as his love letter to the romance and beauty of the African landscapes. Meryl Streep is a Dutch wife and landowner who falls for charismatic big game hunter Robert Redford. Lots of sunset picnics and some of the most stunning cinematography you’ll ever see ensue, but where did they get such an unending stash of wine?

Like World War II, we could never run out of stories about the 1994 slaughter of nearly a million Rwandans by their countrymen, and this is just one. Swanky hotel manager Paul Rusesabagina (Don Cheadle) sees the writing on the wall too late and when chaos descends on the capital of Kigali, he hides nearly 1,000 Tutsi in his walls away from the roving Hutu killers. A combination of true-story kudos and a stellar performance by the leading man.

Still on bad terms with the government of Somalia, the American film crew instead went to Morocco to shoot the violent, action-packed tale of US soldiers stranded during a snatch and grab operation gone wrong in the Somali capital of Mogadishu. Like most US military action they probably shouldn’t have been there in the first place, but you can’t help but feel for the increasingly desperate boys pinned down under worsening fire by the circling militia.

We know all the language, customs and soundtrack from South Central LA, but the urban poor of Johannesburg is a marginalised society we’ve never seen before. When he unwittingly inherits a baby during a routine car theft, hero David finds the helpless creature worming its way into his heart, and might just teach him to respect all life — including his own.

Dian Fossey (Sigourney Weaver) arrived in Kenya to study the mountain gorilla and stayed to dedicate her life to stopping their slaughter by poachers. Jumping with both feet into the thesping master class, Weaver portrayed the rough-edged Fossey as a charmless and angry but passionate woman who didn’t care what anyone thought of her, just that she got her job done. Joined by Bryan Brown and the effects work of maestro Rick Baker, it’s sure to bring a tear to your eye.

Is it a parable for the disease epidemics that wiped out native populations during the colonial era, or just a Laurel and Hardy-inspired festival of slapstick? Possibly both as Kalahari hunter Nixau finds a Coke bottle that’s been thrown from a passing plane. His people consider the strange object a gift from the gods and when it introduces strange new behaviours like jealousy and deceit into the tribe, Nixau decides to return it from whence it came.