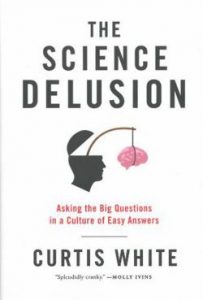 In case you hadn’t noticed, science in on the ascent. Thanks to high profile authors like Richard Dawkins, Christopher Hitchens, Steven Pinker and Lawrence Krauss, the twin pillars of experiment and reason are dictating most of what we do in society, a function that used to be filled by religion.

The problem, according to author Curtis White in his book The Science Delusion, is that such slavish adherence to everything scientists tell us is threatening to become a new, unassailable doctrine like religion itself used to be. He sees the words of Dawkins, Krauss, et al almost as edicts from the new high priests whose word cannot be challenged, and he has a problem with the new paradigm that science can answer every question we have.

He calls the practice ‘scientism’, a kind of blind faith that the scientific method provides the best understanding not only of the physical world but of religion, art, culture, economics and anything left over as well. It’s not science, White says, it’s ideology.

A particular bugbear of his is the claim of science that humans are what he calls ‘moist robots’, reducing us to mere neural activity and instinctive responses to our environment. “The book is a philosophical proposition about a better way to understand what it means to be human,” the author says. “I propose a reconsideration of the meaning of Romanticism.”

Such Romanticism-era thinking was about the search for meaning in things, often as empirically as science does today. Science, White claims, says there’s no inherent meaning, that we’re just bits of matter. But even more spectacularly, he calls writers like Dawkins and Krauss to account for what he calls ‘patent dishonesty’ in their work.

Such luminaries have got to where they are, White says, because many of us today are convinced that science is the privileged source of knowledge, and that ‘science’s only enemy is religion’. He also thinks he has the likes of Dawkins and Krauss in a bind, because while they reject any notion of expression or explanation that isn’t scientific, they constantly invoke words like ‘beauty’ and ‘perfect’ to describe it.

“Scientists can talk about beauty all they like so long as they define it,” he says. “Dawkins says ‘Science is not only true, it is beautiful’. Well, how? He seems to mean ‘elegant’, but that’s an impoverished notion of beauty.” Another impoverished approach is the way White thinks science fails to account for things we know exist like creativity and imagination, things he says can’t be pared back to mere electrical signals in living machines.

“The galling thing about the way neuroscience discusses creativity is that they seem to think we know what we’re talking about when we use the word. Unfortunately it’s mostly a marker for something we don’t really understand at all, but because it’s used so often we all tend to think we know what it means. That’s science at its most unforgivably sloppy. The idea that one specific part of the brain lit up on an MRI is responsible for a concept as vague as creativity is laughable.”

Not surprisingly, White has his share of detractors. Thanks to the idea that there’s no such thing as bad publicity, Slate.com unwittingly gave him a boost by publishing a scathing critique of The Science Delusion, which White himself was then invited to write a response to.

Psychologist, cognitive scientist and linguist Steven Pinker is one of the writers White takes issue with in The Science Delusion, and when it comes to the claim that scientists really have no place describing the field as ‘beautiful’ because there’s no scientific definition of beauty, Pinker asks; so what?

“Science isn’t a list of facts, it’s a system of explanation,” Pinker says. “It necessarily incorporates non-factual principles to guide its operation. Also, if science can be beautiful by one criterion, why is that an impoverished notion of beauty? No one has claimed that this is the only criterion of beauty. Any notion of beauty (large eyes and clear skin in a face, brightly colored rocks in a landscape) is impoverished in the sense that it does not exhaust our concept of beauty.”

Another of White’s objections – and not a new one – is that science should be held to account for the trouble its past achievements have put us in. He cites an editorial in the New York Times where Lawrence Krauss ‘complains bitterly that the “best scientists” are no longer responsible for the use of things like atom bombs that they have created. We need to be “listened to”, he laments.’ White goes on to say that he’ll ‘listen to Krause when he organises a boycott of all science grants offered by the Department of Defense. Until then, I don’t think he’s serious.’

But to Pinker, this isn’t a scientist’s job. “Science evaluates the results of its methods all the time, that’s what scientific debate consists of,” he says. “If this is to say scientific experiments cannot evaluate the moral value of findings, like whether the benefits of some technology outweigh its costs, then who ever said they did?”

If the last few years are anything to go by, with the late Christopher Hitchens and Richard Dawkins rocketing up bestseller lists for frontal attacks on religion (imagine books called God is Not Great or The God Delusion in the 1950s), the tide is turning against White and his fellow scientism critics all the time. No less than US President Barack Obama has called for funding into the mapping of the human brain. That’s exactly the kind of reductionism White has a problem with – trying to argue or even prove we’re nothing but electrical impulses and reactions.

But he has supporters as well, and contrary to what you’d expect, they’re not necessarily the religious, new age hippies or other anti-science fringes. Donald G Stein, a neurologist at Emory University, says the scientific paradigm underlying brain mapping projects is ‘at best simply out of date and at worst, simply wrong’, calling the search for a map of stable neural pathways that represent brain functions (like creativity, love or even a memory) ‘futile’.

But it might be too late, and White thinks we might already be in a new dark ages where pointing out slavish adherence to the diktats of the scientists might see you cast out of the critical debate. What he calls the narrative surrounding a reductionist approach to the mysteries we consist of, the constant reinforcement of the ‘moist robots’ line of thinking, will become ever more powerful in the near future.

Of course, nobody can deny that science has delivered us from the harsh existence of scratching out a living competing with much bigger, fiercer animals. Ironically it’s science that has given us the means for art, culture and economics. But according to The Science Delusion, we should think twice before making it our only worldview.