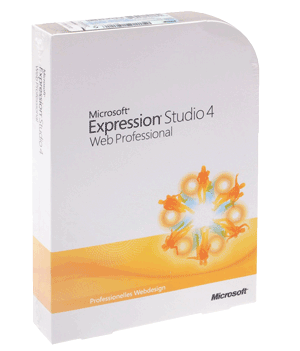 The feeling we get is of a small hyena zeroing in on the kill of a lion. The lion doesn’t really bother to stop eating as the small hyena’s no threat, but it keeps the smaller beast in sight lest it get too sure of itself. The hyena skulks in low, trying to look like the tiny piece of meat it’s going to swipe won’t put a dent in the lion’s dinner. But both of them know if the hyena can get away with a bigger bite than its size warrants, it’ll sure try.

In the above parable, the lion is the mighty, unchallenged Adobe Creative Suite, the kill is the market share of creative designers the world over, and the hyena is the brave and hopeful Microsoft Expression Web, after a slice while trying to look like it’s not.

One step it could make in the right direction is being easier to install. It’s Mac and PC compatible, and inserting the disc into a Mac looked promising, bringing up a single installer. After a suspiciously short installation period, it turned out it had only installed Expression Media, the asset management component of the software. We tried again in the PC where a splash page appeared inviting us to install each component separately, but all it did was download the installer for each part from the CD to the desktop.

After going through each installer separately we were finally ready to go. Unlike Adobe Creative Suite, Expression Studio is an online only tool. It works only in RGB, and — when it comes to the drawing component — in 72dpi by default. But there were strengths to be found.

Web is a very straightforward HTML editor that’s taken leaves out of the best of them. The main work area takes up most of the screen, and most of the tools you use day to day are spread sensibly around the outside. You can work in code, design or split view and the title bar reveals the current tag you’re working in to make selecting and actioning tasks easy.

CSS, style and tag properties can be found in other palettes around the screen and if you’re used to Dreamweaver, you’ll be right at home.Design is the vector graphics drawing tool and to our mind the best component for being easy to use and carving its own identity. If you come over from Illustrator you’ll be right at home and while you still can’t work in CMYK, you can set a higher dpi to do higher resolution graphics than the web standard.

In fact there are plenty of aspects that leave Adobe products in the dust. For instance, just holding the pointer near an anchor point changes it to the skew tool — no more digging down to buried tools or functions.Unfortunately there seems no way to import vector files from Illustrator, all the options under ‘Open’ being pixel-based formats.

You also can’t export in a vector format which cuts other software out of the picture altogether if (for example) you want to use Design concurrently with Illustrator. But the GUI has a fantastic cool dark grey finish and straightforward tool layout that makes it pleasant and intuitive to use.

Blend is a timeline-based authoring tool much like Flash, but it’s a mistake to compare the two. It relies on Microsoft’s VisualBasic and is more for application building rather than funky web animations or movies. If you’re a purely creative type and the Flash in your office is left to one of the geeks Blend won’t be of the most interest to you. Media is virtually indivisible from Adobe’s Bridge, and we’ve always been comfortable enough using the Finder or Windows Explorer for file management anyway.

Although Adobe gives you everything for half the cost of Creative Suite, it’s still pretty high for the beginner or self-financed studio. Expression Studio won’t exactly give you an ideal replacement, but it’ll get you on the way to very basic web pages, not so much the rest of the content.