Skip to content
April 27, 2014 in Moviehole See more stories from this title 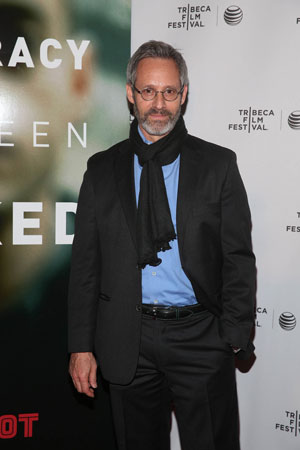 Remember ‘College Boy (uncredited)’ from the 1984 Goldie Hawn comedy vehicle Protocol? You should have kept your eye on him, you never know who’s going to grow up to be president.

That’s exactly what Michel (yes, it’s spelled wrong all over the internet) Gill went and did. After a couple of decades under the radar in roles on soap All My Children and The Good Wife, Gill ended up playing none other than President Garrett Walker opposite one Kevin Spacey in Netflix’s wildly successful House of Cards.

We asked the 53 year old about politics, acting, and being the smartest dupe in the White House at the hands of Spacey’s conniving Frank Underwood.

President Walker is a pretty good role to have in a pretty great series.

And I can never hear it enough because it’s so exciting that it’s been received the way it is. I’m just so thrilled about that.

Tell us a bit of the journey President Walker goes on in season two of House of Cards.

I think the best way to say that and not give anything away is that you’re going to see more of his humanity and get to know him a little better.

Last season he was sort of inaccessible, you had your two minutes with him and then you got out. It was about Frank trying to get into that office more to do his thing. Now he’s little closer in and so there’s more of an art to our scenes and our story.

Some people have described Garret as ‘mysterious’. Is that a good take on him?

It depends if you’re talking to the Garret Walker or you’re talking to me, and they’re very different perspectives. The perspective we get from Garret was really unexpected, doing all that sort of back door stuff with Raymond Tusk [the industrialist Walker assigned Frank to visit to sound out about the vice presidency, not realising the true mission was for Tusk to assess Frank’s suitability instead]. That created a bit of a mystery and a bit of ‘who is this guy?’ and that’s kind of cool.

He was also an interesting character in season one because out of everybody he seemed to know the least about what was going on.

That’s right, and that’s hard as an actor playing the part. If anyone asks what it’s like being manipulated by Frank Underwood he wouldn’t know what you’re talking about, because he doesn’t think he’s being manipulated at all, the audience might but from his perspective Frank’s just one of many advisors.

It must be doubly tricky because he’s a very smart guy even though he’s being played so much.

Exactly. If you read Shakespeare and look at Richard III or Iago in Othello, just twisting Othello around, you kind of ask ‘is he kidding?’ Othello’s this great leader, how can he possibly be this manipulated?

And you sit through a 3-hour production of it and really go with the journey because it’s very dramatic and classical. And [House of Cards creator] Beau Willimon has taken that model and imposed it on a very modern, contemporary, system. Frank Underwood is this terrific Richard III or Iago.

Talk about the production itself. Obviously you have to shoot and finalise every episode in the season before they’re available. Does it make it tricky to keep secrets?

I tease everybody when they ask me questions, but it hasn’t been that difficult. Everyone who works on it is closely monitored and nobody wants to spoil it, so we’re very careful about that.

Have you been flooded with offers since House of Cards?

Not right now but it’s got a little more exposure this year so I hope I get a little bit more. Actors are actors, we go from job to job and it’s a hard slog but I hope it’s opened doors.

How about the opposite effect? It’s a very visible role though in such a high profile project. Any danger of typecasting and just being the ‘president guy’?

[Laughing] I don’t know about my profile, nobody really recognises me. During hiatus I grow a beard. I don’t really know anything about what’s going on around me except for being so lucky and fortunate to enjoy this job so much. Working with Kevin and the crew has been a terrific experience.